If you’ve used up all your free trials to Netflix and Hulu, these niche streaming services can help keep you company during the holidays. 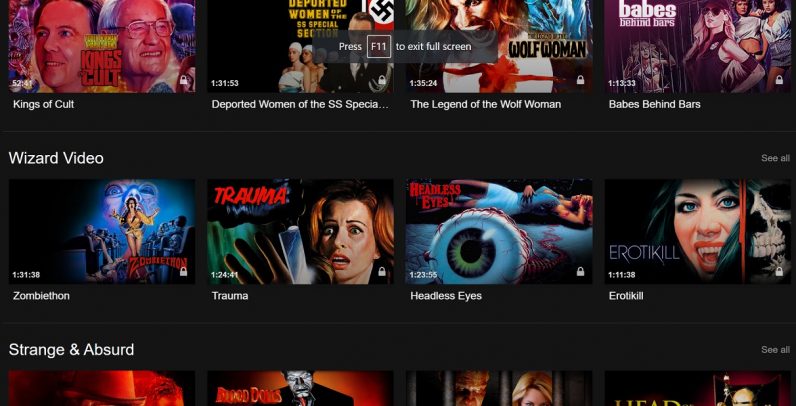 The holidays are quickly approaching and millions of students and families are about to embark on a season of travel. It’s time to start thinking about what you’re going to do with your pets, who’s going to water your plants, and whether you should just cancel all your video streaming accounts and exist on an entertainment diet of nothing but free trials.

That’s what I did, and I’ve never been happier.

Unfortunately once you’ve used up all your free trials to Netflix and Hulu, it gets a little harder to find the programming you’re used to. If you’re not willing to put up with the advertisements that come with free streaming sites, and you don’t want to go back to Prime or Netflix, you’re left with one option: go niche.

Here’s three of my favorite niche sites. These are the kind of streaming services I’d probably never pay for, but I found their free trials to be among the most entertaining periods I’ve spent watching content online.

First up, WWE Network. Yes, that’s the wrestling one with The Rock and The Undertaker. Wait, hear me out because I don’t like wrestling either. When I came across this one and saw it cost $9.99 a month my jaw dropped. Who on Earth is going to pay the same subscription fee to watch wrestling reruns as they would for everything on Netflix?

I can’t answer that question because I’m not a wrestling fan. But the site offers a 30-day free trial that’s worth every penny.

What you get is pretty damn close to every wrestling event that’s ever been on network, cable, or Pay-Per-View TV. And all of the company’s current shows and events. This includes all of the video assets related to old wrestling organizations from the 1970s, the WCW, ECW, and everything from when the WWE was called the WWF.

Plus there’s dozens of original programs, docuseries, and documentaries. I’ve spent close to 50 hours watching 1980s and 1990s wrestling shows and PPVs, such as Monday Night Raw, WCW Nitro, and Wrestlemania, just for the nostalgia. Even if you didn’t watch wrestling, everyone remembers the Macho Man Randy Savage yelling “Snap into a Slim Jim!”

Next, for those who can’t wrap their heads around WWE wrestling shows as a form of high-concept art, there’s Troma Now. Normally, this $4.99-a-month niche site wouldn’t make a lot of sense up next to an Amazon Prime subscription that includes free 2-day shipping and a better-than-nothing selection of B-movies and exploitation films (including some of Troma‘s own). But since we’re taking advantage of a free 30-day trial, let’s forget about the cost and enjoy the catalog.

Troma‘s the company responsible for such cult hits as The Toxic Avenger and Nuke Em’ High. It produces low-budget, ridiculous, schlock films with little redeeming social value, or as I call them: masterpieces. If you haven’t seen Troma‘s rendition of Shakespeare’s “Romeo and Juliet,” called Tromeo and Juliet, you’re missing out.

Fair warning, among the hundreds of titles available on the Troma Now service, a large portion of them are not family friendly. In fact, as the creators of South Park (whose Cannibal: The Musical is available on Troma Now) might say: most of it shouldn’t be watched by anyone. Seriously, if Redneck Zombies doesn’t sound like an interesting movie to you, skip this trial.

The last one I’ll mention is Full Moon Features. This is another subscription site that’s relying on the depth of its catalog to pull in niche subscribers. At $6.99 a month this one only makes sense to hardcore cult-movie fans, but the three-day trial makes it a really, really great way to spend a weekend if you live somewhere that cannabis is legal for adult recreational use. Or just in general, either way it’s free.

What you’ll get at Full Moon are some of the strangest cult-classic horror films from the past few decades. Its catalog features dozens of horror and cult movie franchises – Puppet Master and Evil Bong, among many others – and strange offerings ranging from obscure William Shatner TV shows to Nazisploitation films and fantasy epics.

Again, like the Troma site, Full Moon features a lot of not-so-family-friendly titles and some that are pretty much just smut. But if you’re in the market for a movie franchise spanning half a dozen films where Gary Busey portrays a demonic gingerbread man, or another one where an evil marijuana bong kills people, you’ll find both there.

Know any other weird, cool streaming sites with free trials? Tell us in the comments.

This article was originally published on The Next Web