Ms Hawa Hawai: Shehzaadi of the meek, the freak, the queer

Sridevi’s cavalier reappropriation of filmy womanhood ensured the rise of the “other”, the outliers and the freaks that languish in prisons of self-expression. 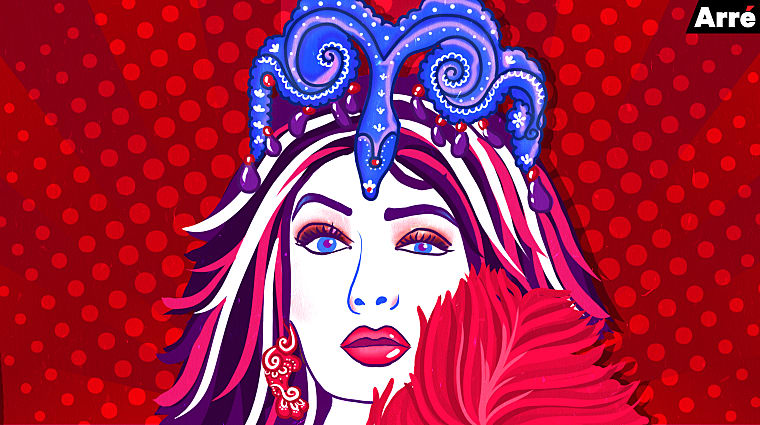 And so she came, guns blazing, sparks flying – lighting up the stage, the screen, the walls, my eyes. After waiting three excruciating weeks for Mr India’s debut on DD1, this electrifying woman had just blown all my fuses. Everyone on screen might as well have been wearing Anil Kapoor’s watch. Body draped in gems and sequins, she grew to fill the screen until there was nothing else left; until there was only Sridevi.

To a nineties kid rejected for being effeminate – which in the school playground is the sum total of hating sports, hanging out with girls, sashaying instead of walking normally – this extravagant charm didn’t just strike a chord. It turned into a full-blown symphony.

But why Sridevi? What did Ms Hawa Hawai have that appealed to an adolescent at the brink of discovering his sexuality?

Madhuri’s “Dhak Dhak”, Rekha’s “Salaam-e-Ishq”, Helen’s “O Haseena”, Zeenat’s “Jawaani Jaaneman” were just as fabulous as any of Sridevi’s item numbers. All of these women were and are queer icons in their own right.

In a time when queer and trans experiences were repurposed for comic relief, she shone as a statement of assertion.

And that’s just it. Sridevi never took herself seriously, unabashedly making jokes at her own expense, and yet somehow without compromising sensuousness. Her sexiness and her hilarity were never mutually exclusive; neither emotion took anything away from the other. All of her roles were like this, a polygon of differences amalgamated in perfect symbiosis.

Watching Chaalbaaz, us dregs of society found ourselves mirrored in Anju, long-suffering and oppressed, and learnt to find ourselves through Manju, brazen and robust, armed with a horsewhip to beat the shit out of her oppressors. And yet, both of her characters were balanced: the feminine Anju displaying blind rage against her abusive foster parents while doing the tandava, and the almost masculine Manju metamorphosing into a maternal force to protect her sister. She effortlessly broke down the binaries of gender, and looked like a total, friggin’ weirdo doing it.

Consider also the combustible portrayal of lust between sky-saree’d Sridevi and some random invisible man in Mr India’s “Kaate Nahi Kat-te”. I say random because Anil Kapoor’s presence in this song is perfunctory; he does little more than lip sync for Kishore Kumar. Sri, on the other hand, becomes the manifestation of the sexual chemistry between both lovers. Her fleeting encounters with him (grabbing at sarees, kissing napes) are interspersed by large segments composed of her simply having fun by and with herself – her sexuality independent of any man. Even at the end, drenched in rainwater, stretched out on a bed of hay – Tumne jo li angdayi hai – she nibbles on straws with a drenched fire in her eyes, leaving Mr Kapoor to chivalrously lie on a distant haystack.

This was the plurality of Sridevi, who could seamlessly mutate into distinct, intricate personalities, each of them unyielding to “log kya kahenge”.

In her portrayals, she showed the outliers and freaks that we were not solitary, that we were multitudes living inside each person, within each community. Her cavalier reappropriation of filmi womanhood embodied the rise of the “other”, of those that languish in prisons of self-expression. In a time when queer and trans experiences were repurposed for comic relief, she shone as a statement of assertion: We are not limited to the roles and regulations preordained by society.

Sridevi was the emblem of the misfits. She incorporated our struggles, our dysphoria into her characters. And with her, all the queer kids transcended the insular stereotypes we were pigeonholed into. She might be gone, but the universe she opened for us remains.

Coming back to the first line of this article, the die-hard fan in you has probably been itching to report this inaccuracy. Well, too bad, it was intentional. The lyrics of “Hawa Hawai” don’t go Bijli ki rani, main hoon aayi as I thought when I first heard it. It sounds so much cooler when you’re a child, though: Queen of electricity! But the original lyric is far more meaningful when you listen to it as an adult.

Bijli girane main hoon aayi. I have come to rain lightning down on you. I am Hawa Hawai, the gold-crowned destroyer of evil and protector of the meek. I am Sridevi.