Going by how quick the film’s makers are at identifying millennial dating trends, rest assured, we can expect a primer on polyamory by 2056 starring Kartik Aaryan’s grandson. 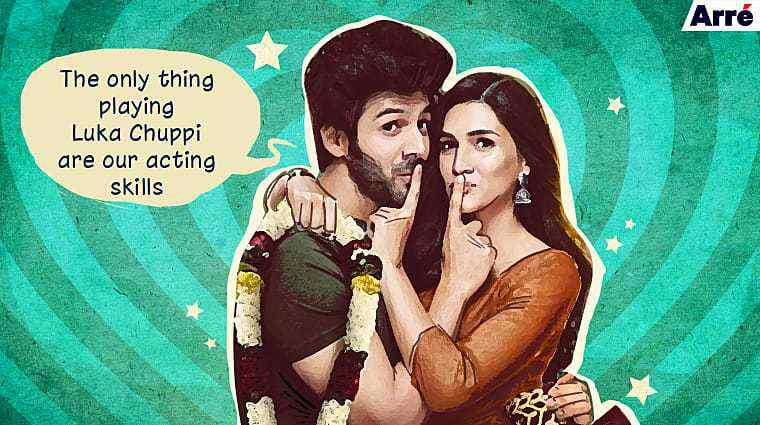 For starters, Luka Chuppi has the restraint of a Taher Shah video. But I assume even Taher Shah spends more than five minutes thinking about what he is setting out to do. The film’s background score has as much subtlety as a Ganpati procession in Worli. And even a random emoji ends up conveying much more than what Luka Chuppimanages to say about live-in relationships in two hours, replete with cringeworthy humour on Muslims, women, and AIDS. Going by how up-to-date the film’s makers are with millennial dating trends, rest assured, we can expect a primer on polyamory by 2056 starring Kartik Aaryan’s grandson. Essentially, Luka Chuppi is the film equivalent of an unimaginative meme made by a dudebro who is convinced that it’ll break the internet when in reality it doesn’t even warrant a pity share.

The film begins when listicle reporter Guddu Sharma (Kartik Aaryan) who works at a local TV channel in Mathura, meets Rashmi Trivedi (Kriti Sanon), the daughter of a right-wing politician. Within minutes, they’re sent out on an assignment that involves taking bytes from random citizens about their opinions on live-in-relationships. Obviously, they start falling for each other over the course of the assignment. Their love story deserves its own Taj Mahal: Guddu falls in love with her because of the way she touches her hair and stares out of the window, and Rashmi falls in love with him because he boasts about not using a deodorant and holds a missing goat in his arms on national television.

Kartik Aaryan and Kriti Sanon star in a totally unnecessary film that shouldn’t have been made..

Then, after a few days of dating, Guddu has a nightmare that his kid nephew will get married before him and decides to immediately propose to Rashmi. In a rare display of logic, Rashmi tells him that they can’t get married without knowing each other better. She has an even better proposal: “Hum live-in karte hai.” Guddu’s token Muslim friend, Abbas (a sleepwalking Aparshakti Khurrana) suggests that they enter a live-in relationship in Gwalior so that both their families don’t object to it. They readily agree, reach Gwalior, find a broker, and then convince him to rent out a fully furnished house to an unmarried couple faster than it takes someone to swipe right on Tinder.

In case you find yourself wondering whether Guddu and Rashmi actually have a reason to be together, the makers allay your doubts by having them lip-sync to two love songs that look exactly the same. Basically, in the 20 days that they live-in, they have sex, make Maggi a total of one time, have two cups of chai each, play catch inside their one-room apartment, and lie down on a road at night only to realise that they now know each other completely and should get married. In compariosn, even Priyanka Chopra and Nick Jonas took two months to bring up the M-word.

Going by how quick the film’s makers are at identifying millennial dating trends, rest assured, we can expect a primer on polyamory by 2056 starring Kartik Aaryan’s grandson.

If this doesn’t sound ridiculous enough, Luka Chuppi’s twists involve a case of a mistaken assumption of marriage and three unsuccessful and unfunny attempts at getting married. There’s also a running gag about Guddu’s unmarried elder brother that is too pointless to even dissect, and one that has Guddu’s family assuming that he is trying to marry other girls while being married to Rashmi. But by then, it’s too late to wonder about the point of literally anything in this film, given that everyone in Luka Chuppi overacts like their goal in life is to force the Oscars to introduce an award for the “Best Worst Hamming”.

For instance, Kartik Aaryan doesn’t discriminate between the romantic, dramatic, or confrontational scenes, and uses the same Pyaar Ka Punchnama expression in all of them. For the uninitiated, that expression comprises him clenching his teeth, raising his eyebrows, and dilating his pupils as if as he’s about to blurt out a monologue titled “Girlfriends suck. Boys are the best”. Giving him able competition is Kriti Sanon, repeating her coy girl act, alternating between smiling and pursing her lips, with such confidence that I suspect no one has informed her about Raabta flopping yet. Pankaj Tripathi is unfortunately also in the film, and like Khurrana, seems to be in no mood to do the heavy lifting to help yet another mediocre movie reach the 100-crore finish line like last year – and they’re the best bits about Luka Chuppi.