Our parents were born at a time when finding your path or chasing your dream wasn’t particularly on the priority list. 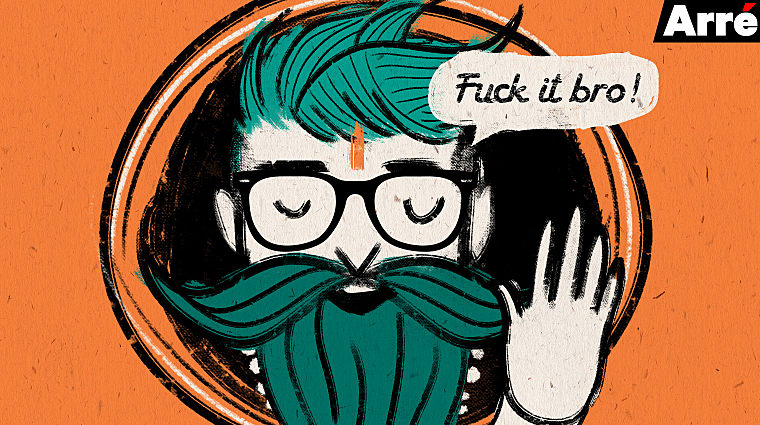 The last time I thought I wanted to be like my father was when I saw the respect he received at his workplace. Suddenly, every part of me wanted to end up in a suit working for a higher-up, thinking about sales, products, a variety of brands, and earn some respect. Little did I know, that that same naïve 13-year-old, would grow to hate everything about that life exactly eight years later.

Here I am, at 21, ungrateful, selfish, and full of profound knowledge about the world being full of shit. And I am not alone. Out there, on the humid streets of Mumbai and inside clubs, drinking, smoking, failing, lies a wasteland of people, trying to find themselves in the mouths of strangers, bottomless glasses of alcohol, and developing a rebellious persona of living in the moment. We’re hatefully termed “millennials”. And we own it.

This indecisive lot gets by with their “Chill out man” and “Fuck it bro” attitudes. We have low-paying jobs, most of us anyway, and we range between wanting to be filmmakers, writers, poets, comedians, travellers, dancers, and artists. Nobody wants to be in insurance. We actively choose only those lives that are difficult to attain without pure fucking talent and we have no doubt that we are any less talented than Hemingway or Scorsese.

How did we get there? Once upon a time we used to be that 13-year-old who wanted to go to office in a suit. It took all of our teenage years to break from the linear thinking of the world and the dreams of our parents. The world came later, only after each parent had been convinced or rebelled against, in more than one way.

Our parents were born at a time when finding your path or chasing your dream wasn’t particularly on the priority list. The important thing was to get a job, buy a house, and survive until you had to retire. It was profoundly simple. There was no existential angst because there was simply no time for it.

We all grew up in these households of hardworking fathers and thread-worn mothers. They got up every morning like clockwork and took on the day with all its mundane tasks and trudged home at night to their small houses and simple meals and got up to do it all over again the next day. We bore witness to their lives, the evaporated dreams they once had, their 20- year-old self that lay imprisoned with the horror of not having even tried to believe in that dream. Somewhere between sprouting our first pimple to driving our first car, we went from respecting them for their choices to deciding that that wouldn’t be the life we would be living. By the time we had our first beer, we wanted something else, something big. We would chase our dreams, as though our lives depended on it.

Our parents were born at a time when finding your path or chasing your dream wasn’t particularly on the priority list.

And thus we set off on a wayward path to redemption. There we were, under the same roof, studying, bunking classes, chasing the dream, job-hopping, drinking beer, lots of it, and occasionally indulging in recreational drugs with the hope of having a fit of inspiration. All of this, just to “find ourselves” at the right time, so we don’t end up as photocopies of our dear parents.

Thankfully, most of our parents could afford to let us chase our dreams. All those years of trudging to work and sleeping without dreams had resulted in this – our freedom. And so we got to be free in all the ways our parents couldn’t be. We got the licence to not care about how much money we made, about what our elders or the rest of the fucking world had to say about us. We had to believe in the universe, in karma, in the power of giving, and believing in how third time’s the charm. We had to live in our own world, to embrace the fresh new hell that had been waiting for us.

And fresh hell it was. Some of us had to go through severe periods of distress from wanting to become something only great people had become, while others… well, they were drowning in a pool of hashtags, moods, and feels, only to be distracted one night at a time.

Together, a generation of assholes in the making, by-products of a lifestyle obsession, caught in a perpetual downward spiral, only to become our unfulfilled selves at the end of it.

My father, in his suited job, is now fulfilled. He speaks lesser about the dream he left behind, I think he still hopes that I don’t have to. I don’t know what to do with that hope. I haven’t found what I’m looking for, but clearly I cannot afford to stop looking. Maybe the coming years won’t be increasingly cold, and we can all get by with flying colours.

Or I can at least hope to be less of an asshole.