Karnataka’s coalition crisis could face a critical floor test: All you need to know

The chief minister has decided to seek a trust vote. Will he survive the floor test? 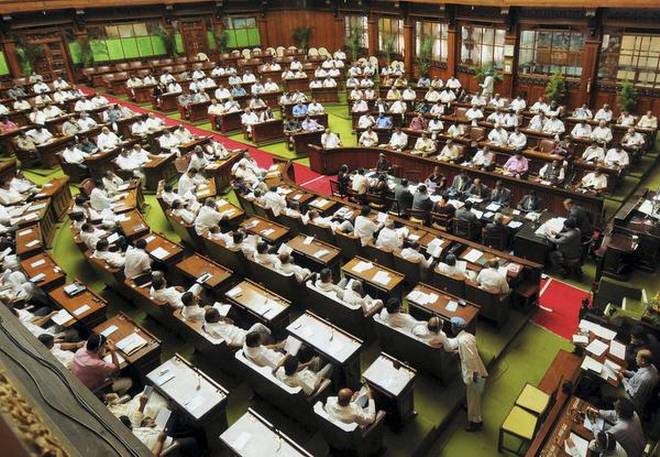 In the wake of Congress and JD(S) MLAs announcing they would resign from the ruling coalition government, Karnataka Chief Minister HD Kumaraswamy​ has decided to seek a trust vote.

They reportedly moved from a hotel in Mumbai to an unknown location on Monday, as their parties tried to desperately to get in touch with them. Promising the rebels a complete reshuffle, the old cabinet has also resigned to woo the defectors back into the fold.

Assembly Speaker KR Ramesh​ Kumar Friday said a slot would be allotted whenever the Karnataka Chief Minister opted for it.

“The chief minister has spoken his mind that he would not cling to power amid the confusion. He said he will seek the trust of the House,” the Speaker told reporters in Bengaluru.

Workers of both parties are protesting BJP’s politics of poaching to beleaguer the coalition. UPA chairperson Sonia Gandhi on Monday directed senior Congress leaders and the state’s lawmakers to resolve the crisis in the earliest.

Joseph told a bench headed by CJI Ranjan Gogoi that the resignations by the rebel MLAs had the same effect as defecting. He argued that they were being “bought or persuaded to resign by payment of enormous sums of money”.

The apex court will hear the rebel MLAs’ petition for the speaker to accept their resignations on Friday, July 16.

Until then, the apex court has ordered a status quo which means their resignation proceedings remain in limbo; the coalition’s disqualification plea has to be taken up before the issue of resignations is resolved.

The coalition did receive a breather on Tuesday after Kumar denied the first bunch of resignations, on grounds that due process had not been following in filing them. He asked the rebel MLAs to re-submit them again.

Opposition leaders have also urged him to invoke the provisions of the anti-defection law under Section 164 and its sub-clauses, in order to save the government.

How’s the govt handling the crisis?

All coalition ministers have since quit to make room for the dissident lawmakers as the Congress and JDS went out of their way to try and win them back.

21 lawmakers from Congress and 9 from JD(S) submitted their resignations to CM Kumaraswamy on Tuesday, in an effort to save the coalition government.

But on Tuesday, a dozen more coalition leaders absented themselves from a meeting despite compulsory attendance, further exacerbating fears.

Congress leader DK Shivakumar accused the BJP and its Karnataka chief BS Yeddyurappa of engineering the resignations and then ferrying the lawmakers to Mumbai on special flights. He is reportedly meeting the rebel MLAs in Mumbai tomorrow, News18 reported late Tuesday.

To prevent more exits, the JDS has put up its remaining lawmakers to a resort on the outskirts of Bengaluru. Sources said the party has also booked 35 rooms in Paddington Resort in Kodagu.

Accusing the BJP of horsetrading and destabilising the coalition in the state, Congress workers staged protests across the capital; the party’s youth workers also gheraoed the Sofitel in Mumbai where the dissident coalition lawmakers were lodged at one point.

In the backdrop of the crisis, Congress leaders including Rahul Gandhi, Digvijaya Singh and former Karnataka CM Siddaramaiah, on Friday claimed the ruling BJP had made so much money during demonetisation that it was now “buying” MLAs.

Meanwhile, the BJP’s Karnataka unit is also demonstrating in districts outside Bengaluru, claiming the Congress-JD(S) alliance has lost their moral authority to govern.

“HD Kumaraswamy must resign as Karnataka Chief Minister. We are going to protest tomorrow at Gandhi Statue, Vidhana Soudha,” Yeddyurappa told reporters on Tuesday. Senior advocate Mukul Rohatgi, who appeared for the ten rebel MLAs said that the Karnataka Speaker was acting in a partisan manner.

CM Kumaraswamy had to cut his US trip short to return and manage the fallout. He is accompanied by senior Congress leaders BK Hariprasad and Ghulam Nabi Azad to save the alliance.

Congress and the regional JD(S) arrived at an understanding to share power after the Karnataka Assembly polls last year — in a bid to prevent the BJP, which fell short of the absolute majority but was still the single party with the most votes, from constituting the government.

Cracks in the hastily assembled post-poll partnership were showing even before the 2019 Lok Sabha polls, but chasms in the seat-share arrangement widened during the election campaigns, probably paving the way for a flip in the mandate in BJP’s favour on May 23.

But the ongoing spate of resignations began with the resignations of two independent lawmakers H Nagesh and R Shankar last week, who were recently appointed as ministers in an attempt to consolidate numbers. But the due reportedly pledged support to the BJP soon after, inspiring eleven others to quit the alliance with more to possibly follow.

If the resignations stand the Speaker’s scrutiny, the Congress-JDS coalition’s 118 members in the 224-seat state assembly will come down to 102 and the majority mark will drop from 113 to 105.

The BJP has 105 members and with the support of the two Independents, their tally now stands at 107.

A similar scenario is unfolding in West Bengal where Trinamool MLAs and councillors are exiting the regional party in hordes to join the BJP, which outdid itself and garnered 19 of the 42 seats in the eastern state in the recent Lok Sabha elections.