Karnataka election 2018: Kumaraswamy to be sworn in as CM, in talks with Congress on portfolio allocation 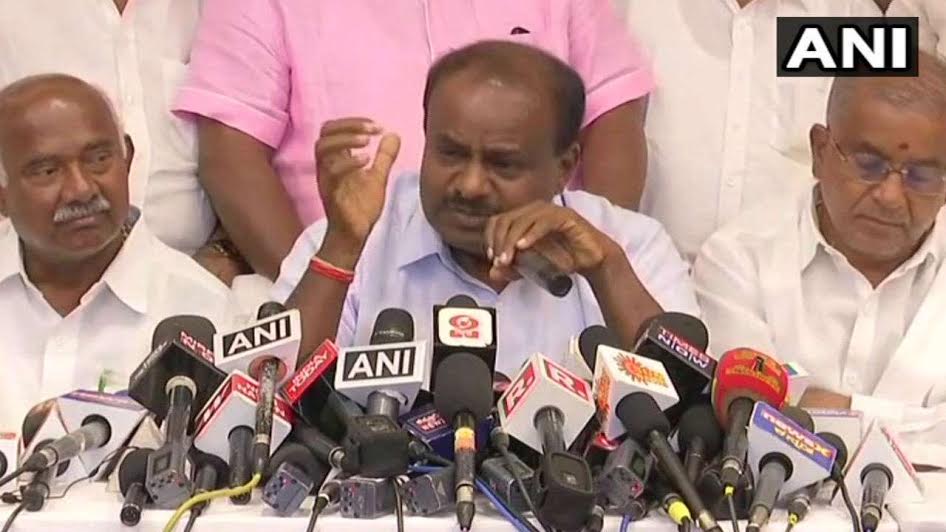 Congress-JDS leaders on Tuesday met and discussed Karnataka’s portfolio allocation and likely expansion, after HD Kumaraswamy returned to the southern state after a day-long visit from Delhi. The Chief Minister designate paid a courtesy visit to Congress leaders Sonia Gandhi and Rahul Gandhi to invite them for the swearing in ceremony in Bengaluru  and to discuss government formation.

Here’s what we know so far

22 out of the 34 existing ministries will be going to members of the Congress Party, the remaining to JD(S), based on their respective legislative strengths. Kumaraswamy has appointed Congress’ KR Ramesh Kumar as the speaker of Karnataka’s Vidhana Soudha on Tuesday. The state may also get its first Dalit Deputy CM as Congress’ G Parameshwara is being championed as the frontrunner for the position. Both the speaker and deputy speaker will be elected on 25 May, according to Kumaraswamy.

Most of the attendees at the oath taking ceremony are expected to be non-BJP leaders with a number of regional party supremos. Besides eminent members of the All India Congress Ghulam Nabi Aazad and Ashok Gehlot and KC Venugopal, Mayawati, Mamata Banerjee, Akhilesh Yadav, Chandrababu Naidu, DMK Stalin and Sitaram Yechury will also be present to celebrate the regional victory.

A senior leader of the CPI(M) said at a politburo meeting on Monday, “At our party Congress, we had adopted the political line of uniting all secular forces to defeat the BJP. There is no problem in Yechury sharing the stage with (leaders of) all secular forces, including the Congress.” Yechury, who has been personally invited by Kumaraswamy, is expected to attend the oath-taking ceremony in Bengaluru on Wednesday, along with Kerala Chief Minister Pinarayi Vijayan of the CPM-led LDF.

The future of the combine

Both Rahul Gandhi and Kumaraswamy on Monday alluded to the “history of acrimony” between Congress and JD(S) but agreed to forget the past and look to the future, which rests on a prudential cabinet allocation in Karnataka. Congress sources said the party’s entire focus was on Kumaraswamy’s oath, election of the speaker and the confidence motion, given the backdrop of this hastily cobbled alliance. Although the specifics have not yet been worked out, the broader terms of the power-sharing agreement are in place and both leaders assured the media that there were no differences on that front yet.

Whether the two allies now jostle over key ministries like home, revenue, power and finance remains to be seen as the Congress is keen to keep those ministries. Former Chief Minister, Siddaramaiah will continue as the Congress Legislature Party leader as the face of the grand old party in the upcoming Lok Sabha polls in 2019. In addition, Congress will contest both the uncontested seats in Bengaluru. Congress and JD(S) will also set up a committee to develop and coordinate a “common minimum programme” for governance.

However, the developments of Tuesday were not without theatrics with the BJP attempting to raise objections upon the discovery of abandoned boxes used to carry Voter-Verifiable Paper Audit Trail (VVPAT machines) condemning “grave irregularities” in the conduct of the polls where they failed to secure absolute majority by a narrow margin. Additionally, Congress MLA Shivaram Hebbar called at least one of the audio tapes submitted as evidence of BJP’s attempt to poach leaders as “fake”.