The jury on the threat represented by Giorgia Meloni coming to power is still out. 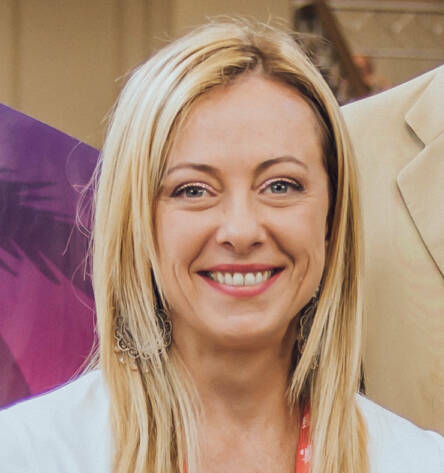 When Italy last held an election in 2018, the Fratelli d’Italia – Brothers of Italy – were minnows, taking a mere 4.4% of the vote. Now, ahead of the 2022 vote on September 25, opinion polls suggest the far-right group is on course for a historic victory that would make them the largest party in Italy.

If this comes to pass, the Brothers of Italy would enter government at the head of a three-party coalition (already agreed with Matteo Salvini’s the League and Silvio Berlusconi’s Forza Italia). Party leader Giorgia Meloni would be prime minister.

This is significant because Brothers of Italy’s historic lineage traces back to the neo-fascists of the post-war period. Indeed, its very symbol (a tricoloured flame) is the same as that of its predecessor, the National Alliance, and of its predecessor, the Italian Social Movement – which was founded by veterans of Mussolini’s Italian Social Republic.

The result of this election is already considered a foregone conclusion. That is not just because the margin of difference in polling is so great, but also because the parties of the centre and left have failed to construct a pre-electoral coalition.

In Italy, this is a form of political suicide. The electoral system – part majoritarian and part proportional – favours those parties which make pre-electoral pacts and form large coalitions. Yet, the Democrats rejected a pact with the Five Star Movement because of its role in bringing down the government of Mario Draghi.

The centrist “third pole” created by two smaller parties then rejected the Democrats because they were flirting with the Green Left. This fragmentation means not just that the right-wing coalition is unsurpassable but that it could, with over 40% of the vote, secure more than two-thirds of the seats in the Italian parliament.

A majority of that size would enable the government to amend the constitution and introduce a directly elected presidency – an idea on which all three parties in the coalition seem to agree. When a politician of the far right like Meloni speaks of replacing parliamentary democracy with a “democracy of the people”, it sends a shiver down the spines of many Italians.

Fears of a return to the fascism of the past may nevertheless be overstated. A detailed look at any policy area (European integration, migration, the energy crisis, Ukraine) reveals significant differences between the three parties of the right. It is not at all clear that they are capable of producing coherent government, let alone see through on a radical constitutional overhaul.

The positions adopted by the Brothers of Italy also often seem incompatible, if not contradictory with each other. This is because Meloni is speaking to two audiences. One needs reassuring that she will not be too extreme if elected. The other comprises party members, militants and sympathisers who need to hear about ideologically motivated changes to come, and who are more interested in the tone and big picture than the details.

Meloni’s position on Europe is another cause for concern. Although she declares herself to be committed to the EU, she also wants to review various financial arrangements with the bloc. And the other parties in her coalition are well known for their eurosceptism. Their programme (“For Italy”) says it wants a more political and less bureaucratic EU, and there is concern as to what this might mean.

A Meloni-led government also brings potential ramifications for the sanctions on Russia and the arming of Ukraine. Both Europe and Moscow are wondering if the election outcome might see a change in the Italian government’s position that undermines Europe’s united front. For all Meloni’s apparent commitment to the European position, Salvini and Berlusconi are sceptics, if not outright opponents.

The American National Security Council recently revealed evidence that Russia secretly channels funds to a large network of (as yet unnamed) parties (including Italian ones), in order to disrupt democratic processes and garner support for Moscow. This has fuelled suspicions that the parties of the right may all be involved.

Meanwhile, Italy finds itself in a significantly deteriorating economic scenario and is especially exposed to the Russian gas crisis. The IMF has estimated that an embargo on Russian gas would see an economic contraction in Italy of over 5% – higher than all other EU nations but Hungary, Slovakia and Czechia.

The country will also be affected by the European Central Bank’s decision to scale back its stimulus programme by raising interest rates and stopping the purchase of national bonds. Small wonder that investors have been selling off Italian bonds and hedge fund investors have been betting against them on a mammoth scale. The markets, in short, are worried, although they are, as it were, building in expectations of a right-wing victory, which may therefore offset a dramatic post-election fall.

It should be noted that Italy has been in a similar political position before. There were widespread fears ahead of the 2018 general election about what would happen if the populists came to power – and, sure enough, they did. The Five Star Movement, with an extraordinary 32.7% of the vote, formed a government with Salvini’s League. Yet, the government proved to be hopelessly divided (some would say incompetent) and collapsed a year later. On today’s opinion polling evidence, Five Star is now a relatively minor political force.

True, what makes 2022 different is that this will be the first time the heirs of neo-fascism have come to power. But it should not be forgotten that Italy’s political system is difficult to monopolise, and even more difficult to reform. In short, the jury on the threat represented by Meloni is still out.