Is an information war brewing in Venezuela? Full details

An early demise of the first phase of a US-attempted coup in Venezuela seems imminent, contrary to what Opposition leader Juan Guaidó and western media may claim. 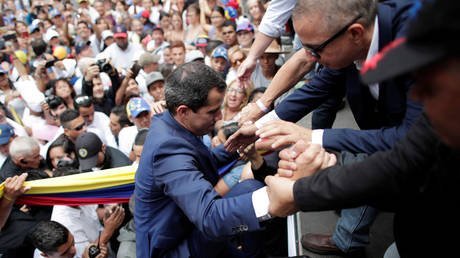 An early demise of the first phase of a US-attempted coup in Venezuela seems imminent, contrary to what Opposition leader Juan Guaidó and western media may claim.

Guaidó and his three-month-old push to oust Maduro suffered its biggest setback on Tuesday, April 30, when he called on the army to overthrow president Nicolás Maduro, which fell on deaf ears.

The Opposition’s efforts to rally Venezuelans against Maduro since January culminated in planned nationwide anti-government demonstrations on Wednesday, May 1. However, international observers doubted Guaido’s ability to pull this off without military might, which is still on Maduro’s side.

Much like his January announcement that he was taking the reins of government, Guaido announced earlier this week that the “final phase” of the efforts to end Maduro’s disastrous rule had begun; he was seen along with political prisoner, Leopoldo Lopez, one of Venezuela’s most popular opposition leaders.

“This is the morning for all us to go out to the streets, civilians and soldiers,” Lopez, who had been placed on house arrest since 2015, said as he stood with Guaido near a military airbase in eastern Caracas on Tuesday. Lopez has since sought refuge at the Spanish embassy, according to latest reports.

This week’s protests witnessed the power of the military, without which Guaido’s alleged presidency will forever be an act of pure symbolism.

BBC and CNN were taken off the air by the Venezuelan government on Tuesday, moments after the network broadcast a feed that showed military vehicles running over protesters in Caracas.

In dozens of other cities, government troops violently quelled the resistance, national police and guardsmen flung tear gas at protestors, deployed armoured vehicles to block main urban arteries, while hundreds of supporters of Maduro rallied outside Miraflores, the presidential palace, in a show of strength.

Within ten hours, the streets of the capital were quiet, long empty of the protesters who had responded to Guaido’s call, to join what he called, Operation Liberty.

US Secretary of State Mike Pompeo claimed on CNN that Maduro was all but going to Havana on Tuesday, but the Russians talked him out of abdication: a claim that Moscow denies.

Trump’s National Security Advisor, John Bolton reported that key members of Maduro’s regime and the Venezuelan military, in particular, were ready to flip. In a contradictory tweet, he threatened Venezuela’s defense minister and chief justice, saying this was their last chance to accept Guaido as the legitimate president and escape sanctions or “go down with the ship.”

Florida Republican, Marco Rubio, who has shaped much of US’ Venezuela policy of late, claimed that high-ranking officials who publicly support Maduro had “been working to get him out.”

Emboldened by the promise of diplomatic and military support from the Trump administration, which with its sanctions has single-handedly brought the Latin American country to its humanitarian crisis over the last couple of years, Guaidó’s gambit was risky and it failed.

An information war to mask a coup d’etat? That’s a first.

Journalist Anya Parampil in a television interview on May 1 challenged the misrepresentation of the ongoing coup by most media outlets, saying the Opposition neither has the popular support nor the military strength as Guaidó claims.

Parampil heavily doubts that the ongoing people’s revolt will dethrone Maduro, especially with Maduro’s iron grip on the army and Guaidó proving time and again that his government can only come to power on the back of a US tank.

What happened in January?

This comes three months after Guaido declared himself the interim president of Venezuela, to the point that several American countries recognised and lent legitimacy to his claims, fuelling concerns of an orchestrated coup.

The level of US intervention in Venezuela’s internal crisis has called Washington’s real motives in the oil-rich nation into question.

Latin American political experts also noted the alarming “scale of the popular mobilisation” amidst the country’s humanitarian crisis, and the “degree of international coordination that evidently went into timing Guaidó’s move followed by international recognition.”

But the Chavistas and the army have remained steadfastly loyal to Maduro, the chosen successor of the late Hugo Chávez, whose ideology of Chavismo polarises Venezuela till date.

Maduro was re-elected in a widely discredited presidential election last year and has since repressed all forms of dissent, while the nation descends further into crisis.

The Opposition, which won the legislative elections in 2015, maintains a majority within the internationally recognised, but domestically-isolated National Assembly; it rejected the May election results and appointed Guaidó as its leader in January.

Nearly 90% of Venezuelans live in poverty with a minimum wage of $1 a month, while imports are down 50% causing food and medicine shortage. The Venezuelan Bolivar has already lost 99% of its value, and GDP has been slashed by half over the past two years.

Amidst this crisis, crime rates have surged, resulting in almost 27,000 violent deaths in 2017 and the second highest murder rate in the world. Around 10% of Venezuela’s population has fled the country since 2015, according to the UN.

According to The Guardian, the Trump administration imposed numerous sanctions on Venezuelan businesses and those close to Maduro in recent months causing the country’s humanitarian and economic crises to worsen. The Centre for Economic and Policy Research released a report last week claiming that US sanctions have led to the deaths of 40,000 Venezuelans since 2015 and will affect thousands more.

With Maduro refusing to step down, Venezuela’s consular and trade relations with many nations are deteriorating, leading to fears of a complete oil embargo which would destroy what’s left of the country’s economy.

Qrius had reported in January that oil export earnings are being used to satiate the high-ranking military members to keep the army from participating in the coup.

That said, history has seen Venezuela through another coup which too involved thousands of protesters on the streets, a self-proclaimed president and an uncertain political future.

In 2002, dissident military officers with the support of the private media, opposition politicians and the Metropolitan Police—propped-up by the US, as some claim—removed Chávez from office, but was forced to reinstate him as president for fear of a civil war.

But unlike Maduro, Chávez enjoyed the support of the Venezuelan populace, especially the poor. Ever since global oil prices plummeted in 2014, bringing Venezuela’s oil-dependent economy to its knees, Maduro’s approval ratings have steadily dropped.

Marches against Maduro have vastly outnumbered those in support of him. At least 124 people were killed during Venezuela’s 2017 protests. Another 4,000 were injured and 5,000 were arrested, according to the Inter-American Human Rights Council.

That said, protests against Maduro must not be construed as support for the opposition. Guaidó’s bloc has not put forward a coherent plan yet, except one where they overthrow Maduro.

The 35-year-old Guaidó is a member of the Popular Will, “a centrist social-democratic political party, and a former student leader from the same political party as Lopez. He claims he has no desire to remain president for longer than it would take to hold re-elections and distribute humanitarian aid.

But on whose terms and to what end, especially in view of Venezuela’s socialist history and economic crisis?

With Guaido recently admitting needing more military support from the US, there is no longer any doubt that Marco Rubio’s foreign policies are steadily leading the US into a dangerous standoff in Venezuela. Trump himself has been very vocal and eager about sending military help to resolve the Venezuelan crisis.

The Lima Group formed with the purpose of establishing a peaceful end to the Venezuelan crisis has also thrown its heft behind Guaidó, along with the EU, France, Spain and others. Meanwhile, countries such as China, Russia, North Korea, Cuba, Turkey, India and the Phillippines continue to extend their solidarity to Maduro’s government.

It is of paramount importance that Venezuela’s historic moment of reclaiming power does not turn into a civil war or is allowed to be hijacked by external forces, like the 2002 coup supported by the George W Bush administration.

Even a quick military intervention by the US must be resisted, especially in the face of Venezuela’s weakened bureaucracy, as history has proven that American nation-rebuilding projects on foreign soil often lead to an extended stay and greater internal resistance.

What’s next for Venezuela?

Dimitris Pantoulas, a political analyst, says, “The opposition called for a civic-military uprising but failed on both ends. Parties didn’t manage to rally and coordinate enough protesters nor did they convince a significant enough factions of the military to break ranks.”

Guaido and his advisors believed that by declaring an uprising they might actually be able to create one. Now, Maduro has vows to prosecute those behind dramatic attempt to remove him saying, “They can’t go unpunished.”

As Guaido is in hiding and dozens of his supporters injured in the protests, Maduro may use the momentum to jail the leader of the Opposition once and for all, in which case, the US will have the incentive to send its troops storming into Miraflores.

With supporters of the Opposition determined to carry Operation Liberty forward and the army playing a wild card, a quick turnaround cannot be ruled out in the coming days. Whether or not Maduro’s victory turns out to be shortlived, a diplomatic solution that does not devolve into a civil or proxy war is in Venezuela’s best interests.