Art, poverty, and metaphors: In conversation with Kota Neelima

In a conversation with the artist, she revealed several dimensions of her thought process and the source behind her creative expression. 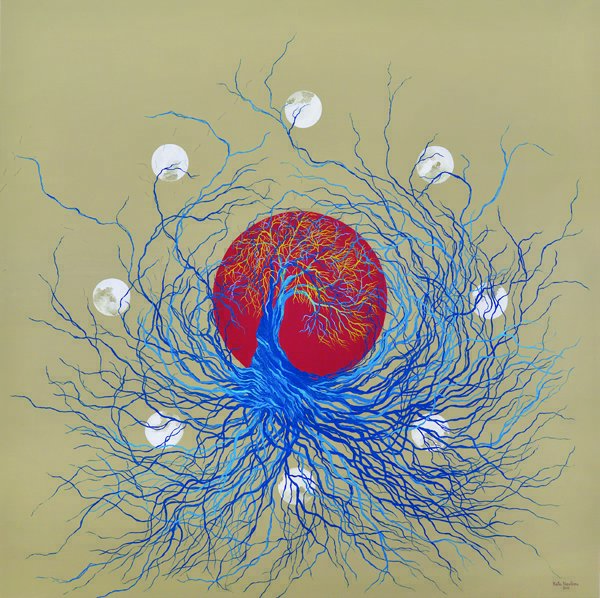 The title painting of Kota Neelima's recent exhibition, 'Metaphors of the Moon'.

From women’s rights to victims of farm distress, as an author, columnist and activist, Kota Neelima has thrown light upon the struggles of rural India. In the past twelve years, she has published seven books and written numerous articles for the likes of The Huffington Post and DNA India. Her book ‘Shoes of the Dead’ is being adapted into an upcoming movie by the National Award-winning filmmaker, Vetrimaaran. That’s not all – art is yet another medium of expression that is dear to Kota.

Kota has held seven solo exhibitions in New Delhi, while her work has been featured in several group shows in India and abroad. Her recent exhibition, ‘Metaphors of the Moon’ was held in Lalit Kala Akademi, New Delhi, between 11th and 17th May.

In a conversation with the artist, she revealed to us several dimensions of her thought process and the source behind her creative expression.

Have you used art as a medium to express your emotions throughout your life? When was the first time you realised you could do so?

The awareness of thought brings about the need for expression of thought. Conversely, the expression of thought brings about its awareness. I think, therefore, I paint and write; I express, therefore, I think. Human beings are inherently very creative and find ways of demonstrating it. For instance, all children are expressive through art or other forms. Formal education seeks to channel that creativity into productive structures, so that it can be utilized to fulfill collective purposes. The natural creativity of a human being is either chosen or discarded based on its usefulness rather than its uniqueness, thereby limiting art to individual expression, and preventing it from becoming a collective achievement. My childhood was no different, except that I had a very supportive family that encouraged me to pursue creativity that the schools did not promote.

Can you tell us a little about ‘Metaphors on the Moon’ and your inspiration behind the series and its title?

“The 2018 series of my paintings, ‘Metaphors of the Moon’, is based on the concept of reconciliation. It is part of my ongoing exploration of skepticism and doubt in Indian philosophical thought. In all my works, I employ the symbols of nature to articulate the questions that are found in Upanishads. In the present series, the ‘metaphor of the moon’ in reference is the mind, which goes through phases of creation, immersion and regeneration, just like the Moon. The material world is represented in the tree and the sky is the playground of the possible”.

Given that your inspiration often comes from issues deep-rooted in India, are you still able to connect well with your international audience?

The issues of humanity are essentially common across the world. The questions that I deal with, like poverty and human distress, are being asked in every country today. The dissimilarity may be in the way countries respond to the needs of their citizens, and how governments work towards making their lives better. There can be no single solution to poverty, but the problem itself is universal. In the context of art, the visuals transport the anguish of humanity across borders and languages. Art is the truest medium of thought.

You have presented your work across the world, in China, India, Belgium. These countries being vastly diverse, do they often introduce you to different perspectives of viewing the same creation?

Good question. Every nation is different culturally, socially, politically and historically. Yet, it is human thought that unites the world. As I paint about issues of human suffering and reconciliation, I have found a similar resonance to my work across the world. The nature of the human condition is the same: whatever may be the country or its specific circumstances. Art transcends the difference between civilisations and nations, and overcomes the natural and man-made barriers.

Can you talk about any painting from your recent exhibition and the process of creating it?

Every painting I make is of great importance to me. That is the reason why I do not produce artworks in large numbers. The creative process has several steps. First, I begin by reading and researching the subject, which in the 2018 series was about rural poverty and reconciliation, especially about farmer suicides. The second step is to write the concept for each painting; I also display this concept along with the painting at the time of exhibiting the artwork. The third step is to sketch the visual through which I want to represent the theme. Finally, I begin painting. I have never timed the entire process and each painting demands its own research and conditions for actualisation.

In the present series, the title painting, ‘Metaphors of the Moon’ (size 4 feet x 4 feet) took the longest time to make and required extensive experimentation with the concept and its implementation.

With an audience around the world, do you sell your work in India or internationally?

Both. As my work is available on my website www.kotaneelima.com, the paintings can be accessed across the country in India and also the world.

After Delhi, what’s the next stop for ‘Metaphors of the Moon’?

The show will travel to London next. I look forward to learning from the opinion of the viewers there.

On The Ellen Show,Portia De Rossi mentioned her latest artistic venture to promote artists and not art. She wanted to help artists generate a higher income from a painting and has started her own website called General Public. Here, she uses 3D Technology to replicate painting with the exact texture and detail as the original. The painting can then be sold more than once to the general public.

Would you ever like to take part in this initiative and replicate your work? Do you think the art would lose its individuality or do you believe it is a great way to honour the hard work it takes to create a painting?

I believe no artwork can be replicated. When I make a painting, I am not only using colour, oil, canvas etc, but I am also capturing the thoughts of the moment in art. Technology may replicate the image, but it cannot reproduce the same circumstances in which that artwork was made. Art cannot be premeditated. It remains pure in its ability to represent a moment. Just as a moment cannot be repeated, the same art cannot be, truly, replicated. Having said that, it is the decision of individual artists on whether they would like their work to be replicated in this way.

Rhea Mathur is a writing analyst at Qrius