Inspired by Prime Minister Narendra Modi’s words during his Independence Day speech, India is striving towards sending a crew of astronauts to space by 2022. 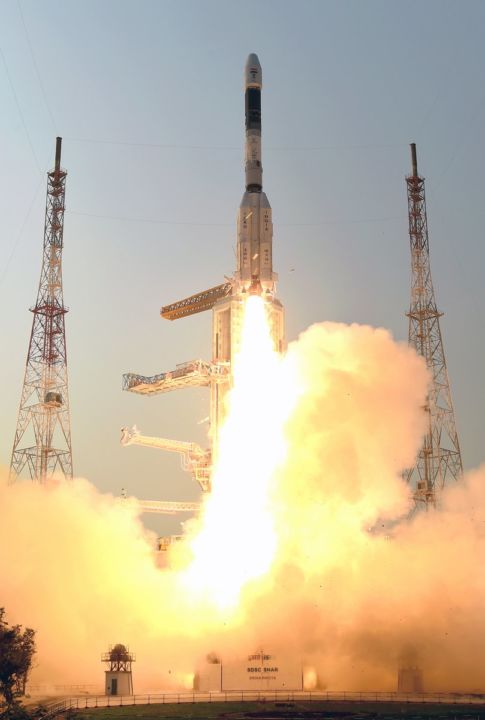 Inspired by Prime Minister Narendra Modi’s words during his Independence Day speech, India is striving towards sending a crew of astronauts to space by 2022. Giving wings to India’s space dream is the country’s space organisation – The Indian Space Research Organisation (ISRO). ISRO plans to go where no nation has ventured before; it plans to land near the moon’s south pole and explore the potential for mining helium-3.

Delivering his address from the ramparts of the Red Fort, Modi said, “I am happy to announce that India has decided that by 2022, when India celebrates its 75th year of Independence, or before, an Indian — could be a boy or a girl — will go to space with the tricolour in their hand,” Hindustan Times reported. He added that India’s space project will be called Gaganyaan.

ISRO chairman K Sivan expressed confidence in meeting the deadline set by the Prime Minister. Sivan said, “We can achieve the 2022 target that the PM has announced. ISRO already has a crew module, the crew escape system was tested this year, and we have a launch vehicle. Not much more is needed as far as the technology is concerned,” as per the Hindustan Times report. Since then, ISRO has been working actively towards making this dream a reality.

ISRO’s plans for the manned mission

ISRO plans to launch three astronauts in space for a duration of seven days, Sivan said while speaking to the press.

“Earlier the Indians would refer to the moon as Chanda Mama, but Isro and its predecessor have ensured we have made a mark in space missions. The spacecraft will be placed in a low earth orbit of 300 to 400 kilometres. The total programme cost is expected to be less than Rs 10,000 crore,” Sivan said, India Today reported.

Emphasising the need to bring the astronauts on board as soon as possible, Sivan said that they will soon begin scouting for pilots.

“We need to select our astronauts at the earliest as they would require at least three years for training. They could be from the air force or Isro (Indian Space Research Organisation), or even a common man. Since it’s our first mission, we would prefer a pilot. The initial training will be done at the Institute for Aerospace Medicine in Bengaluru,” Sivan said while addressing the media on Tuesday. He added that scientists have been working on the project since 2004 and that a prototype of the suit has already been prepared.

To ensure that the mission is a success, ISRO is also developing critical technologies and is preparing a document on the mission. “Critical technologies are being developed for our human space programme as it is India’s dream to put a man in space. A mission document is in the making,” Sivan said, as per an IANS report. ISRO’s maiden unmanned pad abort test was successful, and Sivan said that very complex technology was used in the trial.

ISRO surely has a busy year ahead of them. The space organisation’s “most complex mission” – Chandrayaan-2 – will be launched in January 2019, after some changes were suggested to avoid failure. “It is the most complex mission ISRO has ever taken. To ensure that it becomes a success in the first attempt they (experts) have suggested some changes,” Sivan told PTI.  The suggested changes has resulted in an increase in weight, and the mission will now be launched with assistance from the GLSV Mark III launcher.

Media reports also mentioned that ISRO is planning to launch 22 missions into space by 2019. In addition to that, the organisation plans to launch 50 satellites within the next three years. “We have identified 50 satellites that will be launched over the coming three years,” Sivan said, as per a report in Firstpost. He added that starting February 2019, ISRO is planning two launches every month.

Countries that have launched missions to space

With the launch of Sputnik 1 in 1957, Russia was leading the space race. The Russians worked hard to beat the United States’ plans to send a man in space by 1961. On April 12, 1961, Russian cosmonaut Yuri Gagarin became the first person in space. Vostok 1 transported Gagarin once around the earth at a speed reaching 17,500 mph, with the entire mission lasting 108 minutes.

However, the US was not far behind and sent a man in space in May 1961. Alan Shepard was the first American in space and the second individual in space. Shepard was launched on a suborbital flight called Freedom 7 on May 5, 1961.

On October 15, 2003, China launched its first manned flight into space. The Shenzhou-5 spacecraft carried one astronaut into orbit from Jiuquan in Gansu province in northwestern China. It circled the Earth 14 times before landing in a remote region of Inner Mongolia.