India is the world’s music piracy capital, but that may be about to change Various albums by The Beatles are displayed for sale at Bleeker Bob’s record shop in New York. Credit: Jeremy Bales/Bloomberg

From rock and pop to classical and Bollywood, a dozen homegrown and global platforms like Gaana, Saavn (now merged with Jio Music), Hungama, Airtel Wynk, Apple Music, Google Music and Amazon Prime Music let users access vast catalogues of songs online. Most offer free music, and charge as little as Rs 29, or less than 50 cents, a month for ad-free access. Even Spotify, the No. 1 service in the U.S., plans to join the crowd.

The hope stems from cheaper and faster data driven by the nation’s richest man Mukesh Ambani. His Reliance Jio Infocomm Ltd. unleashed a tariff war in the world’s second-largest telecom market where a third of 1.3-billion Indians now own smartphones. That created a nascent market of users who don’t mind paying. The number of people listening to songs legally online, according to an EY report, is expected to jump threefold to 273 million by 2020.

Yet, getting users to pay will be a challenge. Pirated content continues to be the most popular source of music. Indians visited websites providing unlicensed music 9 billion times in 2017, according data shared by analytics firm MUSO to BloombergQuint. It’s a threefold jump over the previous year as the nation continues to lead the global music piracy chart. Clamping down on websites offering pirated songs has worked only partially. 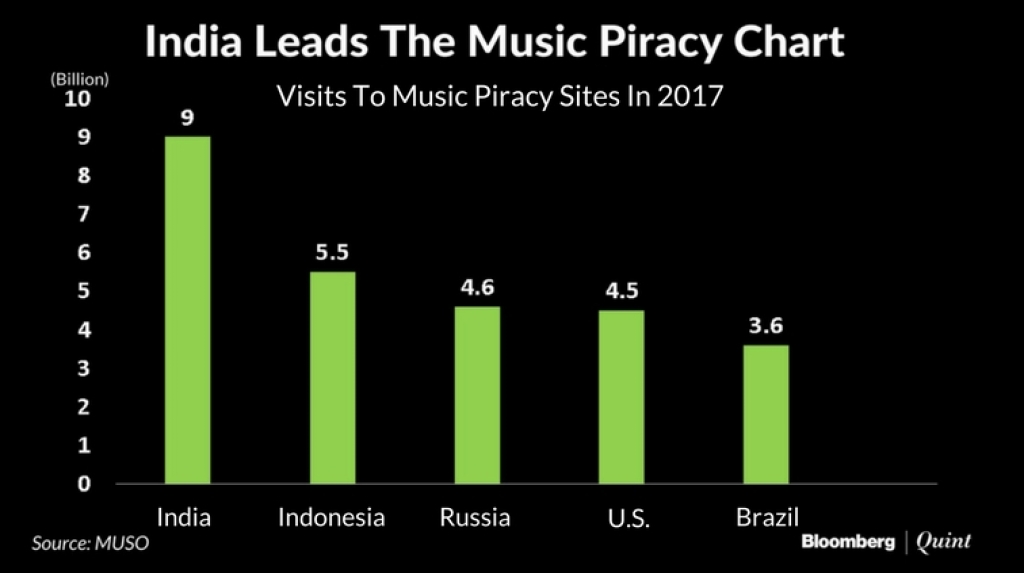 Still, the opportunity is huge and all streaming players are working to build a habit, said Siddhartha Roy, chief executive officer of Hungama. “We believe it’s just phase one playing out where customers are getting comfortable. Habit will eventually lead them from the free to the paid model.”

Streaming apps helped the Rs 1,280-crore ($190 million) music industry struggling to tackle unlicensed use. Just like Spotify did in the U.S. That’s because apps pay music labels and companies a fee for getting access to their archives.

The industry had stagnated and digital platforms have given it a fresh momentum, said Vikram Mehra, managing director at Saregama India, which has one of the largest music archives in India. “Easy availability of content has led to more and more people listening to music legally.

In the last three years, not just in India but globally the entire music industry, including labels, is growing and the credit goes to the streaming world. Vikram Mehra, Managing Director, Saregama 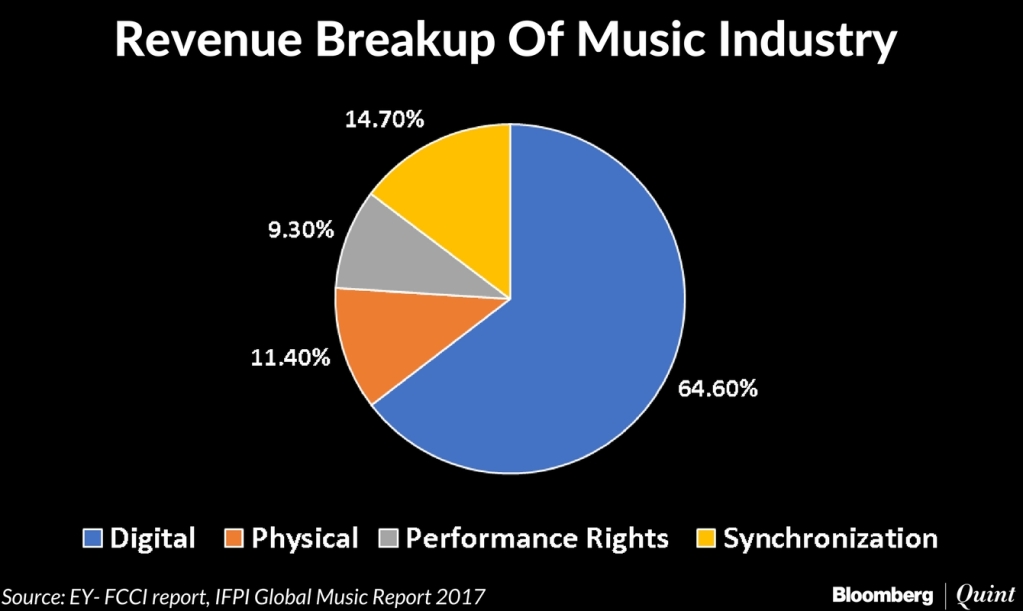 Nine music apps in the country account for a large part of the company’s overall business-to-business sales, Mehra said. And most music labels have shifted to digital distribution. Physical sales contribute just 11 percent of the industry revenue, EY said citing IFPI Global Music data. That compares with the global average of 34 percent. Deloitte had in 2015 estimated the digital music market will touch Rs 3,100 crore (about $470 million) in India by 2020.

Not an easy ride

The number of people listening to music online has more than tripled since 2015. Yet, most tune in as long as it’s free and getting them to buy a monthly subscription has proved difficult. Of roughly 87.6 million users last year, according to EY, only 2 percent paid.

“Monetisation is a challenge,” said Frank D’Souza, partner and leader, entertainment and media, at PwC India. “It’s difficult to get customers to pay for services as they are used to getting content at a very low or no price. Changing this behaviour is challenging.”

At the same time, the content cost is going up with increasing competition. Raghav Anand, head for digital, media and entertainment at EY India, said it will continue to rise till the platforms reach a more mature subscriber base.

That’s why D’souza of PwC expects standalone music streaming businesses to find it harder to get customers to pay compared to players that offer a bundle of services.

Music is better as an adjunct than a standalone offering if you are looking for the long haul. That’s the only way to keep your customers engaged on the platform. Frank D’Souza, Partner, Entertainment And Media, PwC India

This is where the likes of Amazon Prime, Google Music and Apple Music will have an advantage. Even Bharti Airtel Ltd.’s Wynk and Reliance Jio offer more than just songs. And it will be a challenge to stand out in the crowd.

There is enough room for multiple players, Anand said. But if Indian platforms are banking on volumes, it is going to be difficult. “You can get the first 5-10 million customers. But if you want to do the volume subscription play, these players need to step outside India. Something that global OTT players (like Netflix) have done.”

Spotify will only increase competition. The Swedish company, considered the Netflix of the music industry, has grown exponentially by convincing people to listen to recorded music at a reasonable price. What makes it click is its use of data analytics to make suggestions to users.

Yet, it won’t have the first mover advantage in India. “The biggest challenge will be to get the customers to pay and at what price,” D’souza said. “Getting regional content will be another big question.”