I’m a copywriter, teacher, stand-up comic, guitarist, cook. And you?

When did we stop having heroes who were singular in their pursuit. When did we start looking up to the jack of alls and master of nones? 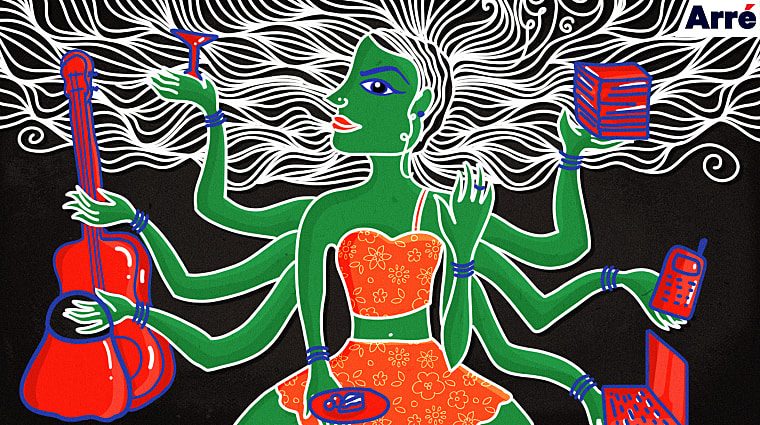 The list of threes in the English language is endless. And though they say three’s a crowd, two words sound incomplete while four are a mouthful. With the passage of time, a group of three words made it to describing what you did for a living, at least in the creative world: “Writer. Producer. Animator.”

In the beginning, the words simply defined the work we did, which was great. Then, the three-word descriptors crept into our hobbies, because those who weren’t doing much wanted in too. So, we saw the rise of the “Banker. Dreamer. Traveller.” That was still tolerable, in light of what followed. Soon the three words became vaguely about who we are. “Dreamer. Believer. Thinker.” Or something of the sort. WTF?!

In no time, it has become fashionable to put everything in three succinct words: Swipe through Tinder and you’ll see many a “Dreamer. Believer. Doer.” There is obviously the “Actor. Writer. Drinker.” Some choose to be a bit more abstract and used three nouns to describe themselves: “Dreams. Philosophies. Rum.” For this lot, I have not three but four words: “Genuinely meaningless. No substance.”

Rarely will you see a plumber say, “Plumber. Dreamer. Doer.” He knows what he does; you know what he does. Expectation and reality match. There is no ambiguity in what’s being offered. But the premium today is on versatility. You’re nobody if you do just one thing. One of my students recently told me, “A watch is so useless; it has only one function.” (My argument that it also shows the date was futile.) It doesn’t cut it if it does one thing.

In times when even your phone doubles up as your camera, your assistant, a map, a pastime, a distraction, a recorder, an addiction, and whatnot, can people get away by doing just one job? You have a day job, you teach in colleges, you know how to grow your herbs, you cook in the afternoons, you have pop-ups on weekends, you slip into a stand-up by early evening, you can tell 14 types of wine by late evening, you dehumidify cigars much later that same evening, you have a podcast by night, you race cars by midnight, and perhaps on really busy days, have a blog going deep into the night too. Multi-tasking is the only thing worth pursuing. You can’t be a single-function watch anymore.

When did we stop having heroes who were singular in their pursuit. When did we start looking up to the jack of alls and master of nones? And why?

While it is great that for the first time in human history it is possible to have 11 careers going on simultaneously, what happened to the idea of subject-matter experts? People who do one thing and do it really well? There is no way someone who does 10 things does all of them just as well as someone who does one thing. Unless you change the definition of doing something well. And that’s what we’ve done.

We’re living in premium mediocre times – a stunning term coined by Venkatesh Rao. Mediocre with just an irrelevant touch of premium, not enough to ruin the delicious, essential mediocrity. And that’s what we’re really in it for. We’re so happy with things being just about OK, that we do not ask for more. And it’s not just in India, it’s a global phenomenon, before you say they are sticklers for quality. Premium mediocre is a nice adaptable idea, it’s impossible to resist.

If premium mediocrity is the produce, versatility is the farm, and multitasking the fertiliser for it. Today you don’t need to be a master of anything to get ahead. Almost no stand-up comic is worth the price they demand, but they still get it. Almost no restaurant actually serves good food – they are all hovering around the average and above-average mark – as long as it looks good on Instagram. If it works, then why bother getting any better at it?

I miss those times and those people who did just one thing and did it well. Is Zakir Hussain also a chef? Did Usain Bolt also do salsa? Does Bill Gates also do stand-up? Is Jerry Seinfeldalso a teacher? What happened to putting endless hours into one vocation, mastering it, and then actually being humble about it, saying you know very little about it? Where is the undying yearning to do one thing and do it as well as you can, as well as nobody else can? Isn’t that the only way to pursue greatness?

When did we stop having heroes who were singular in their pursuit. When did we start looking up to the jack of alls and master of nones? And why? Because it is an escape from the human anthill, perhaps. Life isn’t a rat race anymore, it’s an anthill. It’s still about getting to the top of it.

I think the reason we exist in this multiverse, is because multitaskers give us hope. Never before have there been so many youngsters out there who also have their YouTube channels because they might become the next Biswa or the next big fashion blogger. Having your own channel is today’s equivalent of auditioning for MTV Roadies – a ticket to success.

We’ve taken the whole “put your eggs in different baskets” advice too far. We are too afraid to do only one thing because if that one thing doesn’t work out in the end, all that effort goes down the drain. What’s more important is YOLO. How can you spend an entire life doing just one thing and run the risk of eventually being proved that you weren’t very good at it. How shameful would that be?