How BJP won over “anti-Hindi” Karnataka

BJP’s victory has been despite the language barrier, and it is only going to add to the strongman aura that Narendra Modi and Amit Shah enjoy. 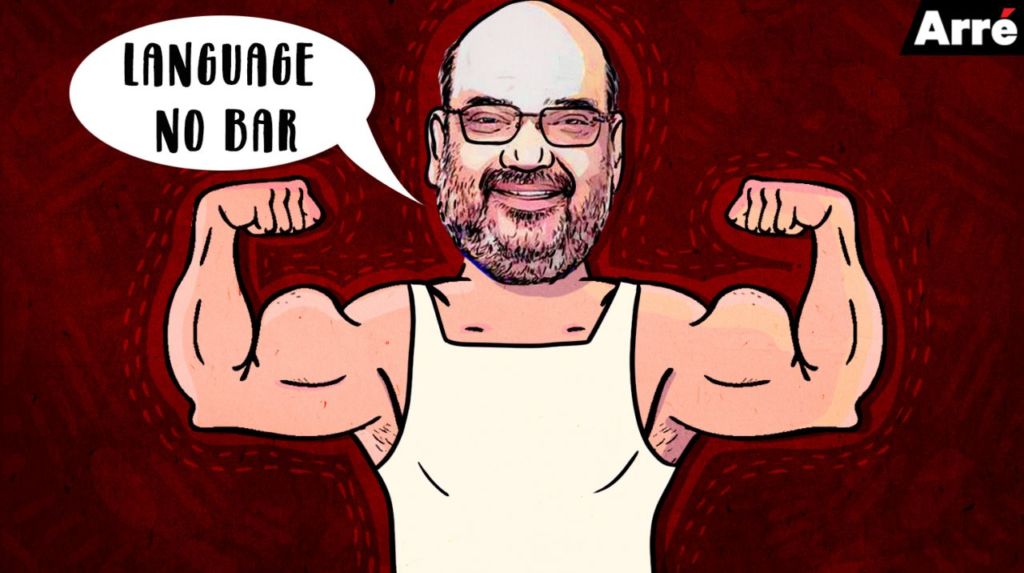 Despite mix-ups and fumbling translators, PM Modi and his right-hand man Amit Shah won over Karnataka using the language the state has campaigned against – Hindi and its imposition. BJP’s victory has been despite the language barrier, and it is only going to add to the strongman aura that Modi and Shah enjoy.

I have always maintained that there’s something instructive about the WWE – and I finally have a chance to explain it in the context of the Karnataka elections.

When the WWE live show came to New Delhi last December, all the fanboys in the city came out in a show of support. In the months prior, the Wrestling federation hyped the event with a series of battles, pegged as the “Road to New Delhi”. During that period, Jinder Mahal was given a championship belt, and billed as the “The Modern Day Maharaja”. This was an attempt to make an international format local, more palatable to Indian audiences, so that the WWE could presumably make a good amount of money off ticket sales in India.

However, when the party arrived in Delhi, Jinder Mahal could have been one of the bodyguards for all the crowd cared. The horde of Indian fans, instead, thronged Triple HHH, a man who had not yet uttered a word of the local language.

A similar situation has been playing out in Karnataka in the last couple of weeks. BJP, the party of Hindi jingoism, the robust mahapurushes of the heartland, have had to campaign in a state that has its own mother-goddess, the Kannada Bhuvaneshwari. Where there is such intense pride in the Kannada language, to rely purely on Hindi to get your message across is akin to walking into a French bakery and asking for “crossonetes”. In this landscape, the party’s power couple had no option but to travel with translators to get their message across in Kannada.

Unfortunately, as Amit Shah, was soon to find out, translators – much like exit polls – are rarely reliable.

This culminated in one of the viral videos of the last couple of weeks, in which a visibly flustered BJP chief had to argue with the translator who told a crowd in Karnataka that “Modiji is a transformer”, when he actually meant to say “Modiji is a powerhouse”. The gaffes didn’t end there; at another rally, Amit Shah’s translator accidentally told the crowd that Modiji wouldn’t do anything for the poor or the Dalits, and that he would destroy the nation. At one point, Shah himself fumbled, calling Yeddyurappa the most corrupt politician in the state while sharing the stage with the leader. Completely uncharacteristic for the ice king of the BJP, who, in the eyes of the party and some sections of the nation, can’t put a foot wrong.

As awkward as those moments were, it didn’t matter when the final results were declared. The BJP had won a majority seats (if not the vote share), and Karnataka has come a step closer to identifying with Mr Modi’s dream of a “Congress Mukt Bharat”. Even as we wait to see who will finally get to form the government in this circus of an election, one thing is for certain: That the BJP has more than a firm foot in the door in the famously unbreachable southern states.

While this victory could be attributed to a number of reasons – a ferocious social media campaign, anti-incumbency, and a caste-based voter break up that not even news channels understand – the clear influencer was the combined force of the personalities of Amit Shah and Narendra Modi. Together, they devastated oppositions and dehydrated themselves through dozens of speeches. As Swati Chaturvedi wrote on NDTV, “Despite campaign glitches, Amit Shah ran a fierce campaign which outgunned the opposition booth by booth. He commandeered untold resources in a very expensively fought election and will now enter 2019 with a giant war chest.”

What makes this achievement doubly impressive is that every one of those speeches was delivered in Hindi in a state that actively campaigns against the imposition of Hindi as a national language, with a faltering translator.

To give you an idea of how intensely Karnataka hates the imposition of the Hindi language, former chief minister Siddaramaiah came out in support of pro-Kannada activists who had damaged Hindi signboards at metro stations in Bengaluru. After the incident, the metro decided to stick to only Kannada and English signboards. In May this year, HD Deve Gowda, president of the JD(S), spoke at a meeting of the Banavasi Balaga, an organisation challenging Hindi imposition. A month prior, the Congress-ruled state government announced that Karnataka would have its own flag. As this article in The Wire puts it, this is a challenge not to the idea of India, but a political counter to the forceful use of Hindu nationalism – inextricably linked to Hindi – by the BJP.

The BJP was quick to catch on. This is one of the reasons registered users of the IRCTC portal in Karnataka get emails from the railway ministry announcing that, “Kannada is now the first regional Indian language to be printed on railway tickets.” The text is accompanied by the PM’s picture, a show of the fact that the Centre has fulfilled a long-standing demand of Kannadigas.

Yet, that’s hardly the reason Karnataka voters went for the BJP. Their victory has been despite the language barrier – and it is only going to add to the strongman aura that Modi and Shah enjoy. Every election, Shah delivers an aggressive speech in a dialect of Hindi only my grandfather fully understands, the right-wing media outlets refer to him as the modern-day Chanakya, and the BJP wins the election. It’s worked so far in 21 states across India, including states like Meghalaya and Goa, where no one speaks Hindi. That they’ve now managed to do this in a state that speaks as much Hindi as an ICSE school speaks volumes.

Weeks ago, Siddaramaiah was being lauded on Twitter for the wit and charm with which he countered barbs from the BJP chief and the PM. But clearly that goodwill wasn’t enough to help him win an election – or even win both the seats he contested in. The people of Karnataka have shown that they don’t care about social-media battles, or even about promises made on a grand stage.

They have voted for two strong personalities, who can’t seem to lose at this point.

Right now, the BJP is like the Sunny Deol of political parties. While the rest of the parties go around like Abhay Deol trying to argue their case, the PM screams loudest while walking away with the handpump, “BJP represents India and our proud diversity.”