How a City Infamous for its Apathy Stepped Up for JNU

From Gateway of India in Colaba, to Carter Road in Bandra, tens of thousands of Mumbaikars put their Mondays on hold to protest the violence that took place on JNU campus Sunday night. The message from Mumbai is clear: “We stand with JNU”. 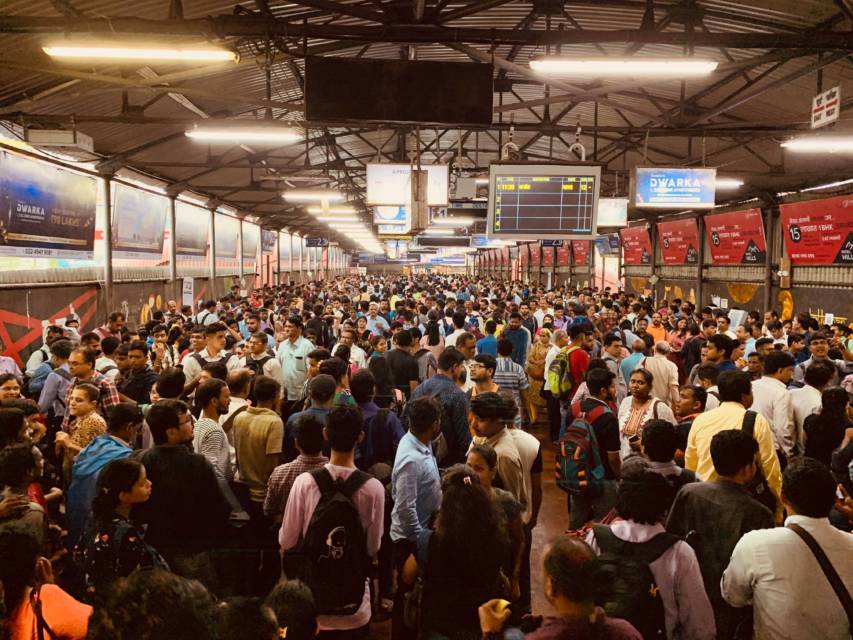 Photo by Smith Mehta on Unsplash

At 5 pm on Monday, a tall woman in a flowing white dress, her hair tied back in a high ponytail, stepped out of the Taj Mahal Hotel in Colaba, and waited patiently for the valet to show her to her SUV. Grasping a handbag in one hand and a massive phone in the other, she took a sweeping look around what would usually be an unobstructed vista of the Gateway of India, ferries dotting the Arabian Sea behind it.

However, on this evening she was met by the sight of a middle-aged man wearing a shirt and a striped green hoodie. He held a sign that said “Delhi Police Murdabad” and seemed about mid-way through a slogan. He was one of thousands of Mumbaikars gathered to protest the latest act of violence in Delhi, this time on the JNU campus. The calls to #OccupyGateway had started soon after horrifying news and images of the attack began circulating on social media, and some protestors had been camping there since the prior night. The man looked her right in the face and yelled “Zindabaaaaad” so loud, her ponytail swayed slightly in the wind.

When she was done reeling, the Taj patron seemed genuinely impressed by the man’s guttural sounds, and the massive crowd that had mobilised behind him. “Wonder what this is all about,” she asked a friend who appeared out of nowhere, and crossed the road to join Mumbai’s second large-scale protest in two weeks.

At the Gateway of India, a collection of poets, college students, singers, and activists were doing a pretty great job of explaining exactly why they were there — mainly to stand in solidarity with the students of JNU, who were brutally attacked by a mob of armed masked “outsiders” the previous night.

The protests started soon after the videos first made it to Twitter on Sunday evening. They showed what is believed to be members of the ABVP (as alleged by the brutalised students and admitted by a spokesperson on national TV), storming around the campus with lathis, sledgehammers, and bricks. By midnight, dozens of shocked Mumbaikars had already gathered at Gateway of India, which was the epicentre of the 26/11 attacks.

The next morning, Maharashtra chief minister Uddhav Thackeray had tweeted his support for the protesters, claiming that the attack in Delhi reminded him of the infamous terror attack in Mumbai, and promising that no campuses in the city would ever have to deal with masked mobs. By 5 pm, even the Mumbaikars exiting brunch plans at Taj were infected by the energy of the protestors.

The calls to #OccupyGateway had started soon after horrifying news and images of the attack began circulating on social media.

Three separate groups had formed and covered the promenade from Gateway, past Taj, and almost until Radio Club at the other end. One group was chanting Faiz Ahmed Faiz’s poem, “Hum Dekhenge” — which IIT Kanpur is in the process of vetting — another group, armed with a hand drum and three Indian flags, chanted a miscellany of inventive slogans, while a third was furiously creating posters and placards for the dozens of TV cameras.

One woman yelled into a mic, “How many of you plan to stay here today as well?” She was met with scattered but determined “yeahs”. Arrangements for sleeping and water were made accordingly. The team of Colaba Social circulated a private message on Instagram inviting protesters to use their washrooms and water coolers.

Around two hours later, by sunset, large crowds of working professionals had joined protests, and the pitch of the sloganeering had shifted. If the mood of the CAA-NRC protests at August Kranti Maidan was lighthearted and hopeful, here, against the backdrop of the gorgeously lit Taj, the speeches and sloganeering were more strident.

Post the violence at JNU on Sunday night, both ABVP and BJP spokespersons had come out on social media and on TV channels blaming “Leftist forces” for the attack and absolving themselves of all crimes. BJP spokesperson Tajinder Singh Bagga went a step further and declared all “Leftists were terrorists”. This morning, an FIR was filed against Aishe Ghosh, the JNU student president whose head was nearly split open by the attackers, in an attempt to make it seem like it was these students vandalising property.

Meanwhile, an ABVP spokesperson went on Times Now and didn’t even need to be nudged into admitting that she was asked to carry sticks, stones, and apparently, acid to campus. Once the cat was let out of the bag, a man named Pinky Chaudhary from a group called Hindu Raksha Dal claimed that it was his men behind the attack. In what was largely seen as a move to protect the ABVP, Pinky gave a brazen interview with ABP News, in which claimed he would do it again in a heartbeat.

So, obviously even college kids all the way in Mumbai weren’t going to fall for this “Left Terror” narrative. The clips emerging from the JNU campus over the previous 24 hours had clearly shown the police standing by idly as a mob walked past with lathis and hammers; phone numbers from WhatsApp groups were traced back to ABVP members online.

As protesters spent another night camping by the sea, another gathering at Carter Road was hosting a variety of Bollywood artists for a separate silent-but-not-so-silent protest.

Everywhere at Gateway Plaza, protestors held placards calling for the banning of the ABVP and the RSS, making comparisons with Nazi Germany. The message was clear, as a student from Tata Institute of Social Sciences explained at 7pm: The attack on the campus was a premeditated act of violence against students with the collusion of the police, and had no place in modern India.

About 10 minutes later, the demographic of the protest shifted dramatically, going from a quiet student agitation, into what could only be described as a deleted scene from U2’s Mumbai concert. The NRI from Taj, who had really only needed to hear the bit about students being attacked to join the protests, was not alone in her confusion. Dozens of tourists, who had been shopping for trinkets at Colaba Causeway, and making plans for dinner by the bay had stumbled onto the demonstration, and ended up staying back to witness the world’s largest democracy in action, even if it was just for a selfie or two.

As protesters spent another night camping by the sea, another gathering at Carter Road was hosting a variety of Bollywood artists for a separate silent-but-not-so-silent protest. There — with songs, poetry, hundreds of cameras, and a line of police officers — were a series of Bollywood voices: actors like Richa Chaddha, Ali Fazal, Dia Mirza, Taapsee Pannu, directors Anurag Kashyap, Vishal Bharadwaj, and Anubhav Sinha, and comedians like Kunal Kamra. They all chanted, registered their protest, and dispersed peacefully — possibly just as silently as the Carter Road joggers that populate the promenade on a regular evening.

At Gateway, meanwhile, the protests showed no signs of abating. Even though the tourists had bid their farewells, the thousands of protesters had now made their way to makeshift sleeping areas put up by organising committees, and were planning to settle there indefinitely. Unfortunately, by Tuesday morning, the police seemed to have finally lost patience, moved all the protesters to Azad Maidan, and then let them go after a few hours.

Back at the Gateway, things had presumably returned to normal. Traffic had resumed along the Causeway and the usual crowd returned to the Gateway to purchase useless plastic tchotchkes from vendors. Protesters, who were very polite and respectful on the whole, had made the effort to clean up after themselves, possibly leaving the area cleaner than it was before.

After last month’s protests in August Kranti Maidan, the BJP had tried to pass off the massive demonstrations as the handiwork of mobilised opposition parties, and those with “Islamist mindsets”. But this time it’s clear that pushing this narrative will require much more whataboutery.

No political flags were waved and no party spokesperson was in any mood to address the crowd. Instead, these two and a half days will be remembered as the day students and young professionals from Mumbai took matters in their own hands. Even as Arnab Goswami bursts blood vessels over Tukde Tukde slogans, and Twitter tries to paint college students as the biggest enemies of the state, the message from most of Mumbai is clear: “We stand with JNU”.\