Here’s why Google’s employees are staging a walkout

Thousands of Google employees from its offices worldwide joined a co-ordinated walkout on Thursday to protest against the US tech giant’s handling of sexual harassment. 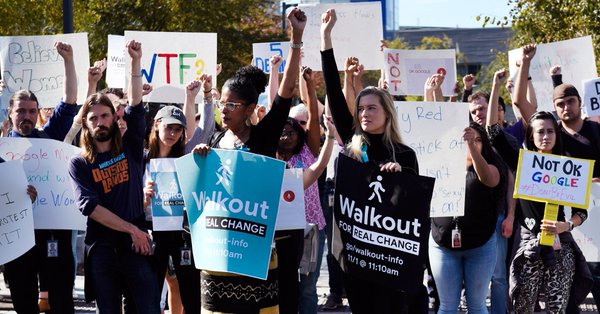 Thousands of Google employees from its offices worldwide joined a co-ordinated walkout on Thursday to protest against the US tech giant’s handling of sexual harassment.

The “Google Walkout For Real Change” account on Twitter on Wednesday urged all employees and contractors to leave their workplaces at 11.10 am local time around the world on Thursday.

“All employees and contract workers across the company deserve to be safe. Sadly, the executive team has demonstrated through their lack of meaningful action that our safety is not a priority,” said a statement published by the organisers on the website the Cut.

The statement further read, “We’ve waited for leadership to fix these problems, but have come to this conclusion: no one is going to do it for us. So we are here, standing together, protecting and supporting each other.”

The organizers are demanding employee representative to join the company’s board and for Google to end “forced arbitration” in cases of harassment and discrimination, which refers to a practice that prevents employees from taking cases to court.

Twitter was abuzz with pictures of demonstrators in Singapore, Tokyo, London, Berlin, and Zurich in a number of posts shared by the organizers, accompanied with the hashtag #GoogleWalkout.

The demonstrations come after an explosive report by the New York Times. The report detailed how Google shielded executives accused of sexual misconduct, either by keeping them on staff or by offering them huge sums of money to exit the company.

How did the protests start

The protests started at Google’s offices in Tokyo, then Singapore. The demonstrations were followed by massive walkouts across Europe and the East Coast of the United States. In a co-ordinated joint effort, the walkouts began at 11:10 am local time in each time zone, and were meant to send across a clear message to Google – that such cover-ups will not be tolerated.

Who is Andy Rubin and how did Google protect him

Andy Rubin, an engineer and entrepreneur, joined Google in 2005, after the company acquired Android. Rubin was a critical part of growing Android’s success, and was often referred to as “the father of Android”. He developed the software which is currently used in 80 percent of the world’s smartphones – this has helped Google produce billions in profit.

Rubin was granted a hero’s farewell when he left Google in October 2014. However, Google never shared any details about an employee accusing Rubin of sexual misconduct.

The woman, with whom Rubin had been having an extramarital relationship, said that he coerced her into performing oral sex in a hotel room in 2013, as per the New York Times report that cited two company executives who were familiar with the matter.

Google investigated the matter and concluded that the woman’s claim was credible, the two sources told the New York Times on the condition of anonymity. They then said that Rubin was notified about this. Larry Page, Google’s then chief executive, asked for Rubin’s resignation.

Google gave Rubin a $90 million exit package, which was paid in installments of about $2 million a month for four years, the two people said. The final payment is scheduled for next month.

Rubin was one of three executives that received protection from Google over the past decade after they were accused of sexual misconduct.

In two instances, Google fired senior executives, but offered them millions of dollars as exit packages, even though it had no legal obligation to do so. In the third instance, the executive continued to work for Google in a highly compensated post. Google constantly maintained its silence about the accusations against the men.

Terming the allegations as a “smear campaign,” Rubin refuted the New York Times report. “The New York Times story contains numerous inaccuracies about my employment at Google and wild exaggerations about my compensation,” Rubin said in a statement after the article was published.

“Specifically, I never coerced a woman to have sex in a hotel room. These false allegations are part of a smear campaign by my ex-wife to disparage me during a divorce and custody battle.”

What are the campaigners’ demands

Google’s employees have shared a list of demands with company executives that they believe will help end “the sexual harassment, discrimination, and the systemic racism that fuel this destructive culture.”

We, Google employees and contractors, will walkout on November 1 at 11:10am to demand these five real changes. #googlewalkout pic.twitter.com/amgTxK3IYw

How has CEO Sundar Pichai responded

Google CEO Sundar Pichai apologized for the company’s “past actions” in an email sent to employees on Tuesday. “I understand the anger and disappointment that many of you feel,” Pichai wrote. “I feel it as well, and I am fully committed to making progress on an issue that has persisted for far too long in our society. and, yes, here at Google, too,” Pichai said, the Associated Press reported.

The email had no mention about the report involving Rubin, or anyone else. Pichai did not dispute anything mentioned in the New York Times’ report.

“Moments like this show that we didn’t always get it right, and so we are committed to doing better,” Pichai said at the DealBook conference, CNBC reported.

Pichai admitted that Google has a problem with sexual harassment, after he said that 48 employees were fired over allegations of sexual misconduct. “There’s anger and frustration within the company,” Pichai said on Thursday. “We all feel it. I feel it too,” as per the CNBC report.

The protests are sure to cause a dent in Google’s reputation. They reflect a deepening moral crisis within the company. Several employees at the tech giant have been questioning whether Google has “lost its moral compass” in an attempt to enrich shareholders.