The sprinter said she was inspired to come out after the country reversed a colonial-era ban on gay sex. 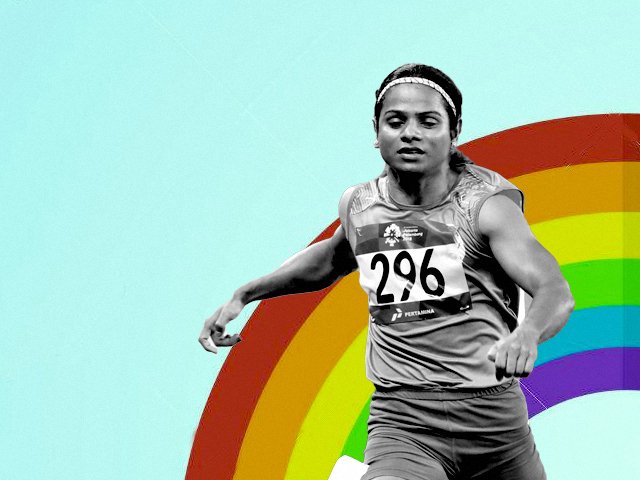 Star athlete Dutee Chand announced that she is in a same-sex relationship, thereby starting an important conversation about sexuality in India's public sphere. Credits: Debanjan Chaudhary

On Sunday, May 19, national champion and Olympic sprinter Dutee Chand, became the country’s first openly LGBTQ+ sportsperson. She came out as bisexual, revealing that she has been with her “soulmate” for the last five years. Chand, however, did not reveal the identity of her partner as she did not want make her “the centre of undue attention” but added that she might want to settle with her in the future.

Citing the Supreme Court’s verdict last year repealing the colonial era Section 377, Chand, 23, said that the historic ruling, which decriminalised gay sex had encouraged her to come out.

“I have always believed that everyone should have the freedom to love. There is no greater emotion than love and it should not be denied. The Supreme Court of India has also struck down the old law. I believe nobody has the right to judge me as an athlete because of my decision to be with who I want. It is a personal decision, which should be respected. I will continue to strive to win medals for India at international meets,” Dutee told the Indian Express.

A braveheart and a worthy cause

But speaking publicly about one’s homosexuality continues to claim a price in a conservative society like ours.

Reports have since emerged that Chand’s family has threatened to expel her with her mother refusing to accept her same-sex relationship, while Chand’s sister has accused her partner, a girl from Chaka Gopalpur, of “pressurising and blackmailing her.

“Those people who claim to have played a role in Dutee’s success are the culprits. It’s them who are deviating her from sports and miring her into controversy. She’s been led into a trap,” sister Saraswati has alleged, further threatening Dutee with imprisonment.

Chand, however, confirms that all her mentors have expressed their wholehearted support for her life decision. Besides being hailed for her revelation and praised for her courage, crude jokes attacking Dutee for her sexual orientation have also flooded the social media.

Hailing from Odisha’s Jajpur village, this is not the first time Chand has brought issues involving gender and sexuality to the forefront of national dialogue.

In 2015, she became the mascot for hyper-androgynous women fighting for their eligibility in field and track events, when she appealed against the IAAF’s rules at the CAS in 2015, after being forced her to miss the Commonwealth Games 2014 for failing a controversial “gender” test.

Chand had then told the New York Times that she would not conform to the pressure from coaches to undergo treatment to alter the testosterone levels in her body.

“I feel it is wrong to change your body for sport participation. I’m not changing for anyone. It is like in some societies where they used to cut off the hand of people caught stealing. I feel like this is the same kind of primitive, unethical rule. It goes too far,” she is quoted as saying.

Also read: Caster Semenya and the double standards behind mandate on female athletes to suppress hormones

Wearing homosexuality on your sleeve

Chand’s latest announcement about being in a same-sex relationship is of immense symbolic importance to India’s LGBTQ+ community that has overcome its legal hurdle but still has a long way to go in terms of the rampant homophobia embedded in its social code.

Heteronormative values are perpetuated not only at the microcosmic level, by the conservative family and matrimonial structure (laws don’t deem gay marriages legal yet), but also due to the dearth of non-binary sex education in schools and textbooks, and through mispresentation in media.

Like most young men and women struggling to discover their sexualities, the space called “home’ has become a crucial front for Chand’s battle for acceptance. Her own mother told ANI that she would not be able to accept the relationship saying, “Dutee wants to marry a girl, who is the daughter of my niece, so she is my grand-daughter. In this relation, Dutee will be like a mother of that girl. Then how will it be possible in our society in Odisha.”

When will India come out of its closet?

There are several celebrities in India’s entertainment industry who have been outed as gay or whose sexual orientation has become the subject of tabloid speculation. Chand by controlling the narrative of when and how to come out, therefore, sets a precedent. Stalwarts like Billie Jean King was refused that opportunity but those were different times.

Coming out in sport is still a relative rarity, especially in team sports, and while it now happens with increasing frequency in the West, it is more due to societal repercussions that in South Asia, it is still far less frequent to see an “out” sportsperson, writes Firstpost.

Moreover, people in rural areas without access to LGBT literature, films, allies, awareness, activism and safe spaces to share their experience, are the most vulnerable and marginalised when it comes to their sexual identities. Support from families, friends, and entire communities is extremely vital for the landmark ruling to have effect in overhauling centuries of deep-seated prejudice against the LGBT community.

With local heroes coming out, perhaps greater acceptance will follow.

Simply put, legal acceptance has to be supplanted by social acceptance which necessitates that a greater number of prominent figures come out of the closet to affirm, celebrate and popularise the culture, now that the law is on their side.

Chand maintains it is her personal decision, but her act of bravery will hopefully encourage more men and women to openly embrace their sexuality which, in turn, will help erase the binary precepts we have boxed things into.

For India’s fastest sprinter who’s won two silver medals for the country in the 2018 Asian Games, Chand’s focus right now in on the World Championships and the Tokyo Olympics in 2020. She is currently training in Hyderabad.