Gucci is selling ‘Indy Turbans’, and Amazon toilet covers of Hindu gods: Here’s why the backlash is fierce

Cultural appropriation is interpreted as re-packaging non-western practices for a western audience, stripping non-western countries and figures of credit 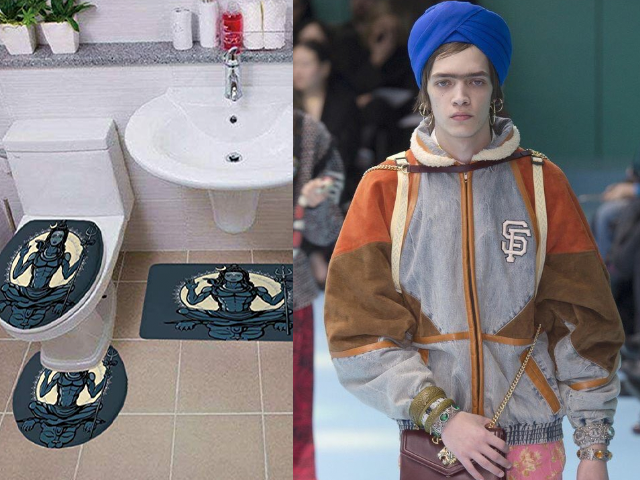 After receiving criticism for making Caucasian models where turbans on the runway, Gucci has again come under fire for selling those very turbans for an exorbitant price on Nordstrom. Amazon, too, is now receiving backlash for selling rugs and toilet seat covers that depict gods from Hindu mythology.

Nordstrom, a high-end American store that curates fashion from different brands, put Gucci’s “Indy Full Turban” on sale for $790, which is over Rs 55,000.

The store said the product was “A gorgeously crafted turban” that is “ready to turn heads while keeping you in comfort as well as a trademark style”.

Amazon has also been marketing products—toilet seat covers and rugs—with artwork of Hindu gods on it.

Gucci and Nordstrom’s critics have accused them of cultural appropriation while those of Amazon have said the platform is disrespecting Hinduism.

What is cultural appropriation?

Cultural appropriation is a phenomenon that has gained more traction in recent years because of increased globalisation and social media communication.

When someone who is not a member of a certain cultural group exploits that group’s traditional symbols or garb as a trend or fashion statement without any real understanding of its significance, the person is engaging in cultural appropriation.

In 2017, Victoria’s Secret was accused of cultural appropriation when it made models wear traditional Native American-inspired costumes.

The issue here is twofold: adopting markers of cultural group (usually one that’s less dominant or privileged) without belonging to that group and using them in a context that seems disrespectful, like a fashion statement or trend aiming to get social capital and praise.

Other models and, by extension, the fashion show was also criticised for capitalising on tribal tattoos, patterns, and neck rings.

One of Victoria’s Secret most famous models, Karlie Kloss, apologised for modelling a Native American headdress during the show.

She said, “I am deeply sorry if what I wore during the VS Show offended anyone. I support VS’s decision to remove the outfit from the broadcast.”

Cultural appropriation goes beyond physical markers of identity as well.

In January, authors of a report in an American science magazine, Scientific American, were accused of cultural appropriation when they renamed pranayama, a yogic breathing technique, as “cardiac coherence breathing”.

Cultural appropriation is also increasingly interpreted as a re-packaging of non-western practices for a western audience and, thereby, stripping non-western countries and figures of credit.

Did Gucci and Amazon make a mistake?

Some people believe that Gucci advertising itself through turbans does not lessen the turban’s value. Others said the brand was “positively” portraying the turban in the West and increasing awareness about Sikhism.

A Sikh man tweeted that Gucci and brands in general selling pre-wrapped turbans makes it easier for him to wear one because he cannot wrap one himself.

However, many strongly condemned Gucci, accusing the brand of cultural appropriation and commodifying a sacred element of Sikh culture. They said a turban, which was a very public identifier of faith, should not be marketed as an accessory for everyone.

Harjinder Singh Kukreja tweeted, “Dear @gucci, the Sikh Turban is not a hot new accessory for white models but an article of faith for practising Sikhs. Your models have used Turbans as ‘hats’ whereas practising Sikhs tie them neatly fold-by-fold. Using fake Sikhs/Turbans is worse than selling fake Gucci products.”

Another Twitter user said people bully and mock Sikh boys for wearing turbans in schools but consider them trendy if a fashion brand uses them.

People also suggested that if Gucci intended to be inclusive, it could have employed turban-wearing Sikh men to model their garments instead.

The Sikh Coalition did not have an issue with Gucci monetising the turban, but it did not appreciate Nordstrom advertising it as a general accessory for all social groups.

The organisation said it has reached out to Gucci and Nordstrom to address the matter.

It tweeted, “The turban is not just an accessory to monetize; it’s a religious article of faith that millions of Sikhs view as sacred. Many find this cultural appropriation inappropriate, since those wearing the turban just for fashion will not appreciate its deep religious significance.”

With Amazon, people believe that placing the images of Gods on products that do not symbolise purity and cleanliness—like toilets and rugs—is disrespectful.

Sushil Dixit said, “Mistake is a mistake when it is done once or twice. But #Amazon is a repeat offender who seems to enjoy hurting the religious sentiments of #Hindus Do you have the guts to sell products mocking Islam or Christianity or Hindus are soft targets??”

Amazon has also been previously hauled up for selling merchandise with the Indian Tricolour on it. Countries like the US differ greatly from India when it comes to celebrations of independence from colonialism.

For India, especially, the struggle for independence is a relatively recent memory and commodification of civil struggle or political merchandise is not commonplace. Even the Indian flag code dictates a solemn set for rules for using the Tricolour and hoisting the flag that all people and organisations follow.

While there may be no inherent disrespect in making designer turbans, burkhas or niqabs, or selling merchandise with cultural imagery, how companies market those products is of utmost importance. Context should get priority over all else.

Brands should clearly state the significance of any products that come with deep cultural heritage and not target customers who are not from that community. They should also use diverse models when commodifying such items.