Google Maps will be updated with multiple new features intended to turn the app into a one-stop shop for planning a night out. 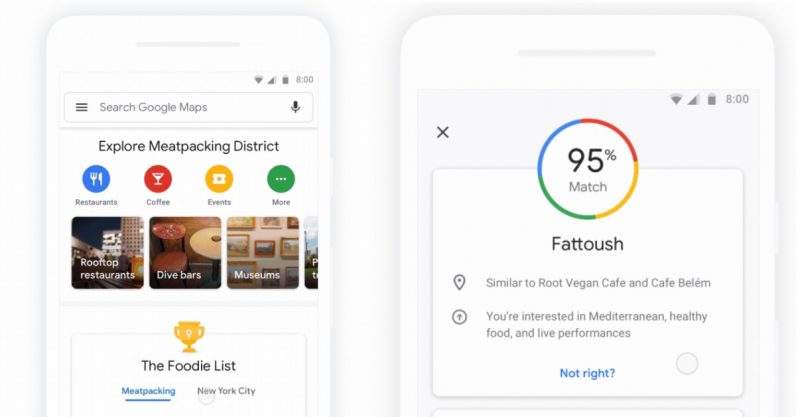 Google announced this week it’s overhauling Maps with multiple new features intended to turn the app into a one-stop shop for planning a night out. In borrowing features from apps like Yelp or Foursquare, Maps shows the potential to surpass both of them.

For starters, Google is redoing the Explore tab. Currently, it’ll show you a listing of local businesses and some restaurant ideas based on the time of day. With this update you’ll see a list of trending topics related to the area you’re in, including a top ten list of restaurants. Again, Yelp and Foursquare … all the features look very familiar so far.

“The most intimate digital technology festival on the planet”

One new feature which sets Maps apart from the likes of Yelp is matching. Using data on where you’ve gone in the past, your Google reviews, and all of the info Google has about a location, Maps will give you a match percentage. It amounts to a guess as to how likely you are to enjoy a restaurant — sort of like OkCupid, only it’s matchmaking your stomach.

Finally, Google’s putting in new options for group planning. If you and a bunch of friends want to go out, but aren’t sure where, you can put together a short list in Maps. The list is shareable, meaning the other group members can contribute to it, and everyone can vote on the place they’d most like to go.

If nothing else, it democratizes the question, “I don’t know — where do you wanna eat?”

Any one of those features would be enough to raise Google Maps’ profile to the level of other dining apps. Taken together, they elevate Maps to something more than any app I’ve yet found.

If you’re already using Google Maps to navigate to restaurants or activities you’ve found via other apps, then this cuts out the middle man. It remains to be seen if it has the same community engagement that drives the feedback on Yelp, or the ubiquity of Foursquare.