Human infrastructure deserves to be treated in the same manner as the traditional kind. 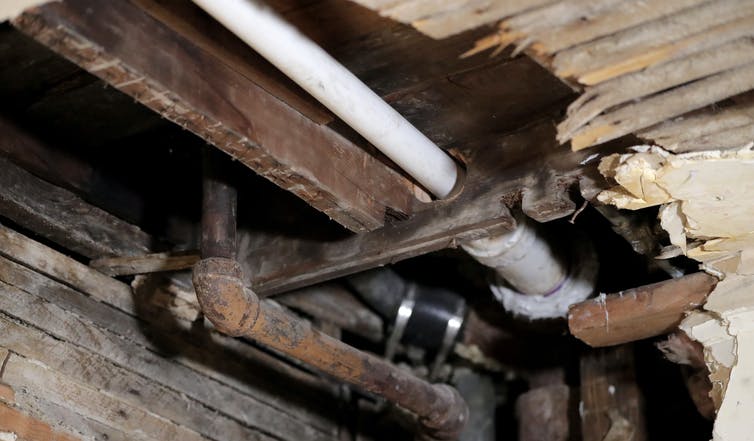 Or that seems to be the ambition of President Joe Biden as he barnstorms the country in hopes of selling the US$579 billion bipartisan infrastructure deal he signed on to. He’s making it clear, though, that he’s committed to his original plan to spend trillions more – including on what he called human infrastructure.

In Wisconsin, he called the deal the largest federal infrastructure effort since the interstate highway system was created in 1956. Unlike his more ambitious original $4 trillion plan, the bipartisan deal would focus on physical infrastructure, like roads, pipes and the power grid.

Experts writing for The Conversation have been highlighting areas of America’s infrastructure that are in urgent need of attention – as well as the reasons human infrastructure deserves to be treated in the same manner as the traditional kind.

The bipartisan deal includes $55 billion for water infrastructure, including the elimination of lead service lines and pipes.

That’s good news, says Gabriel Filippelli, a geochemist and environmental health researcher at IUPUI who has studied the heartbreaking impacts of lead poisoning in children for decades. He calls lead in pipes a “silent killer” that disproportionately affects poor communities of color.

“Children with lead poisoning have lower IQs, poor memory recall, high rates of attention deficit disorder and low impulse control,” he writes. “They tend to perform poorly at school, which reduces their earning potential as adults. They also face increased risk of kidney disease, stroke and hypertension as they age.”

2. Why the US needs a macrogrid

Another part of America’s core infrastructure that would get new investment from the deal is the U.S. electrical grid, including improvements that would make it easier to move power from one part of the country to another.

Today that’s not possible because the U.S. has multiple grids that don’t interact well, explains James D. McCalley, an electrical engineer at Iowa State University. Connecting those into a macrogrid not only would reduce the cost of power for customers and encourage more clean energy production, it would pay for itself in a few decades.

“We calculated that if the U.S. spent $50 billion to develop a macrogrid, the total long-term cost of developing and operating the nation’s electric power system and achieving 50% renewable electricity in 2038 would decrease by more than $50 billion,” he writes.

Biden’s original plan called for $425 billion for child and home care, areas that aren’t traditionally thought of as infrastructure. The bipartisan plan wouldn’t devote any money to what Biden has called “human infrastructure,” but Biden promised Democrats would try to include this in a separate bill they hope to pass on their own.

Mignon Duffy, a sociologist at University of Massachusetts Lowell, explains why child and home care – and the workers doing those jobs – are just as critical to the nation as roads and bridges.

“The pandemic forced many child care centers across the country to shut down, while many home-based nannies and personal care aides were let go because of COVID-19 concerns and precautions,” she writes. “The media was full of stories about the crushing burdens faced by working parents – mostly mothers – trying to simultaneously manage caring for children at home. And older adults isolated at home suffered from lack of access to formal home care support as families struggled to meet their needs.”