Five years of Queen: The complicated legacy of the film that celebrated feminism

Queen is a rare legit classic, as relevant today as it was in 2014. Queen’s legacy, however, is a complicated mess, a seminal piece of art cursed to bear the burden of its creative mind who got swamped in the #MeToo wave. 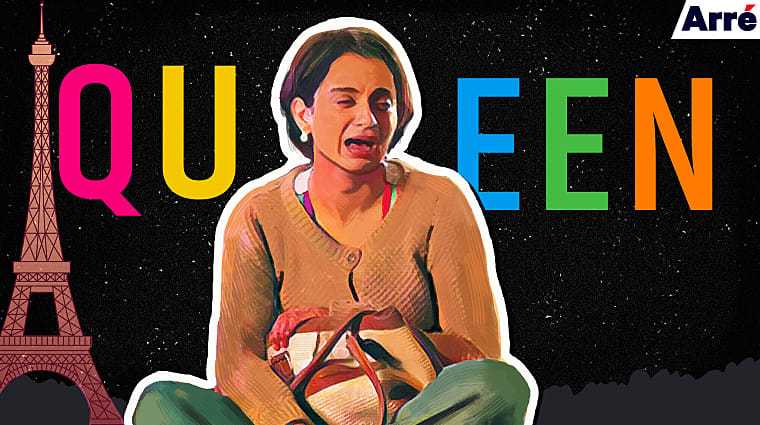 Queen completes five years this week. In a rather bizarre, but completely unrelated turn of events, this is also the week Kangana Ranaut announced that she is gifting herself (and the rest of the world) 10 days of silence before her birthday. My Twitter timeline celebrated the news with a relieved sigh before quickly dissolving into a blur of loud, angry and largely misplaced arguments about feminism and our general hatred for women with opinion while unironically dragging down actual women with opinion. And that right there is a sneak peek into the legacy of Queen, a snapshot of how the world has evolved and devolved ever since its release five years ago.

Rewatching Queen is a surreal experience. And for once, it isn’t because a movie has aged so horribly, you question your own sensibility and past self for ever liking it. On the contrary, Queen is a rare legit classic, as relevant today as it was in 2014. Queen’s legacy, however, is a complicated mess, a seminal piece of art cursed to bear the burden of its creative mind who got swamped in the #MeToo wave.

That wave, where sexual harassment allegations were levelled against director Vikas Bahl by multiple women, brought down an entire production house – which is difficult to reconcile with the movie’s feminist underpinnings about freedom and identity. It reminds you how much it hurts when we are forced to separate the art from the artist.

And then there is Kangana, the fiery feminist icon who really discovered herself in Queen, and took on the many evils of Bollywood, destroying stereotypes both onscreen and off. And then one day, veered far right and transformed into an anti-liberal, extremist mouthpiece whose favourite gossip partner was a loaded Godman who regularly murders science.

To be fair, Kangana’s personal beliefs are none of our business, and what she has done is no different from her politically well-aligned male counterparts. It is harder to process simply because the ideologies she has aligned herself with are based on the same patriarchal foundations that she had always seemingly rallied against, the foundations that Queen was designed to assail. The incongruence is not entirely unexpected. But it is still disturbing.

Back in 2014, Queen was a feminist fantasy that seemed like a great aspirational fairytale, but in a lot of ways too good to be true. Then, I turned to travelling to “find myself”, and, just like Rani, a bunch of transient relationships — friends, acquaintances, and fellow travelers — became my companions in that life-altering quest. Cut to 2019, an eventful life and multiple adventures later, Queen transcended the fairytale status and became a story that resonates with my life experiences in ways few other things can.

Before I set out to travel, it was easy to dismiss the parallel world of Queen where solo women travellers stayed in co-ed hostels. It was even easier to dismiss the idea of finding male roommates who were warm, friendly, safe and respectful — strangers in foreign lands who became better friends than the ones you spent a lifetime with. And yet, as I discovered, few bonds can match the ones we forge when we travel.

The pertinence of the film does not end there. In this post #Metoo era, where women all over the world have a dawning realisation of the support they can find in each other, Queen’s refreshing take on Rani’s friendship with Lisa Hayden’s Vijay resonates like never before. A fine example of on-screen female bonding, their friendship shines because it defies every stereotype built around female friendships: It isn’t a relationship that is raucous like sorority sisters, or catty, or rising from the debris of gossip and bitching. Instead, Rani and Vijay’s friendship remains understated, with a solid foundation of non-judgmental support and understanding. They are two wildly different women who are happy to let each other be, and if that is not a model of friendship worth emulating, I don’t know what is.

My absolute favourite scene, the one that summarises their relationship, is where after preparing for a wild night out, Rani asks Vijay to do something else. She agrees, no hesitation whatsoever, happy to give up her fun night for watching the Eiffel Tower – something that was probably not half as magical for her as it was for Rani. It was a remarkable moment because it rang so true. Because that is what girlfriends do, irrespective of whether they’re transient or long term, offline or online. They don’t just listen to you ugly-cry over a breakup, nurse your hangover, and make fun of your idiot relatives. They give up their own cherished plans at the drop of a hat, just because you asked them to.

Kangana’s recent vow of silence is an excellent, unintended tribute to Queen which for all its flamboyant feminism, is a quiet movie that makes its best statement in its silences. Even in the most dramatic moments, Rani chooses to face her fears and let go of her past without bitterness, drama and long-winded speeches. Her final declaration of freedom is topped off with a heartfelt “thank you” to her ex-fiance, a gratitude you feel in your bones, having seen the world through Rani’s eyes. Not to mention the subtle point Queen makes with my most favourite character in the history of Hindi cinema — a  chaste Urdu speaking pole dancer who did not mind her job and refused to be ashamed of it, destroying every female stereotype ever known to man in a single stroke.

Irreconcilable discordance aside, Queen is a winner not because of its lead actors and makers, but despite them. It is a piece of art with a life of its own, a story that makes you feel connected to the world in ways few things can. Beyond the feminism, it is a story of human triumph that gives you hope and makes you want to fight for your happiness. It makes you want to believe in people, in friends, in strangers who become your fleeting accomplices in the journey of life. And that is the true legacy of Queen.

Runjhun Noopur is a writer based out of nowhere (or anywhere, depending on who you ask). She writes, talks, eats, and inserts oxford comma, mostly in that order. She also likes to believe that she can teach people all about happiness.