Explainer: What the new nuclear deal between India and US is all about

As per the nuclear deal, six US plants will be built in India; the US also reaffirmed its strong support to India’s membership to the elite NSG 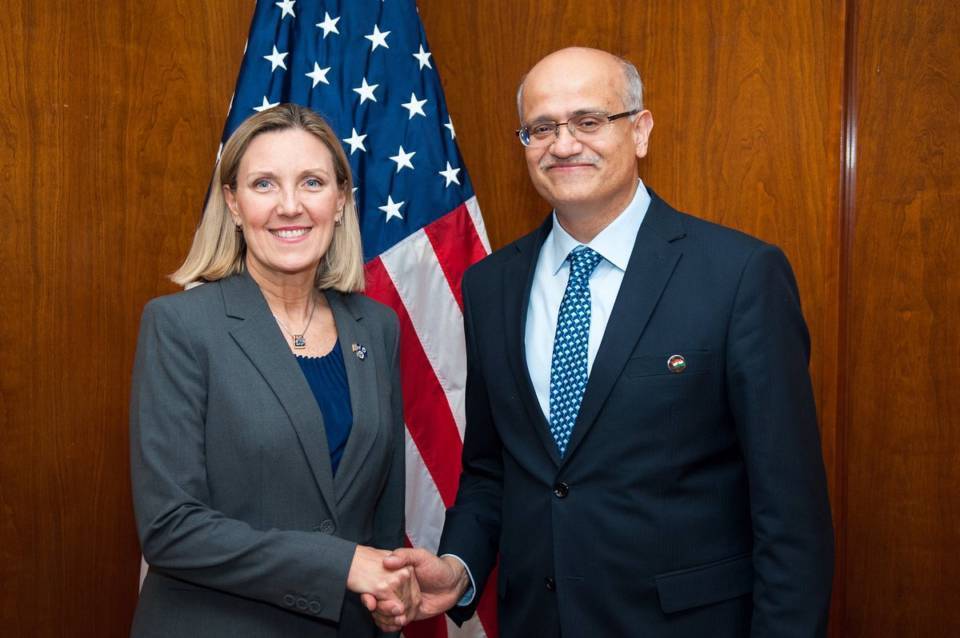 US Undersecretary of State Andrea Thompson and Foreign Secretary Vijay Gokhale met to discuss the terms of the new nuclear deal. Credit: Twitter/@UnderSecT

India and the US, on Wednesday March 13, signed a deal on closer security and civil nuclear cooperation, after two days of talks in Washington. The deal includes building six US nuclear plants in India.

Indian Foreign Secretary Vijay Gokhale and US Undersecretary of State for Arms Control and International Security Andrea Thompson met to discuss the terms on which both countries could take their nuclear pact forward.

“They committed to strengthen bilateral security and civil nuclear cooperation, including the establishment of six US nuclear power plants in India,” said the joint statement, which skirted technical details and financial aspect of the deal.

India, which has been the world’s third-biggest buyer of oil for more than a decade, is also its largest arms importer. Although most cooperation in nuclear development has ostensibly been restricted to civil projects,
it is being extended to other areas, like defence and space technology.

India and US strengthen nuclear bond

According to Business Standard, India’s nuclear pact with the US did not lead to India setting up foreign-built reactors yet, but it did help operate domestic power plants and give India access to critical technologies in strategic areas, including alternative energy. It also enabled India to separate its civilian and military programmes.

The country currently has 15 of its reactors under the International Atomic Energy Agency (IAEA); it also reportedly plans to triple its nuclear capacity by 2024 to wean Asia’s third-largest economy off polluting fossil fuels.

In terms of electricity generation, nuclear power’s share of the total power production in the country in 2008 was 2.03%, which rose to 3.2% in 2017, expert in public policy M V Ramana said. However, the growth in nuclear power has, so far, failed to match the projections that India set at the outset: 20 gigawatts by 2020.

Al Jazeera argues that a long-standing obstacle had been India’s liability laws, which require that the operator shoulder costs of any accident, rather than the maker of a nuclear power station. According to media reports, the BJP government in 2014 agreed to cover additional costs of up to $300 million through a special drawing rights account from the International Monetary Fund.

The latest agreement between Delhi and Washington came about at the conclusion of the 9th round of India-US Strategic Security Dialogue in the US.

The two nations had signed their first-ever agreement to cooperate in the civil nuclear energy sector in October 2008. Following up on it, the US in 2016 announced it would build six nuclear reactors in Andhra Pradesh.

However, the project was thrown into temporary doubt when Pittsburgh-based arms manufacturer Westinghouse filed for bankruptcy in 2017 after cost overruns on US reactors. Last April, US Energy Secretary Rick Perry received huge support to continue with the project.

The Indo-US nuclear cooperation agreement gave a fillip to the ties between the two nations, which, since then, have been on an upswing. According to The Hindu, a major aspect of the deal was the Nuclear Suppliers Group (NSG) that gave a special waiver to India; this enabled it to sign cooperation agreements with a dozen countries.

As the import of nuclear fuel (uranium-235) rose to over 7,841.51 metric tons in 10 years, so did the efficiency of existing plants, which stands at 80% right now, according to former diplomat Rakesh Sood. Last October, India and Russia signed a noteworthy pact to build six more nuclear reactors at a new site in India, following summit talks between their leaders in Delhi.

On March 13, the US reaffirmed its strong support to India’s membership in the 48-member NSG. Notably, China has denied India’s application to the elite grouping that seeks to prevent proliferation of nuclear weapons.

During the meeting in Washington this week, both sides exchanged their views on a wide range of global security and non-proliferation challenges; they also pledged to work together for non-proliferation of weapons of mass destruction and their delivery systems and check access of such weapons to terrorists or non-state actors.

India is one of the few nations that aren’t a part of the non-proliferation treaty; it is, however, free to engage in nuclear trade.

A brief history of nuclear testing in India

After India conducted a nuclear test as part of its not-so-secret nuclear weapons programme in 1974, international sanctions hit the country’s defence, nuclear, and space programmes with a ban under the Nuclear Non-Proliferation Act of 1978.

Undeterred for the moment, India kept testing nuclear weapons. In 1996, it refused to sign the Comprehensive Nuclear Test Ban Treaty; in 1998, it declared itself a nuclear weapon state, quickly followed by rival Pakistan’s own tests.

“We knew that we had limitations on nuclear trade, so there was a need for progress within,” said Anil Kakodkar, former chairman of the Atomic Energy Commission and former secretary, Department of Atomic Energy, when the 2008 deal was signed. The agreement effectively ended the 34-year ban on nuclear trade with India.

By then, India had developed Pressurised Heavy Water Reactors, which are currently the backbone of the Indian nuclear power generation. But the need for uranium soon hit the domestic reactors, complemented by the growing demand for clean energy to support the economy and conserve the environment. By 2006-2007, reports say, the performance of Indian reactors had reduced by 50-55% due to a shortage of nuclear fuel.

After the 2008 deal, a unit of Rajasthan Atomic Power Plant, where production was delayed due to these constraints, went on to create a record of a continuous run of 765 days in 2016 at its full capacity of 220 MWe.

Why this nuclear deal matters

According to The Bulletin, the 2008 deal marked a watershed moment in the history of Indo-US relations. It brought about the transition from a lukewarm at best and adversarial at worst relationship during the Cold War to the first strategic partnership, which paved the way for trade, opened up India’s economy and nudged Indian foreign policy to align with the US’.

More importantly, India also received all the benefits of being an NPT member without any of the drawbacks, which usually entailed the dismantling of all existing nuclear weapons.

India’s smaller reserve of its own uranium is not under IAEA monitoring, leaving it to be used for its weapons programme.

But there are complications

The Indo-US nuclear partnership has certainly complicated the nuclear standoff in South Asia.

India’s status as a country having nuclear weapons remains unclear for the most part, except for brief glimpses of frenzy, like in the aftermath of the Pulwama attack, when both Delhi and Islamabad sounded warnings to unleash their respective nuclear power on the other.

Various US estimates put India’s nuclear arsenal between 110 and 120 bombs; meanwhile, Pakistan reportedly continues to expand a nuclear weapons stockpile of an estimated 110 to 130 warheads. Last month, it even spooked the international community, which doesn’t wholeheartedly believe both nations to be capable of an annihilating nuclear showdown.

Despite the US’ hardline stance against rapid nuclearisation in North Korea, China, and Iran, India gets a pass for some inexplicable reason. The discourse associated with the Indo-US deal was completely devoid of nuclear disarmament, indicative of a larger problem.

Now, with the US proposing to build six nuclear plants in India, the latest agreement not only marks the culmination of the 2008 deal but also reaffirms its internationally acknowledged but unspoken term: India could keep its weapons programme under wraps and expand it as it wished.