Jab they met: All you need to know about the historic North-South Korea meet

The historic accord marks a surprising development after a year of furious missile firings, tests, and threats as the Korean War finally ends. 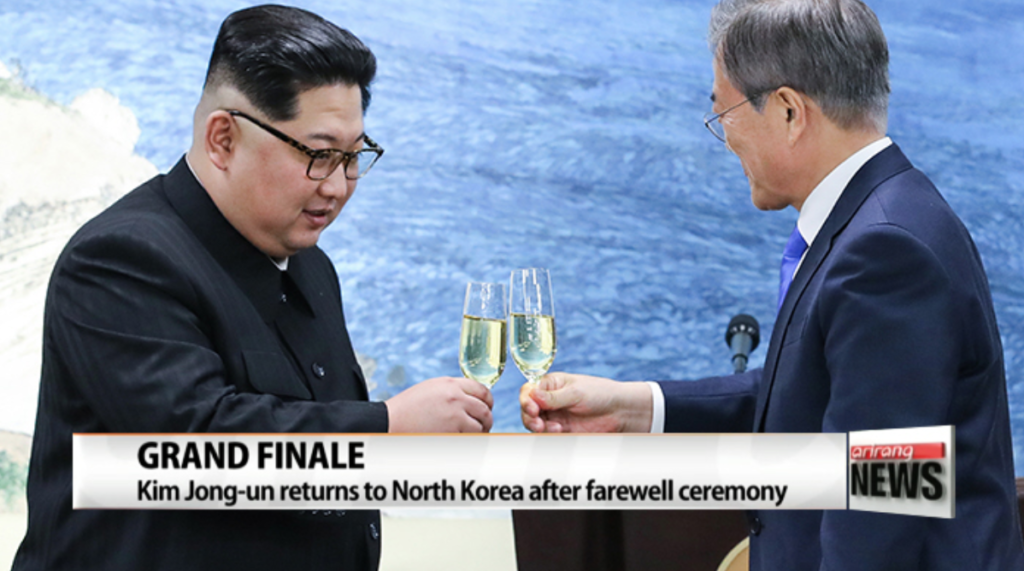 In a dramatic announcement on Friday morning, North Korean leader Kim Jong Un and South Korean President Moon Jae-in signed a declaration to achieve “complete denuclearisation of the Korean peninsula“, following a historic day of talks on the heavily-armed border that has separated the two neighbours for seven decades.

The leaders have agreed to work towards ending the Korean War which ended in an armistice, rather than a peace treaty about 65 years ago. The agreement will mark an end to an epoch of tension between the longstanding rivals and also set the tone for Kim’s high-profile meeting with US President Donald Trump, scheduled later in May.

After a furious year of missile launches and Nuclear testing, a historic meeting between North and South Korea is now taking place. Good things are happening, but only time will tell!

Forged in the demilitarised zone of Panmunjom, the atmosphere was one of congeniality as thousands of hopeful Koreans, both in the North and South, breathed a sigh of relief as their volatile leaders embraced on television after signing the historic accord.

The groundwork for a successful inter-Korean summit had been laid earlier this month, when Kim announced to join the global efforts towards denuclearisation by suspending the further nuclear and ballistic missile tests on Korean soil, even shuttering a test site, saying their goal is “complete”. It did lead to a conducive environment for yesterday’s peace talks at the truce village of Panmunjom.

“The nuclear freeze that has already been put in place by the North has a very significant meaning,” Moon said after the summit. “It will be an important step towards complete denuclearisation of the Korean peninsula.”

At their first summit in over a decade, both sides have sought to establish “permanent” and “solid” peace regime in the peninsula, pursue military arms reduction, cease “hostile acts”, turn their fortified border into a “peace zone”. They have also agreed to seek multilateral talks with other countries, such as China and the United States, both parties to a ceasefire that left the inter-Korean war in a limbo for 65 years.

Both countries have decided to hold a reunion for around 57,000 families sequestered and separated due to the war. Kim has further promised to ensure that the agreement reached with Moon is implemented, unlike previous peace pledges which fizzled out after a promising start.

Coming only months after Kim had threatened to deploy and expand his nuclear arsenal to annihilate the US for refusing to demilitarise South Korea, this agreement marks a huge development in the global political landscape. The leaders’ decision to sign a joint accord comes as a pleasant surprise after a year of furious missile firing, testing, and threats that brought the spectre of war back to the Korean peninsula.

While neither leaders have announced what concrete steps will be taken to achieve these goals, both nations agreed to push for further high-level talks and other negotiations to decide upon the same.

British Foreign Secretary Boris Johnson said he welcomes the summit and hopes North Korea honours its commitments. However, Johnson added he doesn’t expect any major breakthroughs given Kim’s history of not following through with his own decisions.

Welcome positive developments at today’s #InterKoreanSummit. Important that today marks a new era in inter-Korean relations and confirms a change of course from Kim Jong Un. North Korea must now honour its commitments and take concrete steps to denuclearise.

China has welcomed the summit and applauds the leaders of both countries for taking a “historic step” toward peace.

Earlier Friday, Kim told Moon that he feels like he’s “firing a flare at the starting line in the moment of [the two Koreas], writing a new history in North-South relations, peace and prosperity.” His words and the terms of the agreement, if honoured, may act as the political bellwether for a new dawn, bringing two countries back from prolonging the war.