In what is deemed as a significant development in the world of science and medicine, a robot was used for the first time to remove a rare tumour from a patient’s neck 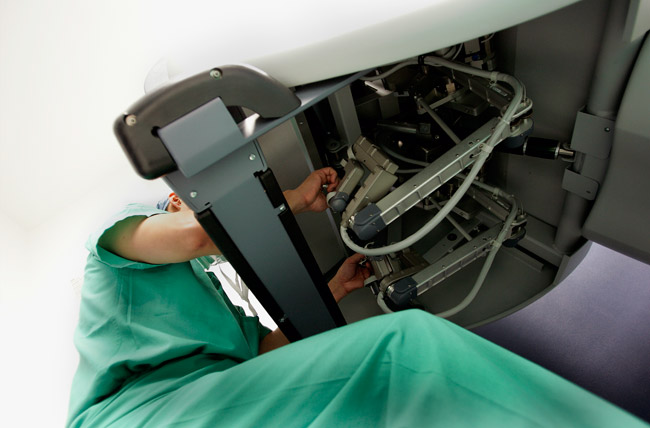 The TransOral Robotic Surgery (TORS) Program was started at the University in 2004. Credit: Penn Medicine.

A robot was successfully used to extract a rare tumour from a patient’s neck in a surgery led by an Indian-origin surgeon. Noah Pernikoff, a 27-year-old US citizen, became the first patient in the world to undergo a complex three-part surgery assisted by robots. The surgery was completed at the Hospital of the University of Pennsylvania in the US in August 2017.

A chordoma tumour was diagnosed inside Pernikoff’s neck, which was discovered after his accident in 2016. Chordoma is a rare type of cancer that occurs in the bones of the skull base and spine, and grows slowly, due to which it might not show any symptoms for years.  After Pernikoff’s accident, doctors revealed a lesion in his neck, on the cervical spine.

The neurosurgeons initially went through the back of Pernikoff’s neck and cut the spine around a tumour to then extract a tumour through Pernikoff’s mouth. After recovering from the accident, a biopsy of the injured spot revealed the presence of a chordoma tumour.

Pernikoff said, “The doctor said if I hadn’t discovered it through the car accident it probably would have kept growing until it came to a point on my spinal cord where it caused paralysis or death,” as reported by PTI.

The team of surgeons was led by an Indian-origin doctor named Neil Malhotra. Malhotra and his team decided to extract the tumour through a complex spinal surgery approach by using the trans-oral robotic (TORS) machinery for the second phase of the surgery.

News agency PTI reported that “TORS is the world’s first group of minimally invasive robotic surgery techniques to remove benign and malignant tumours of the mouth and throat.”

Robots in hospitals are gaining popularity as they help reduce human error and have the ability to reach sensitive areas within the body.

In 2016, doctors in the United Kingdom used a robot to perform an operation inside a patient’s eye. In the operation, surgeons were required to remove a membrane that was 100th of a millimetre thick from the patient’s retina. A joystick and touchscreen outside the eye was used to control the robot.

Doctors also used robots to remove kidney cancer that extended to the heart at the University of Southern California Keck School of Medicine last year. The entire procedure lasted for roughly 10 hours and involved three renowned surgeons, a critical care anesthesiologist and a radiologist. The use of robotic surgery equipment reduced trauma for the patient, and also minimised blood loss.

As robots and human doctors combine to do the unthinkable, the future for medicine and science is surely looking up. With the advent of technology, hospitals can increase the use of robotics and artificial intelligence to perform complex surgeries.