We should deal with electronic waste responsibly. Here’s how

The unscientific disposal of e-waste results in the contamination of fragile eco-systems, which exacerbate the impact of climate change by reducing the ability of the environment to counter rising temperatures and other concomitant changes. 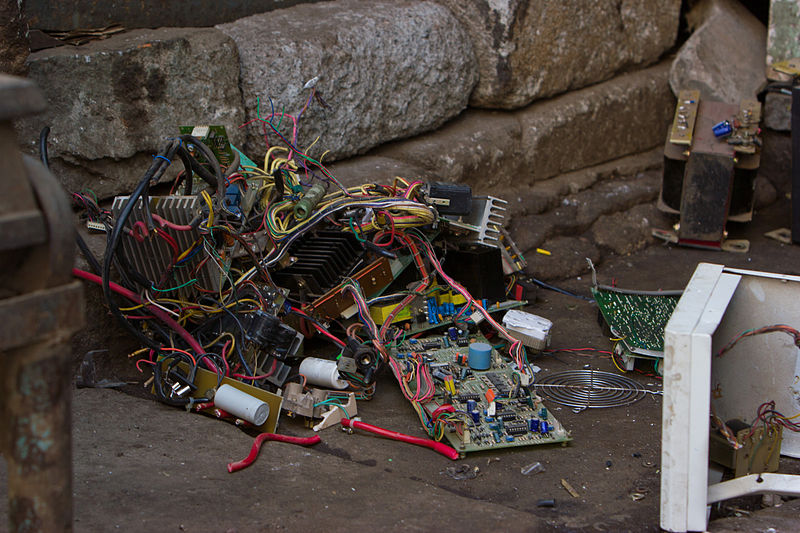 Electronic waste, or e-waste, is an oft ignored aspect of managing the environmental impact of our bid to become technologically supreme. Unfortunately, our current e-waste management rules are a straitjacketed and limited policy tool when we actually need flexibility.

Why think of e-waste?

Improper disposal of e-waste is a health hazard because electronic components that are discarded are often composed of toxic elements. Once released into the atmosphere, these toxins leach into the soil, which affects its fertility, and pollute groundwater. In addition, employing inefficient decomposition techniques results in indiscriminate emission of greenhouse gases, whose concentration rises with increase in percentage of e-waste.

Untreated e-waste (50 million tons globally) has the potential to account for 4.25% of the world’s emissions. The United Nations Framework Convention on Climate Change estimates it to be over 1900 metric tons of carbon dioxide equivalent (MTCO2e). If India were to dump all 2 million tons of its e-waste, it would result in 77 MTCO2e and would account for roughly 2 percent of the nation’s total emissions.

In light of this dismal situation, it is pertinent to take stock of our e-waste management policies. An important feature of the E-Waste Management Rules (2011 and 2016) is the focus on entrusting tangible responsibility of generation of e-waste on producers of electronic goods via the Extended Producer Responsibility (EPR) mechanism. The objective of EPR is to incentivise producers to absorb the cost associated with the disposal of a good at the end of its life cycle by integrating it into the manufacturing costs. This would enable us to get the benefits of circular economy, a concept that aims at extending the lifespan of goods produced by encouraging longer use of the good and use of second hand inputs.

The 2016 legislation mandated that producers should re-collect a certain percentage of goods from the total quantity generated for scientific reuse/recycling. However, there were subsequent downward revisions of the targets by Central Pollution Control Board (CPCB) in 2018, citing a lack of financial and logistic capability of producers to meet them. This is symptomatic of teething troubles in the e-waste management scheme. EPR schemes are also prone to non-compliance by producers.

Looking to the future

There is thus a need for implicit financial incentives within the scheme. An effective EPR set-up should entrust financial responsibility on producers with the provision for complementary incentives in order to encourage them to meet their targets. There is a need for financial incentives particularly in the current scenario of fast replacement of products with newer versions with slight variations, thus reducing their lifetime usage and increasing time spent at landfills.

In addition, there should be a certain degree of flexibility with respect to quantitative targets, given that the marginal costs of abatement are not entirely known to the government. There is a need for a pricing scheme through which an implicit price can be attached to electronic waste. This is where a credit trading scheme, based on the concept of carbon credit trading, might prove to be useful. Let us now delve into the mechanics of the scheme. Let the government set the target for every producer to collect 10% of the quantity of waste generation as indicated in the EPR Plan. We assume 1 credit to be equal to 1 kg of e-waste. If Firm 1 generates 100 kg of e-waste, then its target is 10 kg, and that for Firm 2, generating 200 kg of e-waste, would be 20 kg. We assume that Firm 1 is in a position to collect 20% of its e-waste, that is, 20 kg of e-waste. Firm 2, on the other hand, can only collect 10 kg of e-waste. Firm 1 in such a situation can collect 20 kg of e-waste, earn 20 credits, and subsequently sell the surplus credits to Firm 2. Through this mechanism, the industry target of 30 kg of e-waste will be satisfied. The price of credit, arrived via the market, would be the implicit price. This will also encourage the producers who face low costs of collection and recycling to invest more in developing low-cost abatement technologies.

There are a few conditions that must be met within this proposed scheme. First, the price of the credit should be less than the cost of collection of e-waste. Second, the price of the credit should also be less than the fine imposed by the overseeing authority in case of violation of collection targets. Third, the existence of firms who are willing to and able to achieve more than the said target is imperative. Fourth, it is important to ensure that the smaller firms do not systematically face higher collection costs as it will drive them out of business. The current rules pre-empt this by temporarily excluding MSMEs. Finally, going forward, the mechanism for allocation of credits and setting of quantitative targets needs to be done scientifically, for it has socio-economic consequences for those involved.

Another financial incentive that is built within the current policy but is not operational at a nationwide scale is that of Waste Exchange. Such an exchange can act as a platform which gives producers of electronic waste to sell the collected e-waste to buyers who are in need of these devices. This will result in reuse of electronic products. At present, this happens in the informal sector. The sellers of these products, which would include the producers of electronic goods, would have an opportunity to recover a part of the cost of collection of e-waste. At present, a private e-waste exchange company called Sanshodhan is operational in India. As per their business model, the sellers on the forum quote a bid for their goods. The platform then collects these from the sellers and delivers the good to the recycling centre. A feature wherein there is an option to buy these goods directly from the sellers can be added to this platform and other similar platforms.

Unscientific disposals results in the contamination of fragile eco-systems, which exacerbate the impact of climate change by reducing the ability of the environment to counter rising temperatures and other concomitant changes. To mitigate this, we need a financially viable system that is a blend of hard quantitative targets and flexibility.

Srishti Singh is a research assistant at the Centre for Development Economics, Delhi School of Economics.