Murmu took 60 per cent of the total vote value in the Presidential Elections, for a convincing victory. Opposition’s Yashwant Sinha conceded defeat after three rounds of counting. 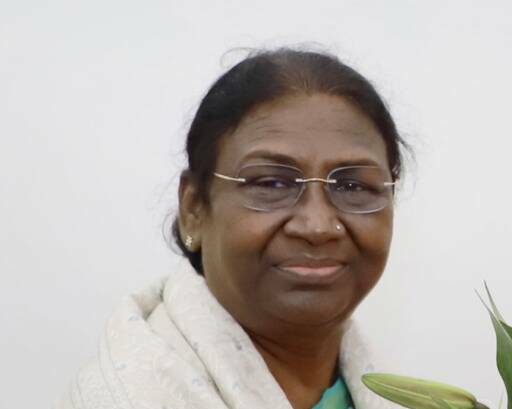 Droupadi Murmu took the oath as India’s 15th President on Monday. The ceremony was held at the central hall of Parliament at 10:15 am on Monday, as Chief Justice of India NV Ramana administered the oath of the office of the President to her.

In her first address after taking oath, President Murmu said the country’s deprived, poor, Dalits and tribals can see their reflection in her which, she added, is a matter of big satisfaction for her. She also paid tributes to India’s freedom fighters and said the country will have to move quickly on the twin tracks of ‘sabka prayas‘ (everyone’s effort) and ‘sabka kartavya’ (every one’s duty) to fulfill their expectations.

‘My election is proof of the fact that in India, the poor can dream and also fulfil those dreams’ President Murmu said in her address to the country.

‘It is the power of India’s democracy that a girl born in a poor tribal home could reach the topmost constitutional post. My nomination has blessings of the poor behind it, it’s a reflection of the dreams and capabilities of crores of women.‘

‘I started my life journey from a small tribal village in Odisha. From the background I came from, it was like a dream for me to get elementary education. But despite many obstacles, my resolved remained strong and I became the first daughter of my village to go to college. I belong to the tribal society, and I have got the opportunity to become the President from the Ward Councillor. This is the greatness of India, the mother of democracy,’ she added in an inspirational address.

Celebrations broke out across the country earlier, as Droupadi Murmu got 64.03 per cent of total vote value after three rounds of counting in the Presidential Elections, to register a resounding victory over Opposition candidate Yashwant Sinha.

At 64, Ms Murmu will be the youngest and India’s first President to be born after Independence.

‘Smt. Droupadi Murmu Ji has been an outstanding MLA and Minister. She had an excellent tenure as Jharkhand Governor. I am certain she will be an outstanding President who will lead from the front and strengthen India’s development journey,’ PM Modi tweeted.

‘I heartily congratulate Srimati Droupadi Murmu on her victory in the Presidential Election 2022. I hope — indeed, every Indian hopes — that as the 15th President of India she functions as the Custodian of the Constitution without fear or favour. I join my fellow countrymen in extending best wishes to her,’ read a statement from Opposition candidate Yashwant Sinha.

The winner of the Presidential election needs to get the most number of votes, but also cross a quota, by adding votes polled for each candidate, of more than 50 per cent.

The voting figures also indicate a considerable amount of cross-voting by opposition MPs and MLAs, as there is not whip assigned for the Presidential polls.

While parties have declared support for one candidate or the other, there is no penalty for cross-voting in the Presidential elections, which can swing the vote either way at the hustings.

This article has been updated.