Just hours before the Sabarimala Temple reopened on Monday, the Kerala High Court issued a notice asking the state government not to interfere with the temple’s day-to-day activities or stop devotees and media from approaching the temple. After protests broke out again, reportedly due to the heavy deployment of police personnel at Sabarimala, the court further ordered for a departmental enquiry against those responsible for damage of property and vehicles of devotees. 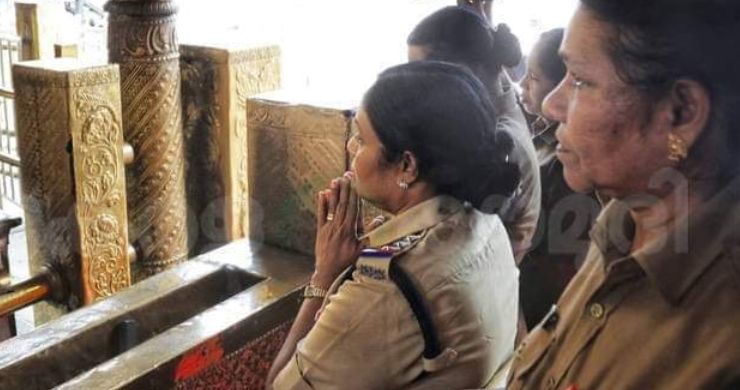 Women cops over the age of 50 pray at Sabarimala before beginning their day as part of the beefed-up security. Credits: Twitter/@LillyMaryPinto

Just hours before the Sabarimala Temple reopened on Monday, the Kerala High Court issued a notice asking the state government not to interfere with the temple’s day-to-day activities or stop devotees and media from approaching the temple. After protests broke out again, reportedly due to the heavy deployment of police personnel at Sabarimala, the court further ordered for a departmental enquiry against those responsible for damage of property and vehicles of devotees.

Last week, the state government declared Section 144 prohibiting unlawful assembly at the shrine to avoid the recurrence of mob violence which prevented women from entering Lord Ayappa’s shrine in October. This time, the state deployed more than 2,000 police personnel across Sabarimala, Pamba, Nilakkal, Erumeli and Elavunkal since Sunday, as the temple reopened for a special ceremony Monday evening.

Leading the offensive against systemic efforts to make a mockery of the SC verdict is Chief Minister Pinarayi Vijayan who said that his government has a constitutional obligation to implement it, and that he will not entertain a review petition against it.

The odious politics and perfidious ways of BJP stand exposed. Evidence has surfaced that BJP leaders in the State connived to create trouble in Sabarimala. It must be noted that their State president himself was involved in the ruse. This is highly condemnable.

Meanwhile, the BJP and the Congress have criticised the state government for the heavy fortification of the temple town, stating that it would destroy the sanctity of the pilgrim spot, and curb free movement of the devotees and pilgrims. Several Hindu outfits, particularly the RSS-backed Sabarimala Karma Samithi, even warned media houses not to depute female journalists to cover the issue, claiming that it could “aggravate” an already “emotional” situation.

However, amidst tight security, temple gates opened for both men and women at 5PM Monday, and Nilakkal basecamp-in-charge Manjunath H told ANI that the police were authorised to check vehicles randomly to weed out potential troublemakers and subject incoming devotees to a three-tier-checking, but they were not obstructing the movement of devotees. No women of the barred age group were seen entering the sanctum sanctorum as the pilgrims marched on to participate in the Athazha puja on Tuesday. At 10:30 PM, a 26-year old woman reportedly got the nod to enter start the trek uphill, despite growing protest from other devotees.

Here’s what happened so far

When the Supreme Court liften the ban on the entry of women of childbearing age, the temple board and several religious outfits took to the streets, protesting against the overhaul of a century-old tradition.

When the temple opened its gates between October 17-22 – for the first time since the ruling – members of the Sabarimala Karma Samithi, supported by 50 other Hindu outfits heckled and abused 15 women including journalists who attempted to enter the temple, and even attacked journalists. They flagged down cars carrying women and forced them to turn back. Law and enforcement failed the handful of women who made it past the mob to undertake the trek from Nilakklal to the hilltop shrine. Not a single female devotee or journalist has made it past the fiery mob so far.

The police have, so far, arrested 3,505 protestors for intimidating and attacking women who legally arrived at the shrine to offer their prayers and make history. Shortly afterward, the Bharatiya Janata Party (BJP) called for a state-wide shutdown last Friday citing atrocities against Sabarimala devotees with party chief Amit Shah throwing in support for the protestors who upheld the shrine’s age-old traditions with intimidation and a flagrant obstruction of justice.

For the BJP, Sabarimala is not a place of worship but a battleground https://t.co/awTPsnDMzP pic.twitter.com/JcSFqj08FB