Why Donald Trump Jr.’s trip may be too much for India

The son of the U.S. president, is on a business trip to a key U.S. partner, is taking time out from selling access to himself to deliver a foreign-policy speech. 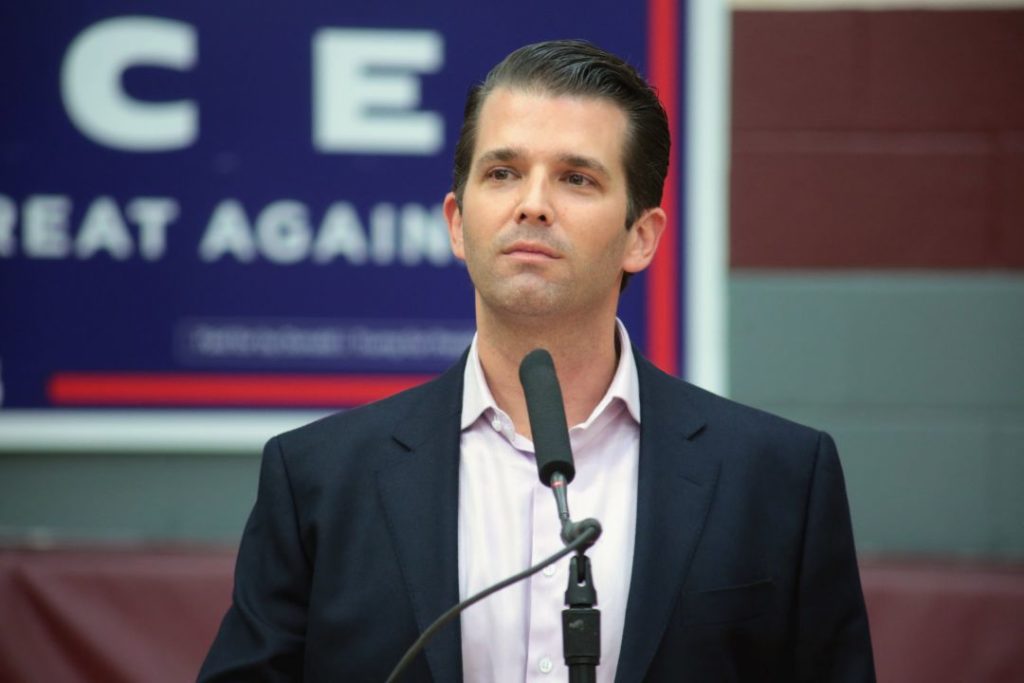 If you lived in one of India’s largest cities, a startling sight would’ve greeted you when you picked up your morning newspaper last Monday: Whole front pages had been replaced by an artists’ impression of a skyscraper. There was to be a Trump tower in your town, the ads declared — something you might have already gleaned from the photograph of Donald Trump Jr. that accompanied the advertisement, and perhaps from the fact that the skyscraper in question appeared to be entirely gold-plated.

The advertisement also promised that anyone putting down $38,000 towards an apartment in that Trump tower would get to have dinner with the U.S. president’s son, who is visiting India this week. “Trump is here — are you invited?” the ads teased, though language purists might suppose that a dinner open to anyone who pays $38,000 involves tickets rather than invitations.

Trump Jr. is also speaking on Friday at the “Global Business Summit” organized by India’s largest business newspaper, billed immediately below Indian Prime Minister Narendra Modi. He’s supposed to talk about a “new era of cooperation” in “the Indo-Pacific” — the American government’s new term of art for an Asia that doesn’t revolve entirely around China. In other words, the son of the U.S. president, on a business trip to a key U.S. partner, is taking time out from selling access to himself to deliver a foreign-policy speech that, in fact, the U.S. government has admitted it knows nothing about.

Even in India, a country where scandals and scams can be breathtaking in their scope, I struggle to recall anyone doing anything quite so brazen. At the same time, many in India would expect nothing less from property developers like the Trumps. Perhaps there are Americans who think that real estate is a business like any other; in India we know that buying land and putting up buildings requires a very particular sort of intimacy with the government.

Indian real-estate regulations are Kafkaesque in their complexity. In fact, they are often so complicated and restrictive that only those with the ability to lobby the government can get anything built at all.

Consider Mumbai, the densely crowded island city that serves as India’s financial capital. Till 2015, the law stated that the maximum “floor space index” for any construction on the island was 1.33, which meant even double-storied buildings should have been rare.

Yet look at Mumbai’s skyline, pierced by enough skyscrapers to satisfy anyone not named Trump. How did that happen? Well, 25 “exceptions” were built into the rule, and discretion was granted to politicians and bureaucrats to suspend the norms for particular projects. Every single building in downtown Mumbai that’s been built in the past quarter-century has, therefore, required special permission from one politician or another. Is it any surprise that Indians have a fairly jaundiced view of the relationship between builders and politics?

Perhaps that helps explain why India has become the Trumps’ largest overseas market, and why they’ve lent their name to five different buildings here. We don’t expect much from our politicians and we expect even less from our real-estate moguls.

India, however, is at least trying to fix this problem. Modi has worked hard to ensure that his administration is perceived as corruption-free; he’s almost paranoid about being seen as too close to businessmen. (A photograph of him at Davos with jeweler-to-the-stars Nirav Modi, now caught up in a $1.8 billion bank scandal, has caused the prime minister — no relation — no end of headaches.)

Modi knows that the reputation of India’s leading political family, the Nehru-Gandhis, has never recovered from reports that the current Congress president’s brother-in-law made a great deal of money in some pretty shady real-estate transactions. And although there remains a long, long way to go, a start has been made on cleaning up India’s debt-ridden and corrupt property market.

Trump Jr. and his ethics-free royal progress thus stand out even in today’s India; it may be completely out of step with tomorrow’s. It’s a pity that the U.S. appears to be heading in quite the opposite direction. As one moderately successful real-estate developer would say: Sad!