Vaccination and subsequent elimination should have been a no-brainer. Yet local and regional outbreaks persisted across the 19th century, as citizens exercised their rights not to act. 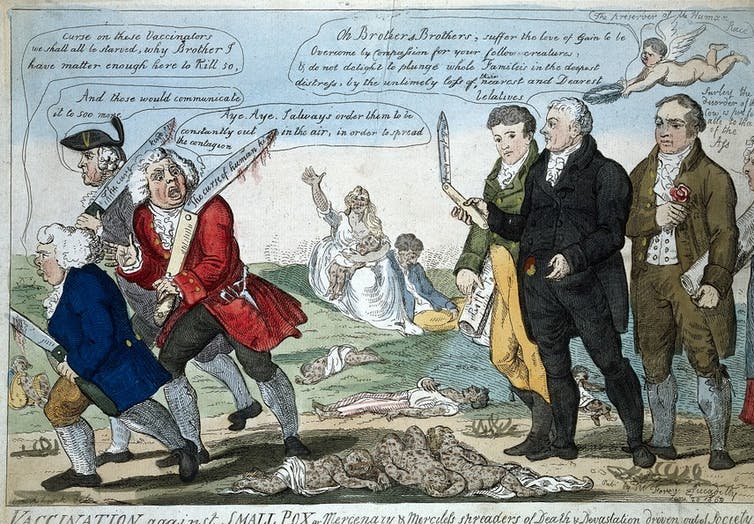 English physician and scientist, who was the pioneer of smallpox vaccine, Edward Jenner sees off the anti-vaccinators.Wikimedia/Wellcome Collection

There is hope a coronavirus vaccine might be ready by the end of the year. But for it to eliminate COVID-19 a critical mass of people must be vaccinated. And if the protective benefits of a COVID-19 vaccine fall off rapidly (as seems to happen with naturally acquired antibodies) maintaining immunity will require multiple vaccinations. So unless people keep renewing their jabs, the critical mass will decline quickly.

How will politicians ensure critical mass and renewal? For UK prime minister Boris Johnson (who labels those who oppose vaccination as “nuts”) and others, vaccination is a matter of duty. There is a logical case (we know people who have died or suffered badly from COVID-19) and a moral case (to protect others if not yourself).

Yet anti-vaccination sentiment focused on the rights of citizens not to act is clear. A recent poll of 2,000 people across the UK found that 14% would refuse to take a vaccine.

The rights of citizens not to act mean that compulsory vaccination cannot be (and has not been) ruled out. The history of other vaccination programmes, particularly the first truly national campaign against smallpox, shows how difficult the balancing of rights and duties will be.

The 19th-century invention of vaccination created a new national imperative for the UK to combat endemic smallpox. The risk of dying from smallpox for those who contracted it was substantially higher than that for COVID-19 today. Survivors gained immunity but often at the cost of physical scarring and long-term health problems.

Vaccination and subsequent elimination should have been a no-brainer. Yet local and regional outbreaks persisted across the 19th century.

Governments of this period assumed (sometimes incorrectly) that the middle-classes would realise the value of vaccination. The poor and marginal were different. For them, mass compulsory vaccination awaited.

The result was an explosive atmosphere. Rumours of deaths after vaccination and of the rounding up of the poor like animals generated a sustained popular backlash, with some organising under the umbrella of the National Anti-Vaccination League.

Yet even after vaccination became compulsory in 1853, there were many ways in which, by accident or design, ordinary people citizens avoided the jab. Some people simply disappeared from the records or failed to appear when asked. Those most prone to doing so (those in crowded households or immigrants, for example) were also the groups most susceptible to disease.

Census data consistently undercounts the national population. Undercounting in the 1800s may have missed around 10% of some communities. Even for the 2011 census, around 6.1% of the population is believed to have been missed. Achieving vaccination critical mass is difficult where you do not know the true size of the mass and the most vulnerable are the least detectable.

The poor also “clogged up” the vaccination system. Sometimes they agreed to participate and then did not turn up, a common feature for systems of compulsion where there is no ultimate sanction. On other occasions, as for instance at Keighley in 1882, people would supplement this activity with the sending of anonymous hate mail in an attempt to disrupt the work of local vaccinators.

Fight for their rights

Taking advantage of local tensions was also a useful avoidance technique. “Smallpox riots” in the face of attempts at crude compulsion were frequent and sustained.

Sometimes organised by local agitators, and sometimes spurred on by instances of children dying after vaccination, such unrest varied on a spectrum from small and localised to community-wide and sustained. Riots at Ipswich, Henley, Leicester and Newcastle were particularly notable.

Nor should we forget that vaccination opponents spread rumours about and caricatured vaccines and vaccinators, undermining the credibility of the system in the public imagination. These included one cartoon from the 1880s in which helpless children are shovelled into the mouth of a diseased cow while, at the other end, a doctor portrayed as the devil incarnate shovels dead children excreted by the cow into a cart bound for mass graves.

In July 2020 public figures stand accused of using Twitter to the same effect for COVID-19 vaccination.

Most forcefully, while politicians used the law in order to force vaccination, the law could also be turned against them. Penalties against parents for failing to vaccinate children, introduced in 1853 and strengthened in 1867, were routinely ignored by courts. Compulsory child vaccination was removed in 1898 and the freedom to refuse introduced.

Long-standing opposition to vaccination by some scientists as well as ordinary people crystallised in 1885 with a huge demonstration at Leicester (ironically the recent focus of a British local lockdown). This and ongoing smaller protests across the country forced the government to introduce a Royal Commission to reflect on the whole question of compulsion. The verdict ultimately fell on the side of the rights of the individual.

It is not hard to imagine the 2021 human rights case in which a court must decide on the balance of the legal and collective duty of citizens to get vaccinated against COVID-19 nd the individual right to choose.

Our political and medical elites believe that people will accept moral responsibility: “get vaccinated”. Yet little thought has gone into how a mass vaccination programme works.