Residents, activists, and environmentalists got together to protest against the Delhi government’s decision to cut more than 14,000 trees for the redevelopment of seven south Delhi colonies. 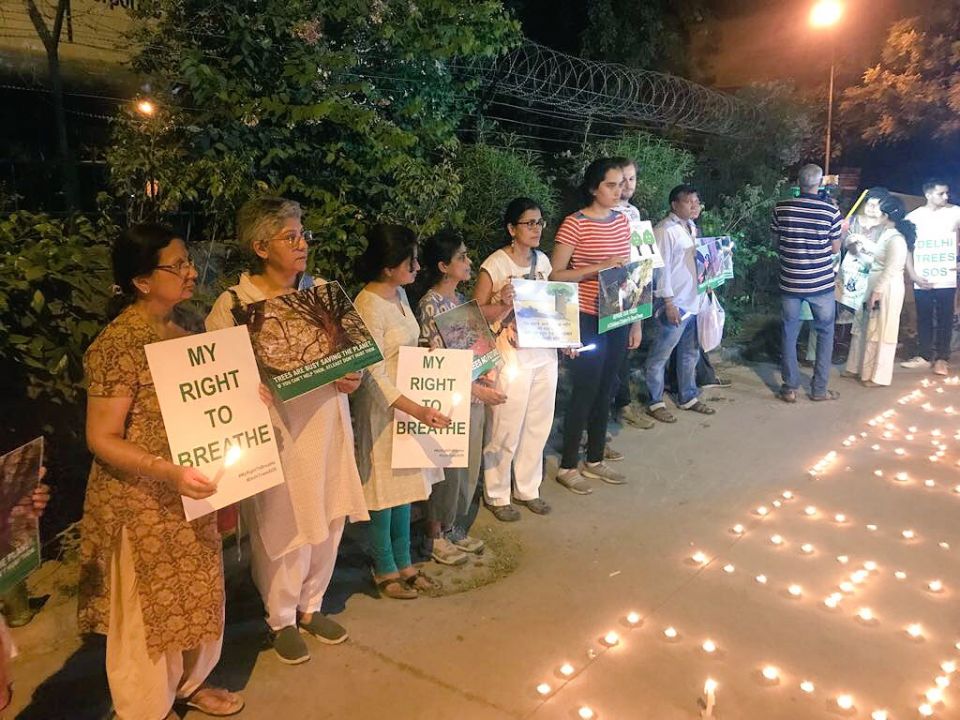 Residents of Sarojini Nagar held a vigil to protest against the government's decision to cut over 16,000 trees. Credit: Twitter/@dhruv_rathee

New Delhi’s Sarojini Nagar witnessed its own Chipko Movement as residents, activists, and environmentalists got together on Sunday to protest against the government’s decision to cut more than 14,000 trees for the redevelopment of seven South Delhi colonies.

Around 250 residents of all ages along with environmentalists gathered around Sarojini Nagar police station standing with placards portraying messages such as “We don’t want a deserted Delhi”, “Ban tree felling in Delhi”, “Where is Delhi Tree Act” and “Even 1,000 new saplings can’t compensate one well-grown tree”.

The protesters tied green ribbons, symbolising a raakhi, around trees, indicating that they promise to protect trees. To create awareness through social media, a velfie (video selfie) booth was also set up.

According to a PTI report, the Forest department has permitted the cutting of at least 14,000 full-grown trees in order to clear the path for the redevelopment of residential facilities for government employees. The report cited a government statement and alleged that in Sarojini Nagar, a total of 8,322 trees will be cut while in Nauroji Nagar, 1,465 were expected to be chopped.

The report further mentioned that 2,315 trees would be cut in Netaji Nagar, whereas Mohammadpur would see the destruction of 562 trees. Kastruba Nagar, Sriniwaspuri, and Tyagraj Nagar might see 723, 750, and 93 trees cut, respectively.

Verhaen Khanna, an environment activist and one of the organisers, told Hindustan Times, “We would not allow the trees to be felled. Just like the Chipko movement, we would hug the trees if anyone comes to cut them.”

Delhi’s Aam Aadmi Party (AAP) lent its support to the protest as party spokesperson and state environment and forest minister Imran Hussain took part in the protest. The issue has led to a blame game between the Centre and the state. Union natural gas minister Harsh Vardhan blamed the AAP government for permitting the cutting of trees in non-forest areas. However, AAP claimed that the clearance came from the Ministry of Environment and Forest, which was headed by Vardhan in November 2017.