Was the character of Sherlock Holmes based on a real person?

Readers have always wanted to know the basis for Sherlock Holmes. Doyle couldn’t have conceived this eccentric, brilliant character out of thin air, right? Sue T. asks: My sister told me Sherlock Holmes was based on a real person. Is this true? 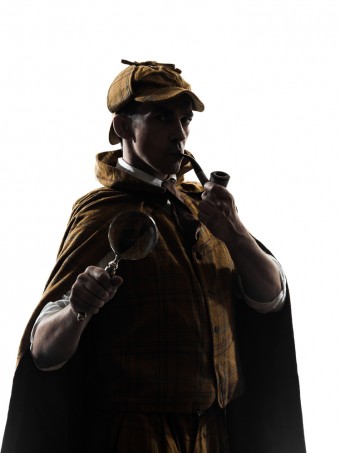 In 1887, Doyle published the novel “A Study in Scarlet.” It was the first work to star Sherlock Holmes and Dr. Watson. It was also the first record of a magnifying glass being used as a tool of investigation. “A Study in Scarlet” didn’t attract much attention (and neither did its sequel, “The Sign of Four.”) but in the July 1891 issue of “The Strand Magazine”, Doyle published the first short story starring Holmes. That’s when the detective began to take off in popularity. Even early on, readers wanted to know who was the basis for this new type of crime fighter.  Doyle couldn’t have just conceived  this eccentric, brilliant, logical character out of thin air, right? After more than a century since Sherlock Holmes made his first appearance on paper,  evidence points to Holmes being based on primarily two individuals, as well as, perhaps, the author himself.

At the young and impressionable age of 18, Doyle was studying to be a physician at the University of Edinburgh in 1877. It was a professor by the name of Joseph Bell that drew Doyle’s attention immediately. Dr. Bell’s lectures were bombastic, entertaining, and fascinating. Using his amazing deductive abilities, Dr. Bell would make immediate conclusions about his patients that were often spot-on.

According to Doyle himself, as written in his autobiography, Bell’s “strong point was diagnosis, of not only disease, but of occupation and character.” In a famous example, also accounted in Doyle’s autobiography, a man stepped forward to Bell without giving any information about himself. After a good eying over, Bell gave this conclusion about the man he’d never met before:

Well, my man, you’ve served in the army… Not long discharged… A Highland regiment… A non-com officer… Stationed at Barbados…

Bell was correct on all points.  He explained how he did it as follows,

You see, gentlemen, the man was a respectful man but did not remove his hat. They do not in the army, but he would have learned civilian ways had he been long discharged. He has an air of authority and he is Scottish. As to Barbados, his complaint [why he was visiting the doctor] is elephantiasis, which is West Indian, not British, and the Scottish regiments are at present in that particular island.

Conan Doyle said of such displays of Bell’s, “To his audience of Watsons, it all seemed very miraculous until it was explained, and then it became simple enough.”

During Doyle’s second year, Bell “singled” him out and made him his outpatient clerk, which meant he took basic notes of the patients who came in and presented them to Bell. Essentially, he became Bell’s Watson. Ten years later, when Doyle put pen to paper, this unique and wildly fascinating skill-set, to take trivialities and turn them into broader accurate conclusions, embodied itself in Sherlock Holmes.

Doyle freely admitted this. In an interview later in life, according to the biography “Teller of Tales: The Life of Arthur Conan Doyle,” Doyle exclaimed, “Sherlock Holmes is the literary embodiment, if I may so express it, of my memory of a professor of medicine at Edinburgh University.” Further, in a letter to Bell, Doyle told him, “It is most certainly you I owe Sherlock Holmes.”

While there were major elements of Dr. Joseph Bell in Sherlock Holmes, he wasn’t the only inspiration. The famed Edinburgh native forensic scientist, public health inspector, and dissector of human bodies, Henry Littlejohn is also credited for giving Holmes some of his personality. Littlejohn was prominently involved in the investigations of any accident, tragic death, or murder that took place in Edinburgh in that day. Helping pioneer the use of fingerprinting and photographic evidence in criminal investigations, Littlejohn was revolutionizing the way cases were cracked right when Doyle was conceiving Holmes in the 1880s and 1890s.

During the time Doyle was writing “The Final Problem” in 1893, the Ardlamont murder trial was taking place. Alfred John Monson was accused of shooting his twenty year old student, Cecil Hambrough, during a hunting trip. The defense claimed that Hambrough had “accidentally” shot himself in the head. According to the Edinburgh News, Littlejohn testified that the position of the wound, the scorch marks from the bullet, the damage to the victim’s skull, and even the smell of the victim indicated the contrary, that this was murder.

Interestingly enough, Dr. Bell was brought in as an expert witness and using his considerable deductive powers ultimately agreed with Littlejohn. In the end, the jury came back with a verdict of not guilty, but Doyle used this trial and the forensic science of Henry Littlejohn as inspiration for a part of the character of Sherlock Holmes.

And finally we have Doyle himself.  Bell once wrote a letter to Doyle stating, “You are yourself Sherlock Holmes and well you know it.”  To illustrate, in December 1908, Marion Gilchrist was beaten to death during an armed robbery. A Jewish German immigrant was accused and then convicted of the crime. In 1909, he was sentenced to death. The following year, Scottish lawyer William Roughead wrote “The Trial of Oscar Slater,” where he laid out the case that Slater was innocent.

In 1912, in hopes of getting Slater a retrial and acquitted, Arthur Conan Doyle wrote his own synopsis “The Case of Oscar Slater,” in over a hundred pages painstakingly highlighting details and circumstances that proved Slater’s innocence, not the least of which was that the hammer found in Slater’s trunk, thought to be the murder weapon, was “an extremely light and fragile instrument, and utterly incapable in the eyes of commonsense of inflicting those terrific injuries which had shattered the old lady’s skull.”

Of course, something of a “chicken and the egg,” it is not entirely clear if Sherlock Holmes inspired Doyle’s own sleuthing or Doyle’s deductive abilities and passion for the subject helped inspired Holmes. Either way, thanks in part to Doyle, Oscar Slater was acquitted and freed in 1928.

As for the name, “Sherlock Holmes” it is thought to have been taken from two sources – “Holmes” from the prominent, and fellow doctor, Oliver Wendell Holmes and “Sherlock” from Doyle’s favorite musician, Alfred Sherlock.

If you liked this article, you might also enjoy subscribing to our new Daily Knowledge YouTube channel, as well as: