Boris Johnson wins no-confidence vote, what does it mean for the Conservative Party

Johnson actually performed worse than John Major and Theresa May in their leadership challenges in 1995 and 2019. And he faced as much opposition as Margaret Thatcher did in the first round of her leadership contest in 1990. 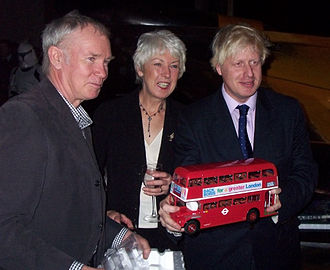 Boris Johnson holding a model red double decker bus, with two other people. A campaign slogan on the bus reads "Back Boris for a greater London" Wikimedia Commons

The verdict is in. Boris Johnson retains the confidence of the Conservative Party. For now. Johnson received the votes of 211 out of 359 Tory MPs in support of his leadership, which means that technically he won. But the fact that 148 of his parliamentary colleagues voted against him, more than 41% of the parliamentary party, throws his longevity as party leader – and prime minister – into considerable doubt.

Johnson actually performed worse than John Major and Theresa May in their leadership challenges in 1995 and 2019. And he faced as much opposition as Margaret Thatcher did in the first round of her leadership contest in 1990.

The history of such confidence votes in Conservative leaders tells us that they almost always end up damaging both the leader and the party even when they support the incumbent. We have seen this happening on three successive occasions over the past 32 years.

When senior cabinet minister Michael Heseltine challenged Thatcher’s leadership in the first round of the contest in 1990 he took 40.9% of the vote. This meant that under the rules operating at the time, the contest had to go to a second round because she did not achieve the 55% required for an outright victory. Initially she said she would fight on but subsequently the “men in grey suits” persuaded her to stand down, and the resulting contest was won by John Major.

In retrospect, Conservative MPs were right to replace her, since Major then went on to win a surprise victory in the 1992 general election. But subsequently he too was increasingly dogged by the divisions in the party over UK membership of the European Union. Major was a firm supporter of Britain’s membership of the European Union – but an increasing number of Tory backbenchers, as well as party members in the country, wanted to leave the EU.

Major decided to make his critics “put up or shut up” by calling for a confidence vote in himself in 1995. He won that vote by a large margin, supported by 71% of his parliamentary colleagues – but unfortunately for him, this did not settle the issue. If anything, it revealed to the voters that the Conservative Party was bitterly divided. Two years later under the leadership of Tony Blair, Labour won a landslide victory in the election which brought an end to Major’s premiership.

The third occasion was the confidence vote imposed by May in the spring of 2019 following her failure to win a parliamentary majority in the general election of 2017. She did better than expected by winning the backing of 63% of her MPs, but unfortunately for her it did not solve the problem of finding a solution to Brexit acceptable to the House of Commons. Despite the victory, within six months she had to resign and Johnson won the subsequent leadership election.

These examples show that a confidence vote itself inevitably weakens rather than strengthens the position of the leader and this erodes support for the party among the voters. Two by-elections are shortly to take place in Wakefield and in Honiton and Tiverton – both seats won by the Conservatives in the last election. Recent polling suggests that Wakefield is almost certain to be captured by Labour and, in light of the Liberal Democrat success in the by-elections in North Shropshire and Chesham and Amersham in 2021, the party has a very good chance of taking this seat from the Conservatives. https://www.youtube.com/embed/ktLemiX9zUk?wmode=transparent&start=0

This does not of course mean that Johnson will resign. Former Brexit Secretary David Davis, himself a former Conservative leadership candidate, said the prime minister will have to be “dragged kicking and screaming” from Downing Street. If this is indeed the case, it means that, unless his colleagues can remove him from office, the row over partygate will continue and the ability of the government to persuade people to support it to deal with the cost of living crisis and other major issues will be further eroded.

In dealing with this issue, Conservative MPs might do well to remember the advice given by Machiavelli in The Prince – his manual for how to govern states:

Whoever is responsible for another’s becoming powerful ruins himself, because this power is brought into being either by ingenuity or by force, and both of these are suspect to the one who has become powerful.

A significantly weakened prime minister and a rebellious parliamentary party is no great foundation for achieving a fifth election victory in 2024.