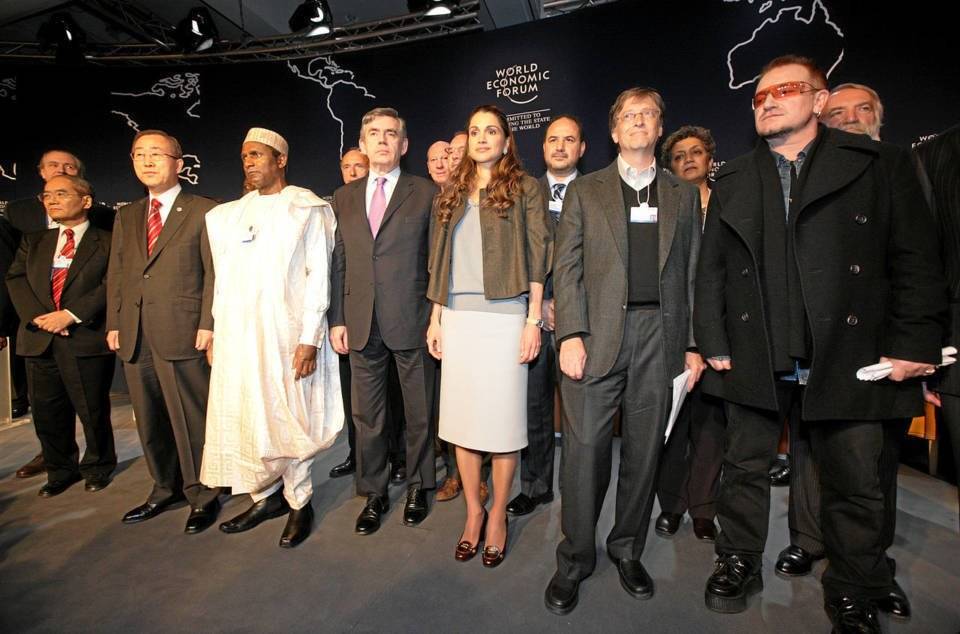 Many people would consider Bill Gates’ announcement that he is stepping down from the board of directors of Microsoft a historical event, even in these times dominated by the coronavirus crisis that has squeezed most other stories out of the news cycle. Gates became a legend as the founder of Microsoft. His name is synonymous with the brand that has dominated the personal computer technology landscape for 40 years.

The BBC reports that Gates and his wife, Melinda, “were named the most generous philanthropists in the US in 2018 by … The Chronicle of Philanthropy, after giving $4.8bn to their foundation the previous year.”

An attribute reserved for very rich people who can impress the media and the poverty-stricken public by giving away massive amounts of money that in no way diminishes the much more massive amount of wealth they possess. This turns out to be a very painless way of qualifying such persons for secular sainthood, free of the traditional obligation to practice some spectacular form of personal asceticism and penitence.

As Steven Levy, writing for Wired, observes, over the past 20 years, Gates has been progressively moving away from his vocation as an aggressive monopolist — skilled at using his clout to suppress competition — that for decades elevated him to the status of the world’s richest person, though occasionally overtaken by one or two other luminaries (Jeff Bezos currently holds the title).

Long ago, Gates grew wearied of a lifestyle that implied waking up every morning to think of clever ways to neutralize competitors and go to battle with trust-busting prosecutors in favor of a type of activity that he finds far more soothing to his moral conscience as well as flattering to his ego. Coaxed by Warren Buffett, Gates adopted philanthropy as his true calling, with a focus on health, education and poverty.

There does, however, seem to be a constant in his behavior as some people in the education and health sectors have noticed. Gates learned in his apprenticeship at Microsoft that his most valuable skill and cherished talent was knowing how to leverage his strength and throw his weight around to push things in his preferred direction, even if the experts in the field cast doubts upon his brilliant intuitions.

One example caused a lot of grief for professionals and experts for nearly a decade: the Obama government-sponsored Common Core. The Gates Foundation’s project of educational reform, inspired by Gates’ experience of developing management techniques at Microsoft, turned out to be a massive failure. It persisted, with considerable political support, even when seasoned educators and pedagogical thinkers warned against the nefarious effects of the ideology that drove Gates’ project as soon as it was announced.

According to a 2018 report by the think tank Rand, quoted by Business Insider, the Gates Foundation project, after considerable investment and nearly a decade of experimentation, “largely failed to help students.” University professor Jay Greene, writing for Education Next, lamented that the Gates Foundation wasn’t even capable of “learning from failure so that we avoid repeating the same mistakes.” Greene added that learning never took place during the experimentation which “failed pretty badly,” “cost a fortune” and “produced significant political turmoil and distracted from other, more promising efforts.” Instead, Business Insider cites Gates’ positive takeaway — that the program “led to ‘critical conversations’ and ‘drove change’ across the country.” The same could be said of the coronavirus today.

Beyond the disruption it caused for all people involved and for educational planning, Greene insists that the Gates Foundation’s program did “more harm than good with respect to student achievement and attainment outcomes.” That’s often what happens when someone with a lot of money and influence, accompanied by a steadfast belief in the truth of their intuition, insists on doing something that they see as being good, noble and generous.

Melissa De Witte, writing in a University of California Berkeley publication, summed up a truth that most people tend to neglect when they assess the good much of philanthropy is credited for. She explains that “big philanthropy is an exercise in power—the direction of the private assets of wealthy people toward some public influence. In a democratic society, wherever we see the exercise of power in a public setting, the response it deserves is not gratitude but scrutiny.”

Most high-profile billionaires direct their philanthropic contributions primarily to their own foundations, which usually bear their own names. AsThe Chronicle of Philanthropy pointed out two years ago, assessing the state of the giving at the time, Bill and Melinda Gates “claimed the Philanthropy 50 No. 1 spot for the fourth time, thanks to the $4.8 billion they donated to their foundation.” We also learn that “Mark Zuckerberg and Priscilla Chan … gave away $2 billion in 2017 to their charitable foundation” and that Michael and Susan Dell “donated $1 billion to their foundation.”

In some sense, gifts to their own foundations are simply gifts to themselves. It means that instead of their money only having an impact on the business and the commercial markets where they built their wealth through the accumulation of profit, they have found a way of harnessing the power of that wealth to influence not only other sectors of the economy, but also political decision-making.

Microsoft’s current CEO, Satya Nadella, who has successfully built the company into a trillion-dollar business, praised his former boss in these words: “Bill founded our company with a belief in the democratizing force of software and a passion to solve society’s most pressing challenges; and Microsoft and the world are better for it.”

Nadella might have gained in accuracy by pointing out that Microsoft under Gates also displayed a talent for making things worse for a number of smaller companies, including Microsoft partners. In the best cases, Microsoft simply restricted the freedom of companies it worked with. In others, it prevented them from developing. Some innovative companies were driven out of business because they dared to do things better than Microsoft. The company’s monumental growth was a consequence of using its clout to drive not only competing but also, in many cases, complementary products out of the market.Embed from Getty Images

In 1999, the French team of journalists Roberto Di Cosmo and Dominique Nora explored the full extent of Microsoft’s monopolistic practices. They pointed to the cases of numerous small entrepreneurs who stepped up in their own quest to realize the American dream by creating a successful software product compatible with Windows. The journalists wrote: “And then, one day, if their product works well, Microsoft purchases a license to use it, or just shamelessly copies it and integrates it into a new version of one of its products. According to some of these companies, Microsoft even goes as far as modifying its system so the original program will no longer work, or will work less efficiently than the Microsoft copy.”

But most importantly, Gates learned very quickly that mountains of money, irrespective of innovation, can do wonderful things. In 2012, PC Magazine described cases in which Microsoft “devoured or sued into oblivion” companies that were standing in the way of its obsession with protecting its monopoly. As the author of the article, Eric Griffith, said, “when Microsoft can’t win, it can afford to throw so much money at the problem that settling out of court still feels like winning.” In response to the boasting of Melinda Gates on the program “The View” a year ago, Anand Giridharadas tweeted: “A business like Microsoft might amass ‘that much wealth’ because it’s a monopoly that asphyxiates competition, making more money than a company that isn’t a monopoly and has to compete with rivals on cost. It amasses ‘that much wealth’ because it choked others’ chance to grow.”

Bill Gates is certainly an honorable man truly interested in that very American idea, “the betterment of mankind.” That noble goal persists as a latter-day transformation of the Leibnizian optimism Voltaire mocked in his satirical novella, “Candide.” The American version of “all for the best in the best of all possible worlds” doesn’t refer to society as it exists today, since Gates would be the first to admit that our great civilization hasn’t yet quite attained the ideal. It’s a work in progress. But it is being perfected thanks to the material gains of industrial progress and, of course, the generosity of billionaires.

Some may see a subtle historical irony in the fact that at the very moment Gates chose to wander away from the goose in Redmond, Washington, that laid so many golden eggs and use those eggs to focus on improving the world’s health and improving humanity’s education, what appears to be the worst of all possible health threats has led to the closure of almost all the schools in the industrialized West. Philanthropy has its work cut out for it.

In the past few weeks, the world’s billionaires have repeatedly had to wake up in the morning to find that they have less to be generous with. What they believed to be the best of all possible stock markets now seems to be sending them a message they weren’t used to hearing: that the world they created to enrich themselves before reaching out with fists full of cash to lead humanity toward utopia, may, like the city of Lisbon in 1755 that Voltaire refers to, be incapable of standing up to an unanticipated earthquake. Like Candide, they may have to change their habits and return to what Voltaire saw as the normal state of mankind, where people may act in ways that are “of some service or other” to the neighbors after learning to cultivate their own garden, a place where they can enjoy the simple prosperity of “eating preserved citrons and pistachio nuts.”

1
The ‘General’ Reputation of Indian Students Abroad Is…Not Good
2
Rich, Please: How The Pleas Of India’s Wealthy Seem ‘Fake’ To The Masses
3
When Trump Didn’t Have To Fake His Crowd-Pulling Swag
4
A Letter ‘From’ The Editor
5
Why Do We Neglect Where We Came From?
6
Anglo-Indians: Are They Fading into the History of India?
7

Indian Music…and all that Jazz
8