Bai empowerment: What you need to know about the new domestic workers’ policy that promises minimum wages, leaves and more

There is a huge disparity between the standards of living, and monetary compensation for those employed in this line of work in India, as compared to the largely organised domestic labour industry abroad. 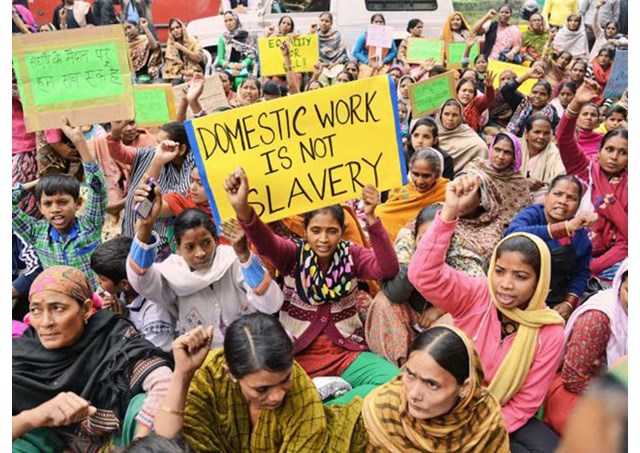 Amidst the crusade for a centralised policy for domestic workers, adequate compensation and rights still elude them. Credit: UCA News

The need for a consolidated body to oversee, and protect labourers’s rights has been lacking, particularly when it comes to addressing the concerns of domestic workers in India. In response to demands made by labour unions, and several NGO’s, that have called for a centralised policy for domestic workers, the Indian government has prepared a draft national policy, which is likely to be announced later this month.

The policy proposes to set up regulatory bodies at the state, district, or resident welfare association level, to guarantee fair terms of employment, standardised and minimum remuneration, protection against exploitation, and decent working conditions for domestic workers, by bringing them into the social security net.

According to the UN’s 2014 report, although several legislations such as the Unorganised Social Security Act, 2008, the Sexual Harassment against Women at Work Place (Prevention, Prohibition and Redressal) Act, 2013, and the Minimum Wages Schedules, refer to domestic workers, there remains an absence of comprehensive, uniformly applicable, national legislation.

The new policy envisages to affix a minimum salary of Rs 9,000 per month, compulsory paid leave of 15 days per year, and maternity leave benefits to full-time domestic employees. It also includes social security cover, including provident fund contribution by employers, medical insurance, and provisions against sexual harassment and bonded labour, according to Minister of State for Labour Santosh Kumar Gangwar.

“Discussions are underway regarding a national policy for domestic workers, including women with the aim to protect the domestic workers from abuse, harassment, violence and guarantee them rights in the matter of social security and minimum wages,” Gangwar told the Hindu.

Besides administering social security benefits for workers, the draft policy would also make recommendations on working hours, leave entitlements, and minimum wages. But, the implementation of the policy’s recommendations will be left to the individual states. The new policy will also reportedly encourage states to register and regulate placement agencies for domestic workers, thus winding up a legislative process which started in October 2017.

The quest for a central policy has been a decade-long crusade. However, the draft has only served to cause more frustration among both social workers and union members, who continue to battle the constant marginalisation of domestic workers. According to them, the policy does not address the inter-state disparity, nor does it mandate the constitution of a central board. Instead, the policy leaves it to the individual states to coin grossly disparate employment standards and social benefits.

Moreover, there is a huge disparity between the standards of living, and monetary compensation for those employed in this line of work in India, as compared to the largely organised domestic labour industry abroad.

For millions of women in this country, domestic work stands as a readily-available livelihood option. However, the working conditions that exist in this sector desperately require a re-haul. Many domestic workers are yet to be provided fair, minimum wages, weekly days off, and paid annual leaves.

Expected to toil endlessly, from morning till night, domestic workers in India can scarcely differentiate between a weekend and a weekday. Most of them are completely unaware of their basic human rights, that is due to any worker in this country. And, to top it off, their economic and social conditions are often exploited. West Bengal, Tamil Nadu and Andhra Pradesh reported the highest level of abuse against maids in 2012.

According to Subhash Bhatnagar, one of the convenors of the National Platform of Domestic Workers, 90% of domestic workers are migrants. These workers often travel long distances on a daily basis to make ends meet, and are expected to reprise the roles of parents and caregivers when they return home.

Savitri Sirdar, 34, commutes to Kolkata from the outskirts of the city every day. She works for seven households on a daily basis, just to be able to feed and educate her daughters, who are left to their own devices while she works. When asked about her expectations from the new policy, Sirdar told Qrius that she hoped the government would ensure that the benefits reach all women, like herself, as quickly as possible. She added, “If this is what it takes for our labour to be respected as work, so be it.”