Andhra Pradesh CM Chandrababu Naidu and DMK’s Stalin strike up an unlikely duo to face BJP: Here’s what is happening 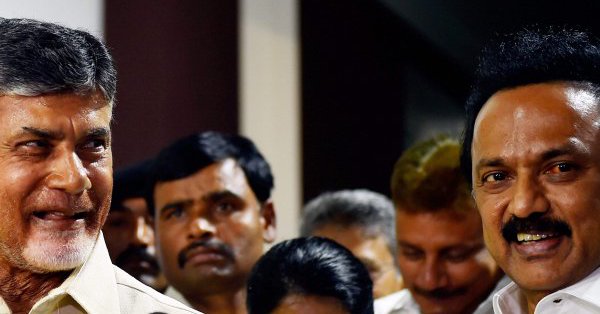 At the meeting, other DMK leaders such as Rajya Sabha MP M.K. Kanimozhi and M.K. Alagiri were also present. Stalin announced his party’s decision to support Naidu’s efforts to unite opposition parties against the ruling BJP-led NDA at the Centre.

“Regional leaders across India should immediately come together to oust BJP from power. Anti-national, anti-secular BJP rule needs to be stopped and Naidu has taken the efforts towards that. Naidu had met Rahul Gandhi. When he met Rahul, I had welcomed and supported it,” Stalin said, Times Now reported.

Naidu lauded the DMK leader as being better than Prime Minister Narendra Modi. When Naidu was asked whether he was the face of the alliance, he said “No, I am not the face of this alliance. You have to understand that. I am very clear I am not an aspirant, I am only a facilitator… I will bring everybody together. we will decide and take things forward,” according to a PTI report.

Congress is the main opposition party

Speaking after the meeting with Stalin in Chennai, Naidu said that he decided to join hands with the Congress to save the nation. “Congress is the main Opposition party. They have a pan-India base. We are regional leaders — Mamata Banerjee is strong in West Bengal, MK Stalin is strong in Tamil Nadu. We have had differences with the Congress in the past 40 years but we have joined hands because saving the nation and democracy is important,” Naidu said after meeting, India Today reported.

Meanwhile, Stalin promised to support Naidu in his efforts to create an anti-BJP front. “Regional leaders across India should immediately come together to oust the BJP from power. Anti-national, anti-secular BJP rule needs to stop and Naidu has taken the efforts towards that. When Naidu met Rahul Gandhi, I welcomed and supported it. Leaders from all states should unite against the BJP at Centre,” Stalin said, as per the India Today report. “I have promised complete support to Naidu,” he added.

The DMK’s decision to support Naidu comes after Stalin pledged his support to Rahul Gandhi. Stalin welcomed efforts to unite opposition parties against the BJP.

“Corrupt, autocratic and divisive forces are destroying the democratic fabric of our country. It is the need of the hour for all non-BJP parties to come together on a common platform,” the DMK president said in a tweet. He said further, “I congratulate @rahulgandhi and @ncbn for initiating steps towards this. They have my support,” PTI reported.

Calling it a “democratic compulsion”, CM Naidu met Congress president Rahul Gandhi at the latter’s residence on November 1. “We have to save the nation and defend democracy. It is a democratic compulsion and we have joined together to protect our country,” Naidu said, the Indian Express reported.

During his last visit to Delhi, Naidu had said no front was possible in the absence of a national party, thus hinting at an alliance with the Congress at the national level. Moreover, Naidu has approved a seat-sharing understanding with the Congress in Telangana.

After meeting Pawar and Abdullah in the afternoon, Naidu told reporters, “We must protect the future generations. There is a need to chalk out a programme for the future. We must act in the interest of the nation,” the Indian Express reported.

The electoral sweep by the ruling coalition in Karnataka will surely be a boost to the opposition, as the bypolls could be seen as an indicator of the public mood ahead of the penultimate 2019 elections. Naidu said Karnataka had set an example for others with the bypoll result, and the Congress will be hoping to replicate such coalition success in other states too.