A sea of farmers from all over the nation led by over 200 farmers’ rights outfits congregated in the national capital Thursday to march toward the Parliament. Following a series of similar demonstrations over the year, the 2-day Kisan Mukti March started on November 29 from Ramlila Maidan, with unprecedented support from student bodies, religious organisations and political outfits who clamoured to help the country’s agricultural community agitate for long-denied rights including loan waivers, and higher MSP (Minimum Support Price). 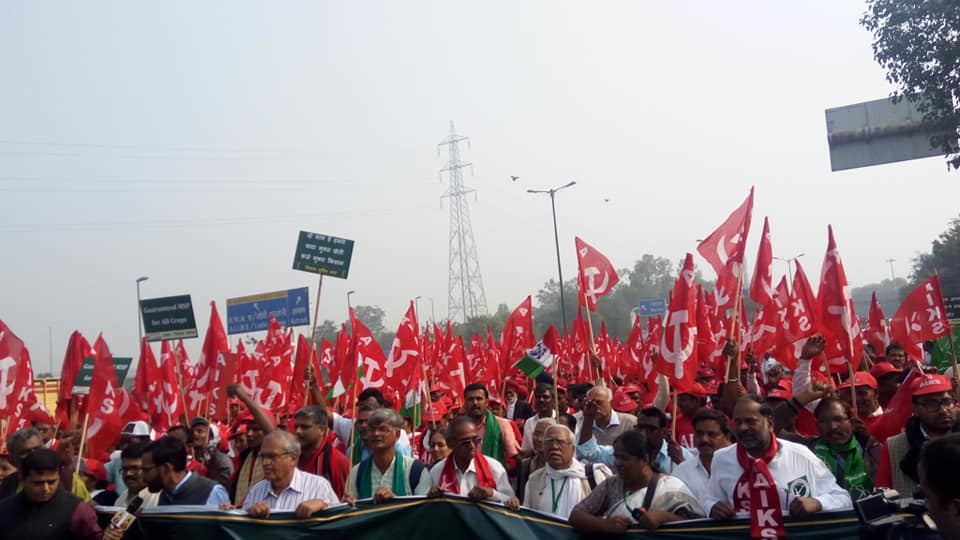 A sea of farmers from all over the nation led by over 200 farmers’ rights outfits congregated in the national capital Thursday to march toward the Parliament. Following a series of similar demonstrations over the year, the 2-day Kisan Mukti March started on November 29 from Ramlila Maidan, with unprecedented support from student bodies, religious organisations and political outfits who clamoured to help the country’s agricultural community agitate for long-denied rights including loan waivers, and higher MSP (Minimum Support Price).

Who came to offer support and help the organisers?

Separate camps were set up for farmers who arrived in Delhi from different states; food and drinking water facilities were set up by the AAP government activist groups, while gurudwaras offered refuge to the incoming protestors.

With the BJP notably absent and silent on the march, Chief Minister Arvind Kejriwal and Congress president Rahul Gandhi turned up to offer their support, although it remains to be seen if the opposition unity will hold up in the Parliament. Communist Party of India-Marxist (CPI-M) general secretary Sitaram Yechury, Nationalist Congress Party (NCP) chief Sharad Pawar, National Conference leader Farooq Abdullah and former JD(U) leader Sharad Yadav, and activist Medha Patkar also extended their solidarity to the outpouring of farmers.

Even Delhi University students part of political factions like AISA and SFI, pitched in as volunteers in vast numbers, serving refreshments, guiding incoming farmers to their camps, increasing awareness about the march and helping out organisers.

Agrarian expert P Sainath remarked that this movement marks a historic moment where farmers are moving from suicide to active protests.

He also added that farmer suicides fuelled by debts have reached record heights, while the Modi government continues to lie through its teeth on the matter of central subsidies (MSP) farmers get to offset low market prices. According to data, more than 142,000 farmers committed suicide in India in ten years leading up to 2016, with drought and lack of insurance making things more difficult for farmers in Odisha, Maharashtra, Madhya Pradesh and Gujarat.

The aim of the march, he said, is to bring these aspects of farmers’ distress into the national discourse and press for farmers’ demands as the winter session of the Parliament commences.

What are the demands?

Farmers have sought a special Parliamentary session to address and pass two Kisan Mukti Bills which propose (a)MSP be made a legal requirement, (b)the government buy all harvested crops, (c)a new debt relief commission to hold off debt recovery for up to three years in distressed areas, and reschedule and waive certain loans.

Who organised and participated?

Among the leading farmers’ bodies that mobilised and organised the march was All India Kisan Sangharsh Coordination Committee (AIKSCC), along with CITU, AIKS. The sheer numbers and diversity in participation suggest how miserably the agricultural economy of India has weakened over the last decade.

Not only were the streets of Delhi thronged by debt-ridden farmers; under-compensated farm labourers, agrarian families who lost a member to suicide, and indigenous communities ousted from their farmland for government-sponsored corporate projects also raised their voice against the centre’s targeted attack against the tillers and protectors of vegetative land.

Successive governments not paying farmers deserved price is the reason for farmers being forced to quit agriculture and do distress migration to urban areas in millions. Farmers distress is part of a plan to make them quit agriculture #DilliChalo #KisanMuktiMarch pic.twitter.com/eAy3kd0ptg

More than 100,000 farmers from Odisha, Tamil Nadu, West Bengal, Gujarat, Madhya Pradesh, Punjab, and Uttar Pradesh walked with resilience to tell the Modi government that their economic and agricultural policies are wrong. While some demanded an immediate implementation of the Swaminathan report that recommended loan waiver and higher MSP, others protested against the violence and police action inflicted on protestors in earlier chapters of the march. The predominant demand, essentially, was for pro-poor, pro-farmer policies from the centre.

A slogan that made headlines yesterday was “Ayodhya nahi, karz maafi chahiye” (“We don’t need Ram statue in Ayodhya, we want our loans to be waived”). With just months left for the 2019 Lok Sabha polls, the anger and resentment of thousands of farmers may be pose a threat to BJP’s current stronghold over India’s agricultural belt.

Prarthana Mitra is  a staff writer at Qrius.