All you need to know about Ram Mandir movement 2.0

Nearly three decades after the Babri Masjid massacre, right-wing affiliates of the ruling BJP-NDA alliance descended upon the religious site of Ayodhya in masses, ahead of the crucial Lok Sabha elections next year, to fast-track the construction of the Ram Temple in the contested site. 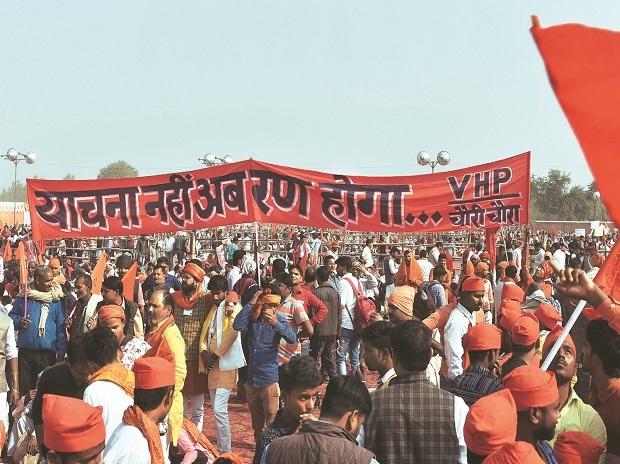 Nearly three decades after the Babri Masjid massacre, right-wing affiliates of the ruling BJP-NDA alliance descended upon the religious site of Ayodhya in masses, ahead of the crucial Lok Sabha elections next year, to fast-track the construction of the Ram Temple in the contested site.

Tens of thousands of Hindu monks and activists assembled over the weekend to agitate for immediate construction of the Ram Temple on the same spot where a 16th-century mosque was demolished by Hindu mobs, sparking catatonic tension between Hindus and Muslims in 1992. The riots had culminated in 2000 casualties across the nation, changing and defining the very nature of Indian politics to this day. Hindus and Muslims, however, continue to claim that their respective ancestors had the original claim over the disputed land.

Close to 50,000 Hindu activists, including those belonging to hardline right-wing groups like the Vishwa Hindu Parishad and Shiv Sena, congregated in Ayodhya to reiterate their decades-old demand in two back-to-back events.

The number is notably less than the one lakh-strong crowd that was expected, but the anger and frustration were palpable among young and old agitators alike. It was clear that these are the very sentiments that political parties helming the Ram Mandir Movement 2.0 are trying to harness.

In a further attempt to bring the dispute over back into national conversation in the run-up to the polls, Uttar Pradesh Chief Minister Yogi Adityanath on Sunday also cleared the ambitious Lord Ram statue project in Ayodhya, which is poised to be the tallest statue in the world at a  proposed height of 221 metres.

Although 70,000 police personnel were deployed across Ayodhya, the Muslim community, dreading a recurrence, fled the district ahead of the rally, amidst renewed calls to build the temple.

Legal history of the case at a glimpse

Hindu activism became more pronounced after the Supreme Court postponed the next hearing on the Ram Janmbhoomi case to January 2019. In 2010, the disputed land was split into three parts and distributed among Ram devotees, Sikhs and Muslims. Hindus were not satisfied with it and demanded the entire swathe of land for the temple. Back in 1994, another crucial observation noted that a mosque was not necessary or integral to the practice of Islam, which has made a comeback in the ongoing hearing of some 14 civil petitions.

In the absence of a verdict

Meanwhile, the Narendra Modi government has tried pulling many strings and various other avenues (including an ordinance) to claim ownership through extra-judicial means. Triggered by the judicial delay, several right-wing organisations asked the centre to bypass the top court’s ongoing proceedings and issue an executive order sanctioning immediate construction.

At the VHP event in Ramghat Chauraha Parikrama Marg, noted seer Rambhadracharya, who was awarded Padma Vibhushan in 2015, hinted that the centre would take take the final call after December 11, the last day of assembly polls.

He had been assured of action from RSS chief Mohan Bhagwat as well, “[…]the government will be pressurised for legislation in Parliament for temple construction. We want all MPs to be united. It shall be passed with two-thirds majority,” he said in his address on Sunday.

Why is the issue making a comeback?

The temple is a crucial election agenda for the BJP, which explains why MPs and senior lawmakers have scaled up their efforts to galvanise Hindus along religious lines before the nation goes to polls in January. This strategy is believed to have worked in 2014, when the party won 71 out of 80 seats.

Uttar Pradesh which elects more MPs to the Parliament is an essential state to retain for the BJP, but also where a strong coalition between erstwhile favourites SP and BSP is on the cards and can offer a formidable challenge. Under Yogi Adityanath’s controversial chief ministership, the BJP has lost several key local body elections, which only exacerbates the anxiety.

Over the weekend, Ayodhya was rife with SUVs clad in saffron flags, posters depicting war scenes from the Ramayana, and slogans resembling battle cries against the previous governments’ inability to get the project started. Shiv Sena chief Uddhav Thackeray attacked the Modi government, comparing their attitude to that of sleeping giant Kumbhakarna from the Ramayana.

The Sena’s rally on Saturday was followed by VHP’s mass mobilisation programme “Viraat Dharma Sabha”, drawing activists and zealots from across 48 districts in eastern and central Uttar Pradesh, who responded volubly to leader Champat Rai’s warning to the central government that Hindus are running out of patience and would not settle for anything less than the entire site for the temple.

Some seers even explicitly warned the judiciary from delaying any further, adding that indefinite lingering would weaken people’s faith in the legal process and induce them to take law into their own hands. “These are just pressure tactics,” Haji Mahboob Ahamad, a petitioner in the Babri Masjid-Ram Janmabhoomi land dispute, told Scroll.in. “They want to bring in a law and build the temple. But whatever the court decides is what will hold. Parliament cannot overrule the court.”

But one can no longer dispel the ghosts of 1992 easily. A very similar assembly had turned violent in 1992, after all. This gave rise to panic and fear among Muslims of the are, although Sunday’s congregation was modest by VHP standards. Yet, some of the local Muslims claimed this was the biggest build-up in favour of the temple since the mosque was destroyed.

The VHP, which had launched the Ram temple movement in the 1980s, themselves admitted that Hindus will no longer restrain from muscular nationalism. Invoking a past that the country is still reeling from and threatening to repeat the mistakes of history, anti-secularity sits heavy on BJP’s 2019 agenda, like a ticking bomb.