The twelve members of Thailand’s local Wild Boars youth football team and their coach had been trapped in the cave complex for the last 18 days. They had entered the cave for exploration on June 23 after a morning practice. (With inputs from PTI and Associated Press)

The twelve boys and their football coach who were trapped in Thailand’s flooded Tham Luang cave complex have been safely rescued, bringing the three-day evacuation mission to a successful end.

“All the thirteen Wild Boars are now out of the cave,” the Thai Navy SEAL said in a Facebook post. “We are not sure if this is a miracle, a science, or what.”

It has been confirmed that all 12 boys and their coach have been safely moved out from the #ThamLuangCave.#ThaiCaveRescue

The twelve members of Thailand’s local Wild Boars youth football team and their coach had been trapped in the cave complex for the last 18 days. They had entered the cave for exploration on June 23 after a morning practice. However, following heavy rains, the cave was filled with water blocking their return path. The boys were reported missing by their parents when none of them returned home and their bicycles were found packed outside the cave entrance. The search operations that ensued involved diving teams from across the globe. 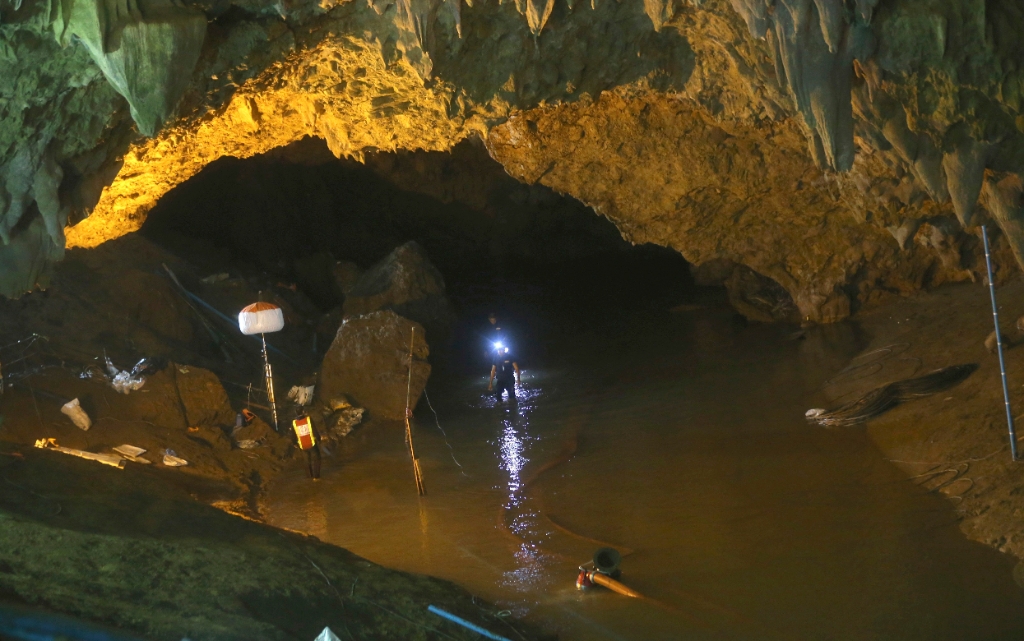 Rescuers walk out of the entrance to a cave complex where 12 soccer team members and their coach went missing, in Mae Sai, Chiang Rai province, in northern Thailand (Source: PTI)

Here’s the timeline of events

1. June 24: Search and rescue teams comprising local authorities, police and rescue workers find soccer shoes and backpacks left behind by the boys near the cave entrance.

2. June 25: As the search expands, handprints and footprints thought to belong to the boys are found farther from the cave entrance. Parents holding a vigil outside begin prayer sessions.

3. June 26: About a dozen Thai navy SEALs and others searchers penetrate the cave, but Interior Minister Anupong Paojinda tells reporters they are seriously handicapped by muddy water that has filled some chambers of the large cave to their ceilings.

5. June 28: Efforts begin to drain groundwater from the cave by drilling from outside into the mountain. A search for other entrances to the cave intensifies as diving is temporarily suspended for safety reasons.

6. June 29: Thai Prime Minister Prayuth Chan-ocha visits the cave site and urges relatives of the missing not to give up hope. Efforts to drain the cave with pumps make little progress.

7. June 30: The effort to locate the missing picks up pace again, as a break in the rain eases flooding in the system of caverns and more experts from around the world, including Australia and China, join the rescue mission. In anticipation of finding the boys, an evacuation drill is held to practice how they will be sent to a hospital after leaving the cave.

8. July 1: Rescue divers advance into the main passageway inside the flooded cave and set up a staging area inside. Thai navy SEALs reach a bend where the kilometer- (half-mile-) long passage splits in two directions.

9. July 2: Two expert British cave divers locate the missing boys and their coach. They record video of the boys talking with them.

10. July 3: The videos are released and show the boys taking turns introducing themselves, folding their hands together in a traditional Thai greeting and saying their names. The boys also say they are healthy.

11. July 4: Seven navy SEALs and a doctor join the boys with food and medicine. Options are discussed about whether the boys should be taken out of the cave with divers soon or kept in place until conditions improve.

12. July 5: The boys continue with diving lessons in case a decision is made to extract them through a route that is partially underwater. The effort to pump out water in increased.

13. July 6: Officials indicate that they favor extracting the boys as soon as possible, fearing further danger if they are forced to stay inside by more rain causing additional flooding. Concern increases about falling oxygen levels inside the cave. A former navy SEAL aiding the rescue effort dies from a lack of oxygen during his mission.

14. July 7: Officials suggest that an underwater evacuation will be made in the following few days because of predictions of a rainstorm. However, they say the boys’ diving skills are not yet where they need to be.

15. July 8: The official heading the rescue operation declares that “D-Day” has arrived as he announces the start of the operation to bring the boys and their coach out of the cave. Divers take four of the boys out through tight passages and flooded caverns.

16. July 9: Divers take four more boys to safety during the second day of the rescue operation. This leaves four boys and their coach still inside the cave.

17. July 10: On the third day of the rescue operation, divers bring out the remaining four boys and their coach, ending an ordeal that lasted more than two weeks.