The third chapter of Quadrilateral Security Dialogue, or Quad, was held on November 14 among member nations India, Japan, Australia, and the US, on the sidelines of the East Asia Summit (EAS) in Singapore. 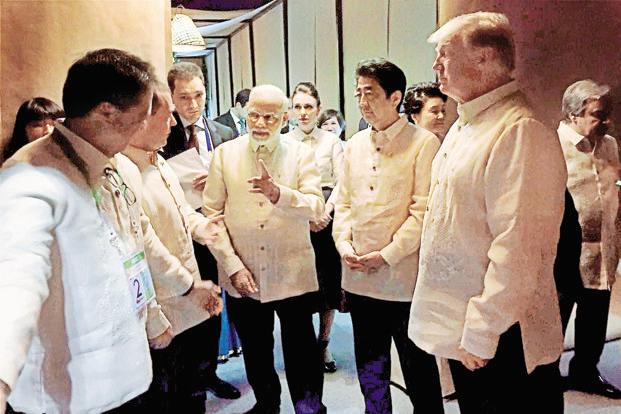 ASEAN summit in manila, 2017, where Quad was revived. Credit: Doordarshan

The third chapter of Quadrilateral Security Dialogue, or Quad, was held on November 14 among member nations India, Japan, Australia, and the US, on the sidelines of the East Asia Summit (EAS) in Singapore.

Agenda of the QSD

Ever since talks were revived last November, the Quad, an informal consultative mechanism, have already met twice, with the latest dialogue in June. All four member nations had solemnly agreed to meet every six months and discuss the current situation and progress with regard to security in their respective countries. The commitment and pace of talks has sparked concern among Chinese media that the quad may be the first step to an Asian NATO.

The primary aim of the QSD, after all, is to thwart China’s growing ambitions and advances in security and discuss measures to balance the power dynamics across the Indo-Pacific region. Earlier this month, the US, Japan, Australia and India had agreed to forge a coalition to contain Chinese maritime expansionism, by patrolling and controlling waterways along the Indian and Pacific Ocean up to the disputed waters of East and South China Seas.

History of the quad

The idea of the quad, first w by Japanese Prime Minister Shinzo Abe in 2007, was dropped after Beijing protested, saying a defence partnership with India would stifle China’s growth. After ten years of inactivity, it made a sudden comeback when senior officials from the four nations met in Manila on November 11, 2017 – on the sidelines of regional summits during US President Donald Trump’s maiden tour to East Asia.

What to expect at the dialogue

According to people familiar with the agenda, the meeting will be at the level of joint secretary as always. It will seek to reestablish commitments and efforts made in the direction of ensuring a free, open, prosperous and inclusive Indo-Pacific region. Senior officials of the four countries are expected to share their opinions on the geopolitics besides advocating the role of ASEAN in the Quad process.

Politicising cooperation in the region

This endeavour is in keeping with the US’ aggressive campaign against China on all quarters – from economic sanctions on Chinese imports at the cost of a trade war to mobilising the support of two powerful and emerging Asian nations to carve cross-border security arrangements against Beijing.

The Quad’s rebirth underscores the brewing suspicion and growing unease among diplomats in Washington, Tokyo, Canberra and New Delhi, when it comes to China’s meteoric military and economic advancements and growing assertiveness on the world stage. According to political experts, the growing alliance between these like-minded democracies has the potential to dramatically change the region’s security landscape.