The best films, literature or art on the Partition 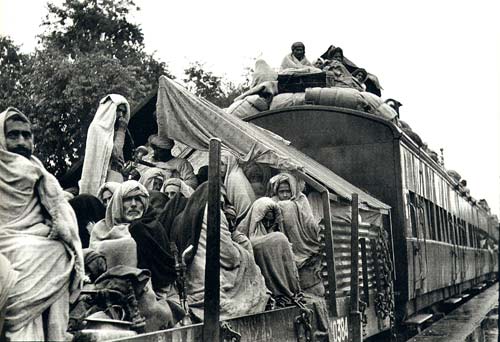 A refugee train on its way to Punjab, Pakistan. Wikimedia Commons

Editor’s note: At midnight on Aug. 14, 1947, India achieved independence from British colonial rule and Pakistan was created as a separate homeland for Muslims. More than 200 years of British rule had come to an end – a painful process in which some 15 million people were displaced and another million or more killed. The trauma of the Partition is seared in the collective memory of the two countries to this day.

For the 75th anniversary of this momentous day, The Conversation asked scholars from the U.S., Canada, France, U.K. and Australia to provide a list of the best Partition films, literature or art. Here are some recommendations:

1. ‘My Name is Radha: The Essential Manto’

Partition in South Asia refers to that horrific year when an arbitrary red line was drawn across a map by British colonial rulers – namely, the last viceroy, Louis Mountbatten, and Cyril Radcliffe, a barrister from England who was given five weeks to draw the line that severed India and created Pakistan. The violence of that crooked line has traumatized an uncountable number of people. I know some of this history through the lives of my own parents.

While writing my memoir based in part on the Partition and my parents’ childhood, I hunted for nonfiction books and memoirs written by witnesses, but when I found little, I turned to fiction and poetry. One of the most influential books for me was Saadat Hasan Manto’s “My Name is Radha,” a collection of translated short stories.

A former journalist and screenwriter, Manto was one among the millions who were displaced: Manto moved to Pakistan and wrote fiction about the lives of marginalized people. He wrote about Partition from the perspective of insane asylum residents and prostitutes and, in so doing, powerfully illustrated the unimaginable horrors and absurdities of Partition. He was tried in India for obscenity in his writing, but never convicted. He said, “With my stories, I only expose the truth.”

Salman Rushdie’s “Midnight’s Children,” which won the Booker Prize in 1981, the “Booker of Bookers” in 1993 and was judged “Best of the Bookers” in 2008, has not aged one bit. Translated into over 24 languages, the book was adapted for the stage by British directors Simon Reade and Tim Supple in 2003. In 2012, filmmaker Deepa Mehta brought out a cinematic version of it.

It is a must read on the multiplicity of India: There are as many dreams of India as there are people in this dramatically diverse land – plus the “moth-eaten” Pakistan, as founder Muhammad Ali Jinnah described it, with a divided Punjab and Bengal.

History, in this novel, is inseparable from story, as its protagonist Saleem Sinai was born on the same day as the nation. The twin hero of “Midnight’s Children,” Shiva, though he shares his name with one of Hinduism’s most important deities, is ironically the son of a Muslim couple. Yet this embodies the hybrid nature of identity in the subcontinent, which is almost always multicultural. The epic narrative also incorporates the history of Pakistan and Bangladesh, which was carved out of Pakistan in 1971.

Writing back to the empire, asserting its independence in “chutnified” Indian English, this masterpiece of magic realism borrows the device of the storytelling scribe from the “Mahabharata,” an ancient Indian epic.

“Midnight’s Children” thus remains an incontrovertible narrative on decolonization and the birth of new nation states.

Khushwant Singh’s “Train to Pakistan” is one of the most moving accounts of the Partition of India and the way local communities, which had lived peacefully for generations, were torn apart by the forces of communalism. As the Partition plan is announced in the summer of 1947, millions of Hindus, Muslims and Sikhs flee across the new border between India and Pakistan. Mass violence ensues.

“Train to Pakistan” is set in what at first seems like an island of hope: the imaginary village of Manmo Majra, on the border of India and Pakistan, inhabited primarily by Sikhs and Muslims. In the viciousness of the violence, this small village’s traditional social structure and relative harmony is destroyed to a point where all sense of humanity is lost. There is still hope, however, in the resilience of love.

One day, a train arrives from Pakistan, “a ghost train” full of corpses of Hindus and Sikhs. The Sikhs are provoked to retaliate, with a plan to murder en masse Muslims leaving the village on a train traveling back to Pakistan. But a local outlaw, Jugga – a Sikh – sacrifices his life to save the train. He does so because be believes his Muslim lover, Nooran, is traveling on it.

Deepa Mehta’s 1998 film “Earth” is a chilling story about the horrors of the Partition. Based on Bapsi Sidhwa’s novel “Cracking India,” the film revolves around three friends in colonial Lahore, in present-day Pakistan: Shanta, a Hindu nanny to a young Parsi girl named Lenny, and two Muslim suitors, Hassan and Dil. The film portrays how their carefree friendship is upended by the violent division of India, slowly turning them against each other and finally into enemies solely on account of their religion.

Several aspects of the movie provide viewers with a unique window into the ground-level realities of the Partition, which included, as one grisly scene shows, an entire train car of slaughtered Muslims arriving to Lahore. The narrative is presented via the recollections of a young girl who lived through the event. Lenny is also from a wealthy Parsi family, a minority religion in India and one that is not normally featured in Partition discussions. Her family’s naïve attempt to stay neutral during the conflict when the mob comes reflects the reality of times when not just Hindus and Muslims but every religious group was involved in some act of violence. It was almost impossible to stay neutral.

Finally, the film powerfully centers the narrative around Shanta. She’s last seen when she is abducted and taken away by a Muslim mob, and viewers never learn of her ultimate fate. Shanta’s story is a reminder that Partition was not just about religion or land, but also about widespread, underreported sexual violence against women.

Riz Ahmed’s album “The Long Goodbye” is a commentary on contemporary race relations in Britain. It explores British-Asian belonging in the context of rising racism and xenophobia, using the metaphor of a breakup. It takes a deeper look at the lyrical complaints of the dumped partner, whose pain and anger mirror the emotions of contemporary British Asian and Muslim communities – shot through with a historical awareness of the British empire and the Partition of India.

In the song “The Breakup (Shikwa),” “Brittney baby” is the partner who took the money (“my stash was a quarter of the cash in the world”) and labor (“my people built the west”, “fought for you in the war”), and yet seeks to disown “the new kids” (the South Asian diaspora in the U.K.). It’s impossible to separate what Ahmed says of the now from the then as he evokes the history of the equally impossible Partition of India. https://www.youtube.com/embed/A2tGEVwUuKw?wmode=transparent&start=0

Ahmed raps that during the Partition, Britain “carved a scar down my middle just to leave me stretched out.” It’s left a bloody legacy of conflict: “My Kashmir jumper still stained red” and “the bleeding never ends man.”

He highlights how seemingly overnight, Muslims in India and Hindus in Pakistan became foreigners in their own home. Ahmed notes in the song “Where You From” that this racist question takes on a deeper meaning for British Pakistani Muslims, whose ancestors survived the Partition’s displacement: “My ancestor’s Indian but India was not for us.”

Ahmed uses the Partition to lay bare the violence inherent in racist ideas of national belonging. “The Long Goodbye” dares listeners to learn from the past and imagine a form of belonging that celebrates being from “everywhere and nowhere.”